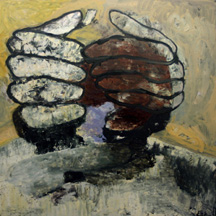 Sometimes in painting exhibitions, one piece jumps out to indicate a direction the other paintings might have taken but didn’t. This is the case at Jon Gregg’s show entitled Heads, Hands and Leaves at 55 Mercer. It is a painting entitled “Prayer” that finely balances form with motif to strong effect. One gleans, reassured by the painting’s title, that its bold black lines depict clasped hands. They float off center left on an impasto surface of chalky red umbers and ochers. Yet there remains a doubt as to the true nature of these lines. The roving touch with which they’re rendered imbues them with twists and turns that evoke clouds or rocks as much as hands. This ambiguity is where the painting’s strength lies.

The artist, who I had the good fortune to meet at the show’s opening, informs me that the painting was executed after viewing Philip Guston’s recent retrospective at the Met. It seems some of the latter’s painterly instincts rubbed off on Gregg in the painting “Prayer.” Those same instincts seem also to have worn out, for the paintings that follow are comparatively uninspired. Their surfaces are densely packed with Marsden Hartley-inspired leaves and heads inspired by a trip to Italy. The painting of the forms is generally crisp and clear, but they are stiff in execution and lack the freedom of “Prayer.” As a result, the repetition of forms seems staid.

Part of a painter’s responsibility is the criticism of his own paintings. This means viewing them with as cool an eye as possible, no easy task for someone passionately involved in the act of their making. It is easy to slip into viewing one’s work through the lens of what one desires it to be, to cease to see it as what it is. When this happens, the critical mind stops functioning and the painting loses its rigor.

It’s clear that Mr. Gregg has talent as a painter. His failing in this current show is in paying too little critical attention to his work. In “Prayer,” as in the portfolio of drawings strewn on a pedestal in the galley’s center, Gregg shows his strength in the expressive use of line. Some of the drawings have an affinity with Twombly, their frenetic lines moving with compelling vitality. The artist told me that many of his recent paintings had begun as these drawings had, free and gestural, only to be painted over with heads and leaves. It’s frustrating to see a painter forsaking his gifts in order to pursue ends better achieved by artists such as Hartley. Here’s hoping that Gregg’s enthusiasm for the latter’s work will not lead him astray, that from his hand might flow more paintings such as “Prayer.”

In this extraordinary exhibition, 18 paintings made between 1969 and 1979 are presented in two rooms.

Toying with horror, but relying mostly on witty articulations of the abject and the grotesque, Bridget Mullen positions herself at a very strange crossroads. Her contorted portraits and disjointed tableaux lie between the crisp geometricity of Cyril Power, Jacques Villon, or Tamara de Lempicka and the shaggy, blunt, and gooey cartoons of Don Martin, R. Crumb, and, most significantly, Philip Guston.

These works capture one significant period in Guston’s multifaceted career (or careers), hinting at the breadth of his artistic and intellectual reach.

The first thing visitors may notice about Roy Dowell’s paintings is the mystical aspect of the work—the ritualistic nature of the forms, even the otherworldly feel of the narrative that falls somewhere between the more abstract paintings by Marsden Hartley and the wild visions of the hallucinatory interstellar traveler Adolf Wölfli.