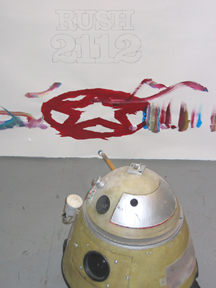 In the small back room of Leadbased, the artist-in-residence stands against the wall, paintbrush poised in its prosthetic hand, admiring four of its latest abstract landscape paintings. During the residency visitors can watch it make paintings, give lectures, and they can even mingle with it on Bedford Avenue.

Not bad for a robot. Operated from a distance by a unit made from a motley assortment of electronics including a radio car controller, a mini disc player, and a headset with microphone, the robot is essentially an extension of the person behind the controls. A speaker and microphone on the robot allows it to talk and listen; a glass eye can be used to make videos of viewers’ reactions to its seemingly intelligent personality. Two plaster casts of human hands mounted on the unit can be fitted to its three-foot dome shaped form, combining the look of Mr. Potato Head with R2D2 to create a general air of technological nostalgia.

All of the automation aside, where the robot really performs is when it is standing idle, contemplating its paintings from a nest sculpted into the wall out of seamless plaster. The completeness of the tableau in the gallery makes it seem superfluous that the robot actually functions. Also part of this scene is a supercomputer that appears to be made from an air-conditioning vent with multicolored lights flashing from within the wall where scratchy voices and white noise crackle intermittently. It is this nostalgic portrayal of technology as a tableau that gives the exhibit its allure, since the robot is idle the majority of the time.

The contemplation of an artist’s environment brings to mind the dioramas of Joe Fig. Fig’s hyper detailed dollhouse-scale reproductions of studios of well-known artists give us a perspective on conventions of art making that are often taken for granted. It brings forth the status and importance that these mythical settings can afford to the overall aura of the work. The front room of Leadbased, devoted primarily to the new wave of functional/fashionable art/design blurring products dictates the robot’s aura of this robot. In this context the robot reads more as a farce and maybe a comment on what can be seen as outmoded conventions of making art from a designer’s perspective.