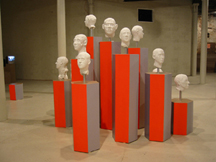 The initial effect of Halsey Rodman’s show at Triple Candie is an agreeable kind of confusion. There’s a lot of different stuff involved, from big sprawling assemblages to videos to figurative sculpture. Everything has bright, friendly colors, and simple repeating shapes, and you can tell it all has a purpose even if you don’t know what it is. After a few minutes with the work, things get clearer as the logic of the show asserts itself, revealing a practice that casts substantial ideas about being and thinking in an accessible pop language.

The terms of the show are outlined in a series of short stories, penned by the artist, that read like Kafka with better special effects: a being, K, is “called to a distant planet to do a job,” but is thwarted by obscuring mists, navigational failure, bodily dissociation, and an infinitely-receding castle. Each text breaks off as the narrator/protagonist experiences an ambiguous physical transformation: undergoing some form of self-multiplication in one scene, dissolving into mist in another.

These video game-like scenarios let you engage the sculptures as either props for a fiction or conceptual puzzles that elaborate on the artist’s primary themes: state change and disembodiment. There is an effective and appealing no-frills sensibility to the way Rodman builds things, and this prevents the works from drifting into pure fantasy. “The Star Well” has as its central element a long tangle of colored, light-tipped wires emerging from nothing more otherworldly than an empty six-pack of Presidente beer affixed to the ceiling. “The Planet of Mist Seen from Three Angles,” the sole photographic work in the show, suggests a makeshift set for a low-budget film. The title piece, “K is Multiplied,” consists of twelve plaster busts of the artist displayed on colored hexagonal pedestals, sculpted from life by friends and colleagues. It is accompanied by two digital videos documenting the three-hour sculpting sessions, sped up to frenetic ten-second loops.

In all of the work in the show there is a tension between what each object “is” in terms of the narrative—an alien planet, a deep space vortex—and the decidedly terrestrial, ad-hoc way it is made. This is part low-budget sci-fi, where being able to see the wires from which the UFO is suspended only enhances our enjoyment of the illusion. But it’s also part Brechtian theater, with an aim of keeping the audience awake and critical rather than pacified by the spell of the drama. Rodman’s insistence on the physicality of things suggests that he wants to make sure we are dealing with the work as sculptures, not signs. Our experience of looking at the objects, walking around them, experiencing them in time, reconstructing how and why they were made, is as important as our acknowledgement of their narrative purpose. It’s also clear that the sci-fi/fantasy language is a way to refocus our attention on the transformations and dissociations that happen on our own planet, particularly the way that existing in a culture where images replace objects can create a feeling of dislocation like you’ve crash-landed on a bizarre and perplexing world.