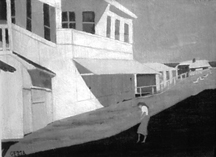 Unreal, give back to us what you once gave: The imagination that spurned and crave
—Wallace Stevens

Gerta Conner’s retrospective (1960–2003) at the National Arts Club was an unusual exhibition, demanding strenuous effort just to situate her paintings in the context of a particular time or movement. Nevertheless, Conner’s work compellingly evokes the minute differences between naiveté, which pertains to the imagination and which Baudelaire regarded as the queen of all the faculties, and the trained eye, which Conner cultivated during her formal studies with Hans Hofmann and Ralston Crawford.

Trying to decipher Conner’s treatment of landscape, the predominant theme with the exception of an interior and a cityscape, I found in her work a discreet charm and economy of expression. On the one hand, her work gravitates towards a style of delineation that derives from certain aspects of realism rather than naturalism: they appear to be objective statements of facts from the observable world to which the artist’s lack of technical polish gives an appearance of idiosyncratic fantasy. On the other hand, Conner has a real knowledge and awareness of the two-dimensional reality of the picture plane: she favors the reduction of forms rather than the analysis of them. Conner also perceives subject matter as the true construction of her aim, as if art, like all daily activities, cannot help but express the common thread of our social life. The strength of these pictures lies in the recalcitrant imagery and the artist’s determination to get it down onto the canvas.

Conner relies on the rotational pairing of imagery, and one finds, for example, a young ballerina with a butterfly, a wolf with a figure, or a wolf with a house. In “Lady by the Pond” (1994), a relatively small and narrow work, a completely immobile woman stands in profile like that of an early gothic statue from the portals of Charters cathedral, and right behind her is a pond with two swans in the far left. “Playing” (1999) is a painting that displays Conner’s painterly economy and combines both the frontal usage of light and the simplicity of pictorial means, reminiscent of the work of Fairfield Porter and Francis Alexander, the great American folk painter of the nineteenth century. Apart from the painting being divided into two flat planes by the strong horizontal lines, the feeling of isolation of the whole narrative is intensified by the distance between the chaperone and the two children at play in front where their feet are painted right on top of the bottom edge of the canvas. This is even more pronounced in “Isolated” (1996) and “Asbury Park, Off Season” (1980), both of which include a lone figure set in an unlikely yet somehow congenial environment. While the former shows a nude lying in the forest with multitude of shadows cast at different angles, nearly bringing the whole climax to its dizzied and dramatic peak, the later contrasts a limping woman, again in her left profile, delicately emerging from the strong diagonal shadow into the bright light of the empty town.

I believe that all the images that appear in Conner’s paintings have symbolic significance rather than being mere formal inventions. They belong solely to the painter’s private domain, one that functions like a conduit into her internal condition. And as far as time and space are concerned, these paintings can never be seen as archetypes, but rather as concentrated glimpses. They are not connected to any categories, nor are they concerned with calculated production. Instead, they express an attitude towards life. In Conner’s world, freedom simply means being, and she constructs her paintings accordingly.

Lytle Shaw’s engrossing New Grounds for Dutch Landscape is a poetic revision of no less than two centuries of in-gazing art history. On the occasion of the book’s publication, the Rail has commissioned exchanges with some of Shaw’s interested readers.

When you google “land art” one of the top options features two photographic examples: Robert Smithson’s monumental Spiral Jetty (1970), perhaps the paradigm for the genre, and Alan Sonfist’s Time Landscape (1978). Smithson’s earthwork is a massive and muscular transformation of terrain set in the vast open area of Utah’s Great Salt Lake. Its image is quickly identifiable, iconic. Time Landscape is modest, non-iconic, and set in the heart of an urban metropolis.

m i c c a and the Landscape of Grief

In a winter forest of evergreen trees on Far Rockaway Beach, P I N E exercises our collective losses.