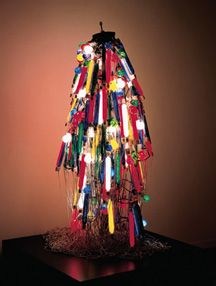 A piercing bell breaks the silence in the gallery. It sounds like a fire alarm or a high-pitched human scream, startling, warning, terrifying, a harbinger of destruction. Then abruptly, the sound stops. I round the corner and see a sign—“press here.” Obeying instructions, I jump as the siren returns. I realize I have caused the sound, and the excitement of my transgression mixes with embarrassment.

Atsuko Tanaka’s retrospective opens with “Work (Bell)” (1955), a lost piece that was recreated in 2000 and is presented beside a series of elegant preparatory drawings that plot the cogs, wooden wheels, and numbered sequences of its mechanical core. The clangs of “Work (Bell)” set the tone for the exhibition’s charged environment and aurally define the physical parameters of the space. In addition, they lay the framework for a body of work that consistently addresses issues of time, space, sight, and sound. The interactive work also foreshadows Tanaka’s confrontational stance with her audience, the directness of her presentation, and the honesty of her compositions. And it neatly demonstrates the way people accustom themselves to pain and suffering; the bell—so shrill and disruptive—doesn’t change, but as it continues, perception of it does. In repetition, it is dulled to the point of background noise.

“Work (Bell)” suggests an essential and active relationship between art and the viewer, and no demarcation between art and life. Tanaka nimbly invites awareness into the everyday world without pretense or posturing, and questions the definitions of artistic practice. For instance, on view are three versions of “Work (Yellow Cloth)” (1955), commercial fabric panels cut directly from the roll and affixed to the wall. They prefigure Blinky Palermo’s Stoffbilder paintings, begun in Germany in 1966, and raise questions about the assumptions of painting that would come to the fore in the following decade in the West: the relationship between support, frame, and picture plan; the notion of surface flatness; the implication of readymade, found, or commercial form; and the belief of artist as creator. Like three untitled paintings from 1956 where large Xs renounce a circle, a square, and a rectangle, “Work (Yellow Cloth)” feels simultaneously like an impassioned renunciation of the past and the triumphant declaration of a free future. Re-hung fifty years later, its daring audacity remains.

These early works were some of the first pieces Tanaka made after joining the Gutai group in 1955 (she would remain a member until 1965; the group itself began in 1954 and lasted until 1972). Gutai’s English translation is concreteness, from Gu—tool or means—and Tai—body or substance; the definition seems to embody the spirit informing the works on view at Grey Gallery which span 1954–1968. Brought together by Jiro Yoshihara, Gutai was concerned, among other things, with chance, materiality, and active art making in pursuit of experimental embodied painting. Deeply engaged with issues of time and space, the Gutai artists demonstrated irreverence towards traditional art venues and exhibited in group annuals which were staged, sometimes over weeks, in theaters, outdoor parks, schools, and other non-traditional spaces. As often as not, an art object was made through performance, usually to be destroyed after, and there was an evident preoccupation with developing formal renderings through bodily or mechanical means.

Tanaka’s performances often involved experimental clothing. Conceiving of her body as a malleable painting, she would strip and peel layers of different colored fabric off to create shifting formal compositions of color. Most famously, in 1956 she built “Electric Dress,” a sheath of incandescent light bulbs painted in primary hues. Recreated in 1986, it is both grotesque and beautiful. It emits an intense heat, and the cords weave dangerously in and out of the frame like a thousand electric eels. Though Tanaka created a protective armature for her body so that the bulbs stood away from her skin, it is impossible to look at the outfit and not fear the terror of electrocution.

In the twelve years after Japan’s devastating surrender in the wake of two atomic bombs, Tanaka witnessed a consumer revolution in her country, fueled in large part by American consumption during the Korean War. Though “Electric Dress” was inspired by the many neon advertising signs appearing across the county, it demonstrates a clear ambivalence about technology, a perception that it is equally alluring and repulsive. The colors are absurd and clown-like, and, like the crude crayon drawings made after the performance, “Electric Dress” pairs childlike fascination with the assured artistic decisions of an adult.

There are many of these incredible drawings on display, which regrettably reinstate the significance of “Electric Dress” as Tanaka’s singular and most famous form. Rendered in black or primary colors, they obsessively rework the electric wirings and brilliant lights of the costume, and suggest a desire to defuse the power of technology, either through understanding its intricate mechanics or through transforming the horrible into something beautiful. However, they also reposition the dress and Tanaka’s performance in it as an artistic turning point. The constant repetition and exploration in the drawings reveal the process through which she found her mature style and show the genesis behind the geometric shapes and skinny lines which comprise the vocabulary of her paintings.

The canvases are crowded with circles and winding lines. Made with the commercial enamel paint of advertisers, they are slick, smooth, and almost impenetrable. Tanaka’s range of colors grows to include more muddied hues as the years pass, and she also experiments with shaped canvas. Though it’s tempting to make comparisons with another postwar Japanese art doyenne, Yayoi Kusama, there is none of the frenzied anxiety of Kusama’s spherical worlds; Tanaka’s compositions are rarely chaotic. An extraordinary film from 1968, Round on Sand, shows Tanaka making circles and lines on the beach with a long stick. Remarkably similar to Joan Jonas’s beach work in the early seventies, the film is an invitation to observe Tanaka’s sure and steady marks, and the intuitively graceful and methodically precise manner behind her compositions.

In an illuminating catalogue essay, guest curator Ming Tiampo suggests that through the Gutai’s support of her performance, Tanaka came to free herself of the belief that painting was “a transparent expression of the soul” and return to the medium unencumbered. The main exhibition supports this assertion, and the study room at Grey offers a nice addendum by displaying a collection of Gutai ephemera, film, and photo documentation. What is suggested by the astonishing acts on display is a group that was mutually encouraging, full of bravura, ripe with ingenuity, and far more prophetic than history has credited them for being.