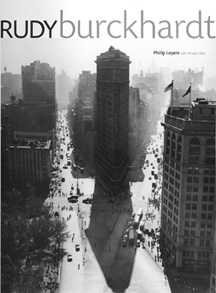 I always wondered why Rudy Burckhardt’s photographs were not included in Edward Steichen’s legendary exhibit "The Family of Man" in 1955, which showcased every photographer under the sun and across the globe. Phillip Lopate recently revealed the answer. Prior to his film retrospective at the MoMA in 1987, Burckhardt was asked by the museum’s curator of photography department, Peter Galassi, “When was the last time, by the way, you brought any photos to our curators?” To which Burckhardt replied that the only attempt he made was in 1950 when he showed some of his Mexico travel prints to Steichen, who was unimpressed. “They don’t like my stuff,” Burckhardt concluded.

This is one of the all too common missed opportunities for major institutions as well as the mainstream art world in to recognize the importance of lesser-known figures like Rudy Burckhardt. But then the reason for this is aptly summarized in the title of Robert Storr’s essay, “The Gentle Art of Pleasing Oneself,” for Burckhardt’s retrospective at the Institut Valencia d’Art Modern in 1998. Rudy Burckhardt, besides being a first rank photographer, was also a highly accomplished filmmaker and painter. He was an artist for whom social ambition seemed to be remote as a tree in Maine to a Manhattan skyscraper. He strove with none and thrived on the freedom of amateurism and the illusive beauty it produces. Yet, in his homegrown, pantheistic view of man and nature, Burckhardt always managed to instill in his work the most compelling observations of both worlds in complete harmony. The same thing can be said about his social life: his democratic attitude towards life allowed him to be an integral part of a tight-knit circle of friends which included celebrated artists and writers such as Willem de Kooning, Edwin Denby, Alex Katz, Jane Freilicher, Kenneth Koch, Frank O’Hara, and members of the younger generation like Vincent Katz, Simon Pettet, and Eric Holzman.

John Ashbery once wrote that Rudy Burckhardt, “has remained unsung for so long that he is practically a subterranean monument.” This long overdue monograph of his entire oeuvre—with insightful texts by Phillip Lopate and Vincent Katz, both of whom have been long time champions of Burckhardt’s work—is the most comprehensive book to date on this enigmatic figure of American counter-culture.

Thoroughly reconstructing the chronology of Burckhardt’s work, from his arrival and New York from his native Basel in 1935, the book includes the substantial body of early photographs of New York in the late 1930s, numerous pictures from his travels to Haiti, Mexico, Morocco, and other countries in Europe, his important still photographs and movies which involved collaboration with his close friends, and finally his paintings. Lopate’s detailed analysis of Burckhardt’s life and work is a fluid and stimulating read. Without being heavy-handed in trying to contextualize Burckhardt’s work, Lopate fashions an engaging and sensitive account of how reluctant Burckhardt was to be placed in the photographic cannon. A strong, expressionist pathos, and an explicit social-consciousness drives the work of Walker Evans, Berenice Abbott, Weegee, Helen Levitt, Sid Grossman, Robert Frank, Garry Winogrand, and Diane Arbus, just to name a few. Burckhardt’s work, on the other hand, as Lopate has suggests, “is lighter in every sense: more playful and tender, less melodramatic, more true to the spirit of the everyday.” This lightness, which is permeated by a deadpan casualness, pervades the work, from the surreal portrait of Edwin Denby sitting on the rooftop of their 21st Street building, to the quasi-formal composition of storefront windows, street scenes with incidental pedestrian feet interlaced with lamppost shadows, the famous aerial views of Astor Place and the Flatiron building, intimate pictures of artists in their studios, travel photographs, and even the experimental nudes. His diptych “A view from Brooklyn, I and II” (1988) is one of the most poetic pictures of an artist’s studio—impoverished genteel but endowed with dignity by God.

Burckhardt’s film opus has yet to be seriously dealt with. In two lengthy essays, “The relationship between the still photographs and the movie” and “The Diary/Collage Films,” Lopate has pointed out that Burckhardt’s openness to an automatic response to his subjects was the key to the natural flow from the street photography to the films. By operating without consciousness of compositional devices and without premeditation, Burckhardt’s pictorial sensibility as a whole attained “less the decisive moment (in Cartier-Bresson’s famous formula) and more just-a-moment.” This quality became even more explosive in a 30-minute film entitled A Nude Pond, a favorite among Burckhardt admirers.

In Vincent Katz’s illuminating words in the Introduction, “Burckhardt’s art should be seen in its totality to appreciate his full achievement.” For those who are already familiar with Rudy Burckhardt’s work, this book is a long-awaited reward, and for those who are yet to be acquainted with one of America’s great discovery, the combination of the insightful texts and the artist’s beautiful reproductions is a compelling experience.

Click here for interview with Rudy Burckhardt by Paul Mattick>>>