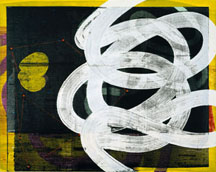 Neither in concepts nor in language does anything ever stand isolated. But concepts actually become related only when the personality acts in inner unity, when full subjectivity radiates toward complete objectivity. When the soul actually awakens to the feeling that language is not merely a means of exchange for mutual understanding, but a real world, which the spirit must set between itself and objects by an inner exertion of its powers, the soul is on its way to finding more and more in language and to putting more and more into it.
—Wilhelm von Humbolt

Thomas Scheibitz announces his seriousness with a dangerous looking boxy wall piece that juts out into the entryway of the Bonakdar Gallery, where his fourth solo show in New York opened last month. The pointed triangular end of “Follow” forces us aside and signals the risks involved in being unaware; at the height of cool, its casual painterly surfaces reveal the pleasure in doing so, yet the painting it points to is the weakest in the show. It’s at a larger scale that Scheibitz finds his stride.

Scheibitz had over a year to work on his tour de force and described the conditions as ideal. Everything found its place. In the central gallery, though not immediately recognizable as such, a digitized map of the world in warm and cool greys floats airily while grounded in a wealth of known and unknown undercurrents. It’s a painting with a grand vision, from a painter born in the East who seems not to have registered that painting was ever deemed capable of anything else.

Divided into three horizontal sections, “Map I (Old Map)” correlates information at radically different scales. What looks like the floor plan of a simple apartment in the top band sits alone, while multiple similar shapes represent Holland, Senegal, or Brazil. On the bottom a stylized letter N breaks the boundaries of the tripartite divisions in which a charted land mass is divided with a beautifully timed drip that lands where the solid divides from the outlined, the white from the black. The map is out of proportion—Canada seems to be absent, and the apartment is bigger than Japan—yet as we navigate this world a myriad of thoughts arise.

The complexity of this painting and its ability to sustain attention stands in marked contrast to “Sundial,” a kaleidoscope of colored pie pieces just to the left that references time rather than being in it. This shift reveals the limits inherent to the method of abstraction that grounds Scheibitz’s endeavor in the process of translating from the collective image bank. Is the truth located in the source material or is Scheibitz’s process capable of generating his own? While “Sundial” recalls Bosch’s “Seven Deadly Sins and Four Heavenly Virtues” with its outlying circles, the methodology of translation doesn’t serve here as a tool for plumbing the depths and we quickly move on.

“Map II,” with its barque-like superstructure heading out for the great beyond, suggests the possibility of charting indeterminacy as it shifts from a plan to the classically oriented view and looks through an oval window. Schiebnitz has developed vocabulary elements that point to his own roots, like the series of stacked rectangles that he deploys to locate the urban in the midst of a swirl of painterliness. Figure forms interact with building forms creating spaces that weave in and out, landing us finally in the interstellar when a touch of lavender surrounded by black and encircled in white spray paint reorients scale. The grand curve-cum-barque suddenly reads as the electromagnetic shield on planet earth.

In and among these paintings a long skylight-like form perched on gables sits low in the room looking upwards. Its end, painted to resemble a clouded sky and then painted over with neon red, creates an analog to the object itself and suggests a correlation between paint and form. This glimpse of an idea renders the slap-dash painting of the other objects less convincing, which is not to say there are not beautiful moments here when yellow or bright orange peek through the end of a sheet of red painted board, or when pink and green share the surface of a plane.

The painting that pulled me back in to have a second look however, hangs in the back gallery. There is an unremitting search for form in “Stella,” grappling to define itself in painting and reflect back on our own time in a way I haven’t witnessed for a long time. There is a surety in Scheibitz’s marks that speaks to a coming to terms with space and form in painting, as if that were worthy of one life’s endeavor.

“Stella” starts out low in the right hand corner where a greyed-down green transforms itself from the ontological to the representational over the height of the canvas. Rising from a frontal view of flat paint to an aerial perspective, it makes its way through and around the starburst that forms the painting’s central motif. It carries us through looking at some characteristic brick imagery straight on to looking down on the starburst. The subtle modulation of rich greys and blacks on the painting’s left side is where this painting breathes; they help to punctuate the sweeping transformation that ends in a crescendo of swirling bright green brushstrokes, invoking a Challenger’s vista. It’s a grand gesture that maintains a safe distance from the grandiose.

“Game,” which hangs to the left, is a much larger painting, its colors finely honed and playful. Tiny bits of neon yellow offset a whole expanse of blue violet and stripes of rocket red stream through the white ground. Associations are plentiful here, but nonetheless we remain on the surface. Contextualized within this exhibition, it adds pop to what otherwise might be read as a classical bent.

Scheibitz’s drawings expose us to a wide range of his interests and give clues about the development of specific forms. These idiosyncratic and quirky studies provide a sense of the personality of the artist. Bringing to mind Martin Kippenberger and Rosemarie Trockel, they help to locate him within a tradition.

A few blocks away, David Row opens the season for Von Lintel. His new paintings seem lighter and more expansive, depth has replaced flatness without compromising the solid foundation Row has built for himself; mirroring has given way to an exploration of paired relationships. The colors are jarring as you enter and yet extremely specific; they mark a shift from a major to minor key in Row’s palette.

The screaming yellow ground in “Inside Out” is tamed by the interplay of peachy orange and crimson meanders; on the left lightly drawn geometric forms float while floating dots claim their side of the composition in a nod to abstraction’s long held autonomy of organic and the geometric forms. Just off center, a small red circle lies tangent to the overbearing crimson meander and then opens up to a cosmic dimension that evokes the interconnectedness yet separability of time and space. Working with simple elements, a circle, a triangulated geometric form, the meandering brushstroke, and his grounds, Row posits a number of different spatial relationships between them, and in doing so is able to bring forth conditions of intimacy.

“Radiating World” calmly holds down the front room, it’s luminescent geometries run parallel to the canvas edge; there’s a playfulness here that comes in as a pretty girl pink swept over a spring green and renders a depth that is photographic. The grey-green forms create chance configurations that conform to the desire of these two colors to separate. The eye searches out pathways and forests in them, using memory to aid in the process. Color and form have achieved an equilibrium that causes the classic hierarchy to teeter.

“Body and Soul” stayed with me after the opening and I found myself coming back to the complex web of relationships between its two forms. On the left, a solid embryonic form located within the boundaries of a circumscribed geometry has just the twists and turns needed to give it a sense of life. Its similarity to and difference from the white meandering brushstroke that forms the painting’s other half initiates a back and forth dance for the eye that leads the mind back to the paintings title. Scraped over a dot screen, the painted substance of the meander gives detachment, and like the construction around the embryo creates a perspective from which we can contemplate the subject.

When the logic developed out of Row’s fixed vocabulary limits rather than expands our spatial experience it falls flat. The aptly titled “No Promises” disappoints. An autocratic green meander ties the blue circles to its path and the symmetrical geometry of the ground is incapable of the levity or breadth that would render it a counterpoint.

A lime yellow-green scraped over a full-bodied yellow (the color most commonly associated with accidents) forms the ground for a wide carmine lacque stroke. Orange circles float in the field as a thin white line meanders beside and below the deep-set red one. In “Tantric Pair,” Row’s structure hints at the complexity visible from the longer perspective that life gives us. Symmetry has given way to a notion of the pair as qualitatively matched; the brightness of the impasto white keeps time with the broad fluid red, their pairing speaks of the inherent as opposed to the obvious.

In “Waves of Desire,” multiple layers of Row’s new meandering lines set up subtle shifts in color from underneath an ebullient orange ground. Barely visible this undercurrent provides a distant echo to the racing blue on the surface. In and among these interwoven meanders, five yellow circles locate spatial coordinates to render depth palpable. There is solidity here in a field of lyricism that makes laughter seem like the most profound emotion on earth, a joy in the resonant possibility of color and its ability to lift the spirit.

Row worked on these paintings all summer while kids, often just looking for a way to finance their education, were being shot down half way around the globe in a grandiose miscalculation. They do not betray the gravity of their time so much as they show us how to alleviate the weight of the soul without excess or decadence.