Beside The Rose: Selected Works by Jay DeFeo

Can we compare it with Gertrude Stein and Marcel Duchamp? "A rose is a rose is a rose," expressed the former in her terse, illimitable prose. Her parallel was a case of androgyny who proclaimed himself "Rrose Sélavy" in 1921. Some decades later, Joseph Beuys would articulate his concept of social sculpture by saying, "Without the rose, we cannot do it." But the most personal of all comes from the artist Jay DeFeo, who tells us, "I see ‘The Rose’ as the central effort of my life." Indeed, the twentieth century has delivered many avant-garde roses, some more explicit than others, some more bereft. 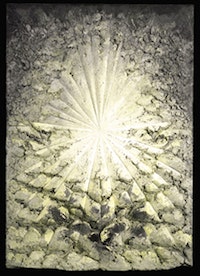 Within this contemporary climate of ubiquitous international biennials, Artforum roundtables on the concept of artworld "globalism," and even a new required reading critical theory text addressing the slippery topic of 21st century global socio-political thought— Hardt and Negri’s Empire— the Museum for African Art’s "Looking Both Ways: Art of the Contemporary African Diaspora" couldn’t be more timely. 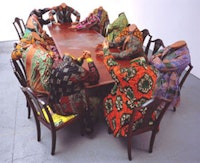 Considering the amount of discussion and hype caused by John Currin’s mid-career retrospective at the Whitney, it seems that the all too often recited "painting is dead" phrase is not only reduced to an expression of 1990s angst-history, but even replaced with a jovial "Realism is back!" Not unlike the previous two centuries, our post-turn-of-the-century society generally expresses a craving for romanticism and nostalgia. 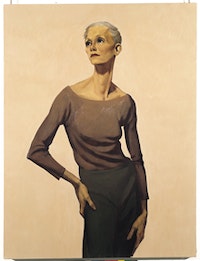 Arthur Danto in After the End of Art speaks of Postmodernism as the state in which art and its perception are beyond the "pale of art history." Now we have art that has been withdrawn from the pale, the garbage pails, of Williamsburg’s art galleries. Dumpster diving, or garbage gazing, till now was a device used by brash paparazzi, or sleazy private dicks to cull clandestine information not forthcoming in polite conversation. 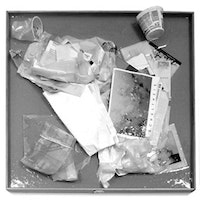 Let’s begin by dropping some stock material and abandon, for a moment, dystopia, information theory, or recalling Piranesi’s prison etchings for the umpteenth time, along with metastasizing mutatis mutandis and all of the Popular Science pseudo-scientific (scientistic really) rhetoric that sticks so easily to the toothy surfaces of Terry Winters’s work. Winters is an important artist. His paintings have proven relevant because they reveal the often invisible operations of the wilder, real and artless avant-gardes informing every aspect of our culture now. Clearly, few artists, let alone an abstract painter, can ever honestly make such a sweeping claim. 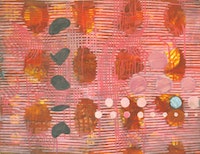 From modest pale pink silk tucked away in the "Intimates" department of Bloomingdale’s to fetish leather and red lace in the window of Trash and Vaudeville, lingerie is ultimately nothing more than a support system, the fabricated foundation of the modern female form. 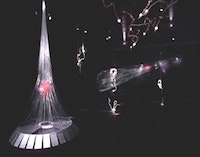 In Bellwether’s pristine space on Grand Street, Mala Iqbal’s paintings are alluring and even titillating. A Staten Island native, she says in her artist statement that her work is partly a product of her childhood environment.

In Loose Ends, David Opdyke is a sculptor with a cause—the complete and utter failure of the current administration’s foreign and domestic policy. Opdyke’s lacerating vision is unleashed in a variety of highly detailed and specific critiques of what might be viewed as U.S. policy meltdown. 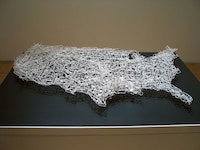 Guy Richards Smit’s musical alter-ego, Maxi Geil!, and his band PlayColt, perform their rock videos in A Message to my Audience. The three videos are shown as part of a Swiss television show in front of a Satin covered bed surrounded by Smit’s paintings of Maxi Geil! and PlayColt. The often hilarious videos send up eighties prog rock and performance-based art with uniform glee and drip with sexual and artistic pathos. 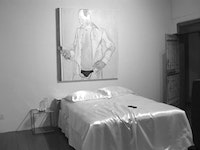 Deep existential questions like "Why are we here?" are answered with wit and empathy in Patrick Martinez’s show Liquid. The title isn’t an afterthought, but the theme of the conceptually analogous works. Martinez works successively, building a quietly stunning narrative starting with "Orange Wall" (2003). The partition facing the exterior of the gallery is painted neon orange that absolutely glows in direct light like the flash of an explosion.

"Where did he buy these?" was my first thought on seeing "Counterintelligence," Danny Goodwin’s live aerial feeds of the residences of George W. Bush and three members of his cabinet. In a row of four, just to the left of the door at Jack the Pelican, the small monitors screening the feeds are quite convincing.

Four quickly executed watercolors begin Joel Longenecker’s exhibition at N3 Project Space. Each relies on a lattice-work of blue, green, and earth tone brush strokes for structure. The resulting grid is wide open with plenty of gray ground showing through. The marks themselves are aggressive. They cut swiftly, threatening to break free of the grid holding them. The spontaneity of these small watercolors highlights Longenecker’s gestural style of painting and shows the artist at his best: intense and impatient. 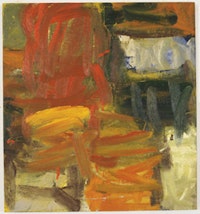 With the opening of Manuel Pardo’s Metaplasmic, the Van Brunt gallery inaugurated its second space, located on 819 Washington Street, near the meat-packing district. Originally from Beacon, Carl van Brunt and Rose Burlingham decided to expand their operations to Manhattan, featuring an entirely different roster of contemporary artists. 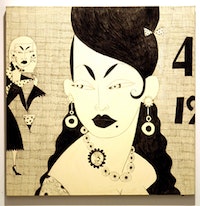 The current show at the Knoedler Gallery is a concise version of a larger exhibition at the Fogg Museum, Harvard: The collection of Lois Orswell, a patron of the arts who died in 1998 at 94. The collection as a whole was primarily amassed during two intense periods. From 1944-46, Orswell looked to Europe and purchased a superb collection of brightly colored, emotive pieces from the first half of the century, including works by Klee, Rodin, Cézanne, Moore, and Calder. The second phase of collecting took place during the 1950s when Orswell turned her attention to contemporary American sculptors and Abstract Expressionists. 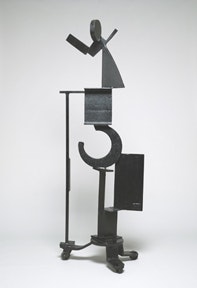 In his current show at the Peter Blum Gallery in Soho, Rudolf de Crignis presents two groups of works, one essentially blue and one essentially gray. For de Crignis, like Yves Klein, ultramarine blue is his primary vehicle, but unlike Klein he uses it with other colors. Series of gray paintings emerge from a dialogue of complementary colors. A modest brochure details what information you need in order to be able to see the work. Everything has been done with an eye to precision.

Wim Wenders: Pictures From the Surface of the Earth

Making his New York gallery debut with an exhibition of selected photographs from the Pictures From the Surface of the Earth series, famed filmmaker Wim Wenders reconfirms the fact that he is first and foremost a visual storyteller.