New York City and the Republicans 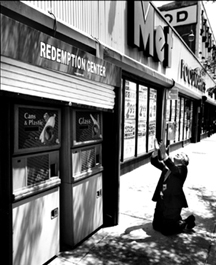 Is New York City a Republican city? To many that may seem like the silliest thing they’ve ever heard. But after three consecutive Republican administrations, and with a growing Latino population that is voting Republican (both Pataki and Bloomberg enjoyed a large percentage of the Latino vote in the last elections), could it be possible that the historic stronghold of progressive Democrats is slowly turning GOP? The New York State Republican Party has opened an office in Washington Heights. And, of course, the Republican National Convention is taking place in New York City, something that might have sounded quite ludicrous just five years ago.

In an attempt to develop the inchoate idea of an "urban Republican," the RNC will spotlight name brands like Giuliani and Schwarzenegger, conservatives that aren’t rabidly anti-choice or homophobic. The operative theory, one supposes, is to make the GOP seem more inclusive against the backdrop of the most diverse city on earth, thus trying to show the country, and right-leaning liberals, that Republicans can be successful in a place that’s not entirely white and Christian.

Off-stage is the reality of Republican power in NYC. The state of official Republican allegiance in New York is pathetic at best. Including the local, state and federal governments, the number of elected Republicans from the city is a mere 13. Only three of NYC’s 51 Council members, two of its 65 State Assembly members, four of the 25 State Senators whose districts are completely in the city, and one of the city’s 14 Congressional seats belong to Republicans. Not long ago, Mayor Bloomberg was, of course, a Democrat, and most of his top advisers still are. Even during the Giuliani years, when Rudy’s caustic bravado and Reaganomics spread the flimsy idea that a Republican agenda "saved" NYC, being a Republican was far from a prized label.

But even in a city that is almost organically biased towards progressivism, something is adrift. With unions decreasing in power and respectability, and the Democrats often mired in in-fighting and entrenched patronage problems, the continued growth of Republican leadership in a Democratic town is both bizarre and dismaying.

Republicanism in New York City has always been a cut apart from the GOP line found in most of America. One must share some sacrosanct socially liberal positions in order to be taken seriously by New Yorkers. Gun control, a woman’s right to choose, and gay rights are all integral to politics in the big city. That’s why the musty Conservative Party has had no success running its lonely archconservative candidates, folks who would fare much better in the Bible Belt. And that’s why the now-defunct Liberal Party (that, in the end, was anything but) had to support Republicans like Rudy Giuliani, giving him the slim margin needed for victory in exchange for a modest degree of influence.

As a result of this uniqueness, the GOP’s national leadership has always cast a suspicious eye on New York Republicans. During the Goldwater-era assault on liberalism in the mid-1960s, New York’s Republican governor Nelson Rockefeller was a progressive advocate of welfare and drug rehabilitation programs (Rocky, of course, changed gears with his reactionary drug laws in the early 1970s). At the same time, NYC’s Republican mayor John Lindsay implemented liberal inner-city programs and was able to calm potential racial unrest. Lindsay, a Republican, was, in fact, far more progressive than Ed Koch, a Democrat.

As the national GOP moved further and further to the right during the Reagan era, New Yorkers seemed ever more removed from the national Republican agenda. Nevertheless, during the Reagan-Bush years, there were more Republican city council seats in New York City than there are now. Even as the party’s ranks of elected officials have diminished (except for the mayor’s seat), the city has essentially moved to the right politically and economically over the past decade. And there is no real indication that this trend will reverse in any substantial way.

Rage Against the Machine


While the national Democrats became increasingly conservative during the Clinton era, on the local level, New York Democrats have fallen into disarray, largely owing to their problems of mismanagement, corruption and patronage.

Robert Fitch, author of The Assassination of New York and a professor of urban studies at La Guardia Community College, is characteristically blunt in his assessment of the state of progressive politics in the city. "New Yorkers don’t necessarily have party allegiance. It often comes down to who is less corrupt," says Fitch. He splits New York City politics into two camps: the Kleptocrats, who represent the Democratic Party machine and maintain outer borough strength through patronage organizations; and the Plutocrats, the mostly Republican group representing business as well as the city’s Finance, Real Estate and Insurance (FIRE) interests. Fitch sees a cycle in which the Democrats keep power until reform is needed because of scandals, corruption or hard economic times, at which point Republican plutocrats are then elected based on their promises of reform (usually in the form of economic austerity) amidst crisis, as well as law and order. The Plutocrats’ positions have been bolstered by highly conservative organizations like the Manhattan Institute, which was borne out of the fiscal crisis of the 1970s and gained particular influence over public policy under the Giuliani regime.

Previous Republican mayors like Fiorello LaGuardia were responsible for beefing up social programs and building vast amounts of affordable housing. According to Fitch, the reason this happened stemmed less from ideology than from pressure by the populist left-wing movements of the ’30s and ’40s, which were driven by strong union activity. Cohesive movements as well as populist union organizing have waned in the years since. In 1983, 32% of NYC’s workforce belonged to unions, whereas now the number is near 26%. Even more problematic is that unionization in the private sector has gone down from 24% in 1980 to around 15% today.

This situation is currently reinforced by Bloomberg’s ability to pay for his own election campaigns, creating the perception that he is not beholden to "special interests." While this image is largely a chimera—Bloomberg is clearly a frontman for the city’s FIRE economy—it nevertheless puts Democrats at a disadvantage. In next year’s mayor’s race, Bloomberg’s deep pockets will enable him to circumvent the city’s progressive public financing scheme, and thus allow him to fashion himself once again as a disinterested reformer.

"Bloomberg looks strong and is not going to take money illegally," says Fitch. "So we may have four terms of Republicans in a row in a city that’s 85% Democratic. It’s truly astounding. All you need is a bunch of money and highly paid consultants to push around the Democrats."


The fact still remains that along purely statistical lines Republican mayors in New York City are elected by registered Democrats who are, most likely, white and relatively well off. Remember that Mayor Giuliani’s open assaults on the First Amendment—trying to de-fund the Brooklyn Museum because he thought the art was offensive—turned a lot more white liberal New Yorkers against him than any of the revelations regarding his cutting people off welfare or pushing the police to stop and frisk minority youth.

Beyond the RNC and this fall’s national election, the local question remains: will a progressive leader emerge, one who will revive NYC’s liberal imagination and resurrect the city’s true democratic values? The national GOP is only holding its convention here because Bush and company want to be close to the backdrop of Ground Zero, in order to benefit from a popular spokesman named Rudy, whose two good weeks in front of the cameras after 9/11 made most people forget his eight divisive years as mayor. But when the bloviators in cowboy hats and red white and blue paraphernalia leave town, let’s hope that the remnants of a bridge over 8th Avenue will be the only things they leave behind.