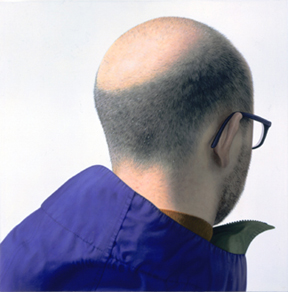 Karel Funk’s show of eleven untitled acrylic paintings at 303 Gallery is very much realistic portrait painting in the old school sense. There’s none of Kehinde Wiley’s stylization, none of fellow Canadian and 303-represented painter Tim Gardner’s apparent narrative. Funk’s paintings are solemn portraits of the heads (and only the heads) of twenty- and thirty-something men that, like fifteenth-century Netherlandish masters, really open themselves up to iconographic analyses. In Funk’s case, one man’s bland realism is another’s two cents on how products and brands undeniably inform personality, and maybe even define it.
The Gardner comparison is notable since each painter makes more or less hyper-realistic work that looks as if it may have been painted straight from a photo, and their shared subjects are youngish, hip-looking men. But while Gardner’s paintings feel like either a celebration or a condemnation of a frat-ish lifestyle, Funk’s portraits are engulfed in stony silence, his subjects resistant of much interpretation by virtue of their complete lack of emotion. Gardner’s kids are captured in an instance of spontaneity; Funk’s are just holding a pose.

All of Funk’s paintings emit an autumnal chill—most of his subject’s faces are buried in windbreakers, all rendered against a stark white background. They pose either in profile or with the back of their head facing the viewer. In the two instances where Funk’s men face front, their eyes are closed. Not once does Funk reveal both eyes of his subjects. There’s a real serenity about these paintings, partly because of their total lack of embellishment, partly because of the weirdly concentrated quietude of the subjects. The minimalist presentation really encourages a focus on the subject matter and Funk’s exceptional paint handling. Purple veins, little red pimples, stubble, contact lenses: they’re all rendered with a degree of realism that’s somewhat heroic.

All of Funk’s decisions—the placement of his subjects, their hidden eyes, the uniformity of young and generically attractive men—start to thwart a purely formal reading as you move through the show. It’s pretty clear that the way a product embellishes the sitter is very important. The right amount of curve to a visor, that perfectly unkempt greasy hair, those really big headphones—these are the real defining characteristics of these otherwise totally enigmatic men. One wears a trucker hat pulled down low, the visor obscuring his eyes: the person becomes less than the product, which acts as an advertisement for the person. Most of these men’s faces are at least partially removed from view by a hat or a windbreaker, implying a hiding of sorts, maybe a welcome homogenization dictated by a brand. One aging hipster reads like a how to remain cool manual for the over-thirty set. Handsomely bald and sporting black-rimmed glasses and manly stubble, this is a dude who’s aging gracefully—or at least knows how to make it look that way.

Ultimately, voyeuristic staring is just as inevitable as it is repelled: here these men are, modeling for you, but doing it so elusively that there is nothing to read. Safely hidden behind a generically hip hat or a Fountainhead Stretch Infusion jacket, it makes you wonder if there is any substance once you permeate all their style.