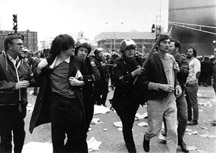 Howard Zinn arrested at a Vietnam War protest in the late 1960s. From Howard Zinn: You can’t be Neutral on a Moving Train. Courtesy of First Run Features.

Anyone who has seen the record-breaking political documentary Fahrenheit 9/11 knows that much of the rhetorical punch of the film comes from all the footage of W. & Co. that Michael Moore’s production team collected. From Bush’s look while reading My Pet Goat and his "now watch this drive" to Wolfowitz’s comb fetish and images from Iraq, archival and news footage is the stuff that directly shows some version of "reality," no matter how couched in context and edited it is. Hopefully, the damage that Fahrenheit 9/11 is causing the Bush administration doesn’t translate to a lockdown on the availability of these images. But it easily could. After all, it’s this array of footage, as much as the analysis, that’s changing minds. The New York Times quoted a Republican who came out of 9/11 over the opening weekend as saying that "All the offhand remarks they caught Bush making [showed] he wasn’t very presidential."


News archives, as private entities, are essentially beholden to the corporate lawyers of the huge media conglomerates who own them who can restrict the licensing of an image without any explanation. The parameters of the Fair Use doctrine and what makes up the public domain have been under assault for a number of years and while still very much of a gray area, filmmakers automatically (and technically) are under the threat of lawsuits when they use news footage. Most archives, for example, make the licensee indemnify the licensor on any number of details. Archives are an essential part of the historical record, and folks like Rick Prelinger prelinger.com have dedicated their lives to preserving footage that would have been chucked in the garbage or even buried on purpose. Filmmakers like Emile DeAntonio, Chris Marker, and Kevin Rafferty have relied on the ability to compile footage and thereby create a concentrated, and opinionated, historical text. It is essentially what provides the proof of a thesis. So, after Fahrenheit 9/11 spawns a slew of politically critical films chock-full of archival footage, any restriction or clampdown on the accessibility of footage should be viewed, at the very least, as not only censorship but also as a restriction on the very representation of history.

PBS’s Wide Angle
(Thursdays at 9 PM on WNET)
Wide Angle is one of the few true documentary series on public television these days that deals with true international political issues and brings in hour-length footage from around the world. The third season began on July 1st with Suicide Bombers (see review on the Rail’s website: www.brooklynrail.org) and continues with The Russian Newspaper Murders, which tells the story of the more than 100 journalists who have been murdered in Russia since the late 1980s. Later shows include The Saudi Question, which looks at the challenges of what’s happening inside the kingdom these days, and Dying to Get Out, which investigates the worldwide boom in illicit migration and human trafficking.

Howard Zinn: You Can’t Be Neutral on a Moving Train
(opens on July 23rd at Cinema Village)

Zinn makes a cameo in The Corporation. But here you can see the full story of the author of A People’s History of the United States, the influential book that’s sold over a million copies. With a full scouring for archival footage of Zinn in the old days, the film also includes Daniel Ellsberg, Tom Hayden, and the other Corporation interviewee (and close friend) Noam Chomsky. Matt Damon took some time off from the Bourne series to narrate.

America’s Heart and Soul
(released over the July 4th weekend)

Of course, maybe you want to see the "other side" of critical films like 9/11 or The Corporation. If so, you can always go to Disney’s "celebration" of America, an antiseptic diorama film that weaves simple and positive vignettes of everyday Americans with expensively produced shots of American landscapes and hyper-Copeland-like upbeat music. While the Big D swears it’s not a political statement, they invited the new Moore-bashing group Move America Forward to a Washington, D.C., screening. Guess what? They loved it!