A Boom Grows in Brooklyn 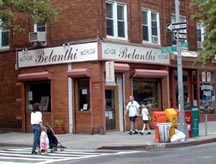 Belanthi Gallery on Court Street. All photos by James Kalm.

Word up Williamsburg: there’s another artsy neighborhood gaining attention in Brooklyn. A whole section of South Brooklyn (just south of Downtown) has finally achieved the distinction of its own art world moniker, "Smith-Lantic," dubbed as such by artnet reviewer Stephen Maine. The area hasn’t seen this kind of attention since H.P. Lovecraft wrote "…with dirty highways climbing the hill from the warves to that higher ground where decayed lengths of Clinton and Court Streets lead off towards Borough Hall" in The Horror at Red Hook. Now I may not be the fastest on the draw with snazzy names, but having lived in the neighborhood for well over twenty years I’ll attempt to make up for it with some back story and local history. 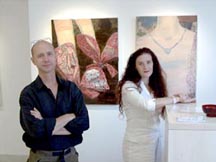 The area under discussion is actually the epicenter of several neighborhoods, each with it’s own unique artistic presence and players. Half a mile away is Brooklyn Heights and the venerable Rotunda Gallery, so named because it was originally housed in Borough Hall’s main rotunda. Down Court Street in Cobble Hill is the Belanthi Gallery, operated by Paulette Hios and open to the public for over twenty-seven years. A neighborhood institution, this space features painting, sculpture, and graphics, as well as music recitals, performance, and poetry readings.


If one wishes to face the "horror," Van Brunt Street in Red Hook has longtime resident Kentler International Drawing Space, a small gallery that has displayed many local, national, and international artists. A more recent addition, Diesel Gallery, is a space affiliated with the Ridge Street Gallery, and directed by Stuart Nicholson. Diesel presents an eclectic mix of independently curated shows as well as grassroot productions by local artists. This neighborhood has also traditionally presented the Brooklyn Waterfront Artist Coalition show. This massive production is worth visiting just to see the interiors of the Beard Street Civil War-era warehouses on the piers, where over the last fifteen years hundreds of local and regional artists have displayed their works. 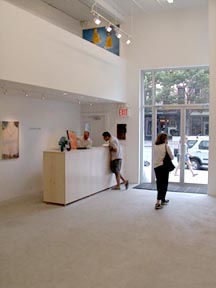 The bottom of Smith Street peters out at the Gowanus Canal; we head north and enter Caroll Gardens. The www.gallerythe.org is a unique combination of virtual Internet gallery and street-level display window exhibition space. Located on the corner of Smith and Caroll Streets, www.gallerythe.org has been in operation since spring 2001. Resident curators Koan-Jeff Baysa, Michael Fabian, and Valerie Kelemen have a taste that veers towards sci-fi and techno formalism, but they encourage proposals from independent curators and artists. Past exhibitions have included Paint with Lori Ortiz and Gilbert Hsiao, Dark Science with Stephen Oliver, Bill Byrne, and Fred Flisher, and Threads with Pedro Elias Cruz-Castro, Kay Gordon, and Sally Gill.


A few doors north is the David Allen Gallery. Featuring the furnishings and furniture of Herman Miller as well as other classic modern designers like Alvar Aalto, Charles and Ray Eames, and Ishamu Noguchi, David Allen also shows some of Brooklyn’s most energetic artists in a homelike presentation rather than a "white box" setting. Tattfoo Tan was displaying selections from Secret Garden during a recent visit. These sparse and elegant paintings, mostly monochromatic grounds with colorful linear clusters, seem a perfect foil to the sleek household fixtures. Other artists exhibited include the works of our neighborhood’s own "advocates of Minimalism," Rossana Martinez and husband Matthew Deleget, as well as expressionist Jennifer Ross. 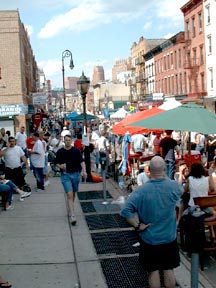 Smith Street rocks during its own food and music festival.

Staying on Smith Street, but closer to the Atlantic Avenue intersection, is what the New York Times has called "a high-tech funhouse," the MicroMuseum. This storefront space specializes in the conjunction of art and technology, combining performance, dance, and music with solar-powered cyber art and video. Founded in 1986 by William and Kathleen Laziza, the MicroMuseum functions as a laboratory for the wickedly inventive collaborations of the Lazizas. This venue has rightly achieved worldwide recognition for its progressive research and work in advanced medias, as well as for their outreach to the community as a whole. They also produce an independent TV program, "Spontaneous Combustion," which features new artists and is broadcast monthly on Brooklyn Community Access Television.


Continuing east to 372 Atlantic Avenue is the Bruno Marina Gallery. This is the brainchild of Rico Espinet, an artist and RISD grad who began business in the neighborhood with his design studio "Rico." In conversation I asked Espinet why Atlantic Avenue and not Soho or Williamsburg? "This is the epicenter of Brownstone Brooklyn. There is unprecedented development that rivals the last great phase of growth a century ago before Brooklyn became a part of New York City. Williamsburg is just ‘too cool’ for me, too much like the East Village. I want to work with art and artists that are sustained, developed, and understand quality and craft. I’d like to have a mixed program, something that doesn’t just focus on young artists." There’s also mention of liking the fact that he’s "set apart" and feeling like a pioneer in this locality. Some of the artists in the summer group show include: Joe Fyfe, with a pair of subtly simplified abstractions on burlap; monochrome encaustics by Karen Revis; plastic sculptures by Lisa Beck; photographs by Ernesto Pujol, Eric Weeks, and Polly Apfelbaum; portraitist Peter Seidler; and Working in Brooklyn alumni Marisa Telleria, Susan Rabinowitz, John Berens, and Carolanna Parlato. 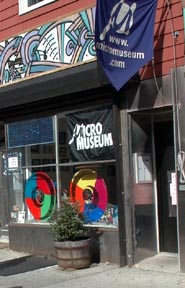 As the environs of the Smith-Lantic district have grown, DUMBO, that once vital venue has shrunk. Metaphor Contemporary Art at 382 Atlantic is a refugee from DUMBO. Julian Jackson and Rene Lynch operated the gallery in their loft there for three years and spent four months preparing the Atlantic space for their "Grand Re-opening." With 17-foot ceilings and a mezzanine gallery accessible by spiral staircase, the debut show by Chuck Yuen showed off both the airy space of the gallery and Chuck’s painterly, figurative allegories to mutual advantage. Jackson has a positive view of the new developments. "Rene and I are both painters, but during the nineties people weren’t showing that much painting. That’s why we decided to focus on it. Because we’re living and working in the same region, seeing the development, like the renovation of the Brooklyn Museum, we’d like to see this become a walking destination. We like the energy of this part of town, not only its artistic energy but its entrepreneurial energy, too. Brooklyn is like a collection of small towns. This area with its shops and richness of life reminds us of old Soho. The G train connects us with Williamsburg so we aren’t that far from other art communities. We’ve been getting over 150 people in over the weekends, and probably a lot of them don’t go to galleries. We feel like we’re ambassadors for art here."


You can never tell how things like this new confabulation will work out. People will continue trying to make art, galleries will go on trying to show art, and the ebb and flow of our little cultural estuary will continue. To quote Thomas Nozkowski when asked what young artists should do to make it in the art world, he said simply "survive." Brooklyn, as always, will survive.