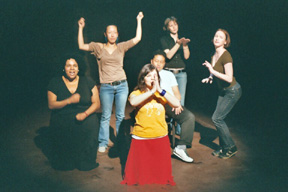 Photo of the Neo-Futurists by Greg Allen.

I was 16 and living with my 90-year-old Grampa in the Rogers Park area of Chicago, and my weekend curfew was set at midnight. Just to keep my nose extra clean, I’d come home at about 10; pretend to turn in when he did at about 10:30; and then sneak out our creaking basement door to hook back up with my friends by 11, giving us just enough time to hit one of our favorite late-night hangs, the Neo-Futurarium, by 11:30.


At the Neo-Futurist’s, my ritual ticked smoothly on: lighting up a Camel Light, I’d dig out my lunch-money-and-bus-fare-only wallet and shake the six-sided die they gave me, praying to the God I didn’t believe in that it’d tumble down on 1, so I’d only have to shell out a buck to get in. But even if the die turned up six, I’d gladly pay that much admission. I knew instant gratification would soon be on its way with the 30 plays in 60 minutes that comprise Greg Allen’s Too Much Light Makes The Baby Go Blind.

I still maintain that it was worth going without lunch for a few days. As a gay misfit in a Jesuit high school, what I was really hungry for was smart dissent—and I’d already gone down way too many blind alleys in search of that. With the Neo-Futurists, my search was largely over.

That was in 1990. Just like The Onion up in Madison, Wisconsin, the Neo-Futurists weren’t the least bit afraid to hold a hard and hilarious mirror up to times that were rife with subtle racisms, wholesale homophobia, unsustainable class structures, and smug leaders cutting dirty deals under the awning of American democracy. The Neo-Futurists kept pace with the latest in politics and on the streets by writing new skits each week. Their motto: "If you’ve seen us once, you’ve seen us once!" It was at the Neo-Futurists that I first saw an actor breeze on to stage stark naked and deliver a full-length monologue. It was at the Neo-Futurists that I first heard "homophobia is a social disease," which emboldened me to come out at 17 despite continuing opposition from family and society. Here was an ensemble that made it their mission to change faster than the times themselves.

Yet it’s true that the more things change, the more they stay the same. In 1990, we heard heroes like Public Enemy busting out white power wherever it hid to a mainstream audience. In 2004, Condelezza Rice abnegates affirmative action and is herself dubbed a hero for vociferously lying under oath to defend Dubya’s murderous ploys while Colin Powell nods assent in the wings. In 1990, there was a Bush in office, waging a senseless war in Iraq and smirking off any and all public outcry against it. Now another Bush is in office, doing the same damn thing. In 1990, Queer Nation was popularly dismissed as the lunatic fringe for even proposing something as preposterous as gay marriage. Last year, the Supreme Court itself overturned sodomy laws, gay marriage will be a major bone of contention in this year’s election, and the oval office is redoubling its efforts to impose a federal ban before the winds of change come to blow its rickety platform clean off the map.

Since 1990, some other things have and have not changed. Though thirty now and a writer in New York, I still spend my lunch money on theater and smart dissent. Once just a Midwest college rag, The Onion has become the nation’s favorite lampoon, headquartered in Manhattan. After fifteen years of sold-out performances in Chicago, the Neo-Futurists have now opened a branch just blocks away from me in Park Slope, but they have not lost a sliver of their original Chicago edge. They still hand you dice at the box office—though, to make their New York rent, they now tack on $9 to whatever you roll. It’s still worth every penny.

The show follows its original format. They do 30 plays in 60 minutes—or however many they can cover before the hour-timer on stage goes off. They ask you your name at the door and write you a freaky new one on a nametag. They list their thirty plays for the night on a playbill and have each title hung up on a clothesline. Audience members shout out which two-minute play they want to see next, at which point a cast member will race up to grab it off the clothesline, announce the title, ball up the paper, and chuck it at the audience. Each play abruptly ends when a timekeeper yells, "Curtain!" As part of their TMLMBGB "de-virginizing," total-immersion experience, the cast members often take the show into the audience and hang out with them when they’re not on stage.

TMLMBGB is shot through with Gen X/Gen Y satire that is both cynical and socially conscious, albeit not always overtly political. The night I went, the TMLMBGB cast called two presumably heterosexual female audience members down to the stage, hauled out a bottle of wine, and sat them down to their first date, coaching them all the while on what to say next and how to turn each other on. The two chicks had to sit there together for the rest of the show. They hosted a musical-chairs game, crowned the winner king, carried him like a retinue to his corner, and then informed him that his being a winner had just made him a pariah of his peers; he sat there all alone for the rest of the show. In another piece, a cast member from Wisconsin relived his teenage past by shotgunning Budweiser with two volunteers from the audience. Other skits were more political; of particular note was the poignant tragic-relief scene, in which a young woman mournfully swathed the floor with news reports, announcing the death toll for American soldiers in Iraq: 689 and growing by the second week of April.

TMLMBGB is a Chicago institution, fast on its way to becoming one in New York. In the mid-’90s, its Chicago cast held a Manhattan run for two years, but one of the cast members, Greg Kotis, wrote the Tony-sweeper Urinetown and TMLMBGB bowed out of New York gracefully, incubating in the Midwest for its east coast comeback. And finally, it’s here! Having read the news today, I can’t think of a better time for it.

Smith is Editor-in-Chief of Sentient City: The Art of Urban Dharma.