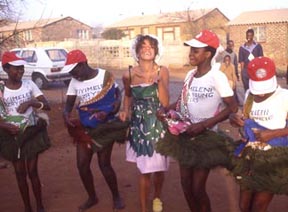 Bands like 8-Eyed Spy, Mars, Theoretical Girls, and the Contortions conjure a New York filmed in Super-8: grainy, gritty, smudged, raw, exuberant, naive. For those of us who know that time and place only through rumor and hearsay, through leftovers and reissues, the East Village underground scene of the late seventies looks like a Shangri-La—a vanished utopia in which enough good ideas for an entire decade were crammed into a few short years. With the death from cancer on April 20 of singer Lizzy Mercier Descloux, one of that world’s most category-defying denizens, it recedes further into the mist.


It’s little wonder that the No Wave revival, starting five or six years ago, has enjoyed an unusually long shelf-life. At its best, the scene was as innovative as free jazz was in the sixties, and as stubbornly resistant to staleness—probably because it relied so heavily on mining the ambiguous territory between extremes. Where punk steamrollered straight ahead, No Wave careened like a pinball, terrifying one minute, slap-happy the next. On the seminal downtown label Ze Records (home to Kid Creole and the Coconuts, the Contortions, and Lydia Lunch), Lizzy released two remarkable albums: Press Color and Mambo Nassau.

Along with her close friends Patti Smith (who illustrated a book of Lizzy’s poems, Desiderata) and Richard Hell, Lizzy, with her tumbleweed hair and laser-intense gaze, came closer than anyone else to channeling the spirit of that patron saint of provocateurs, Arthur Rimbaud. If Patti was the imagined lover of a reincarnated Rimbaud, Lizzy was his bratty kid sister. (They even looked alike.) She too would be drawn to Africa, which would deeply influence her as a musician, artist, and person. She’d be a pioneering force in World Music years before that term was coined, employing the talents of musicians like Wally Badarou; she’d appear in Amos Poe’s Blank Generation; she’d collaborate with Chet Baker.

Lizzy Mercier Descloux was born in Lyons, France. She spent some time at the École des Beaux Arts, but left to travel to New York in 1975 as a correspondent for the French magazine Rock News (founded by then-boyfriend Michel Esteban, who would later go on to co-found the Ze label). She moved to New York the following year, recording a six-song self-titled EP under the name Rosa Yemen. Press Color followed in 1979.

One of the most sublimely eccentric pop albums ever made, Press Color sounds like nothing before or since. The slippery spy-vs.-spy noodlings of "Wawa" and the clench-jawed funk of Lizzy’s (now-legendary) cover of Lalo Schifrin’s Mission: Impossible theme are deliciously sneaky and shifty-eyed. "Jim on the Move" smushes chunky beats with screeky guitar and a vocal approach that borrows from avant-garde sound poetics: Her guttural yelps and glides harken back to dadaists Kurt Schwitters and Raoul Hausmann (though she wasn’t the only one using the human voice this way—Kleenex, Lora Logic, Patti Smith, and others had also been exploring the possibilities of voice-as-instrument). But Press Color wasn’t about self-indulgent experimentalism; its crunky cover of Arthur Brown’s "Fire" was even a dance-floor hit uptown at 54.

Mambo Nassau, recorded in the Bahamas in 1980, undercut the punk dissonance of Lizzy’s previous LP with West African highlife sounds. Produced by Steve Stanley (who would also work with Grace Jones, the Tom Tom Club, and Third World) and employing the talents of Wally Badarou (Herbie Hancock, Level 42, Black Uhuru) as well as No Wave founding father Arto Lindsay, the LP is slicker production-wise but retains her signature blend of odd instrumentation, discordant vocals, and goofy-clever song titles like "Sports Spootnicks" and "Milk Sheik." Lizzy would have a huge hit in France in 1983 with her single "Mais ou Sont Passées les Gazelles?" recorded in South Africa, and the album of the same name, released this time on CBS. But her next album, the 1985 One for the Soul, wouldn’t fare as well. Suspense, released in 1988, would be her last release; she’d eventually settle in Corsica to concentrate on painting.

Lizzy Mercier Descloux was a remarkably unique voice in a time overrun with unique voices. Even now her contribution frequently goes unrecognized; it’s more likely to be James Chance or Liquid Liquid or ESG or Teenage Jesus and the Jerks pointed to as embodiments of that sound, its ideas and anarchic glee. It’s true that, as much as Lizzy was a part of that, she transcended it. No mere downtown nihilist, her humor and honesty and fearlessness are what linger, years later. She left a mark that, while small enough, is indelible.

1962–1964 manages to encapsulate the artistic explosion taking place in New York in the early sixties in art, in dance, and in poetry.

“EXHIBITING THE CITY” reads one heading, and indeed this extraordinary exhibition includes, at its beginning, a few works from key exhibitions in New York in 1962 and 1963, feeling remarkably full.

A historical exhibition aims to show us past life, but sometimes the retrospective becomes reflective, a two-way mirror seeing through to the present. So it is with New York 1962–1964 at The Jewish Museum, certainly at the moment our fair city’s most enveloping visual and aural museum experience.