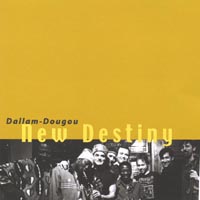 In 2003, Raul Rothblatt, a Brooklyn-based composer active in musical theater, Hungarian folk, and world music, made a pilgrimage to see the Sosso Bala, an eight-hundred-year-old xylophone that once belonged to Sundiata, the greatest emperor in West African history. Part musician, part cultural ambassador, Rothblatt, along with Guinean Abou Sylla and five other Westerners, traveled to eastern Guinea, not far from Mali, to pay homage to this holy grail of a xylophone.


The result was the formation of the band Dallam-Dougou: dallam meaning "melody" in Hungarian, and dougou meaning "land" in numerous West African languages. With wit and vibrancy and the occasional tumult, Rothblatt, the group’s founder and primary composer, has brought the entirety of his classical, jazz, and Hungarian training to the chronicle, demonstrating how music can bring solidarity to people from vastly different cultures. The nine tracks on the group’s debut release explore genres ranging from a Moroccan/Susu invitation to party ("Oy Yoy Yoy") to a Gypsy/Turkish/West African dance tune ("Mahala a la Mandingo"), to Bach’s Cello Suite #1, recast with the addition of a West African flute. Rothblatt’s melodies are buttery and rhythmic. The sense of the live performance remains paramount in all of Rothblatt’s recordings, and listeners will revel in his soufflés of musical experience. The title track, "New Destiny," features the highly regarded vocalist Malian Abdoulaye Diabate, who, in traditional manner—exquisite yet pounding—recounts and improvises upon the experience of a Western band of musicians in Africa.

Throughout, Rothblatt pays homage to the West African master musicians known as Griot. (Diabate and Sylla are both Griots.) Much like Europe’s Goliards, Griots are musicians, poets, and historians of the Mande peoples, who extend from Senegal to Niger. For eight centuries in the town of Niagassola, the Kouyate family—Griots descending from the personal praise-singer of emperor Sundiata—have preserved and performed on the venerable Sossa Bala xylophone. (A portion of the proceeds of New Destiny go to the Kouyate family and to Niagassola, which has only three water pumps for several hundred people.)

Jumbie Records, which produced and launched New Destiny, was founded by Rothblatt along with composers David Rogers and Mark Stone. The label is dedicated to creative new music based in world traditions, and to the power of music as a global force for positive change. "World music used to be only about distinct local traditions," says Rogers, "but today it is evolving into a musical melting pot. Jumbie Records is committed to supporting musicians who are innovating and combining the world’s musical traditions in meaningful new ways."

Rothblatt, who himself plays instruments as varied as the cello, bass, Javanese gender (a type of xylophone), Transylvanian utogardon (percussive cello), and African nenyeru (one-stringed fiddle), adds, "I have these guys from very different backgrounds, and there’s a lot of conflict. It’s not utopia right off, but the freeness, the looseness that we need to bring to the whole shebang is what makes for good music. You can hear it."

John Reed's novels include A Still Small Voice (Delacorte 2000) and Snowball's Chance, which will be published by Roof Books this September. He lives in Manhattan.

After her father is killed in an anti-Semitic pogrom, an 8-year-old girl emigrates with her mother from the Ukraine to New York City. It’s only long after, at the age of 45, that she begins to paint, using, among other materials and tools, enamel paint and glass pipettes from her husband’s costume jewelry business. Working with these unconventional means she develops a novel method of painting that involves dispersing fluid drips and pours of paint across the entire canvas. Her studio is a few square feet on the parquet floor of the Brighton Beach apartment she shares with her husband and son. Thanks in large part to the actions of her son, her work attracts the attention of several avant-garde refugees from Europe (two of whom pay visits to her in Brooklyn) and other people interested in “primitive” art.