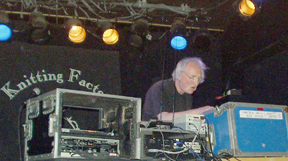 Photo of Holger Czukay at the Knitting Factory on 5/8/04 by Roger White.

Holger Czukay ended his recent concert at the Knitting Factory with a very unexpected cover: the Chinese Cultural Revolution anthem "The East Is Red." In Czukay’s version, the sampled brass section of the song was forcibly reorganized around some jittery electronic beats and augmented by violent bursts of radio static and Czukay’s enthusiastic French horn playing. The piece, originally recorded in 1984 as "Der Osten Ist Rot," was a cheerful riot of a song, and showed off the productive clash of experimentalism and pop sensibility that has been the hallmark of Czukay’s four-decade musical career.


The most aesthetically mischievous of avant-garde composer Karlheinz Stockhausen’s students, Czukay in 1968 co-founded the group Can in Cologne, Germany along with a classical music conductor, a jazz drummer, and a young student of his own. With the addition of idiosyncratic vocalists Malcolm Mooney and, later, Damo Suzuki, Can gave a convincing impression of having absolutely no musical predecessors. The sounds they produced were either accessible experimental music or very strange rock and roll, depending on how you look at things. As the group evolved, Czukay relinquished his bass guitar and acted as a sound engineer, incorporating tape loops, short-wave radio, and ambient noise into Can’s complex sound.

At 66, Czukay is both a steward of the Can legacy and a restless, prolific solo artist. His list of musical collaborators includes Japan’s David Sylvian, bassist Jah Wobble, Brian Eno, and more recently Dr. Walker of the Frankfurt duo Air Liquide. Czukay’s embrace of electronic dance music in the late nineties has resulted in a fruitful trans-generational dialogue in his work, as he discovered much younger musicians sharing his love for rhythmic noise and the misuse of electronic instruments. I spoke with him before the Knitting Factory show.

Are your concerts similar to one another? Is there a program?

No, it is always a different thing. At the moment I will play the same program as I have in Baltimore, but live it is always different.

It seems that surprise is a key idea for you—having something in the music like short-wave radio, for example, that you work against. Now that there are so many different options for finding and editing sounds, is it more confusing or more beneficial?

I never follow this way of thinking: "If I have more options." It is not the amount of options which is important, it is that something is unpredictable, that something happens to you which you probably don’t expect. And every concert has had that. There is always a mistake, always somewhere a problem with the equipment, and you always have to be spontaneous in everything that you do. The unpredictable thing with the short-wave radio is that it is actually a synthesizer, but one which you can’t program. You have to search and play a little, and you have to be lucky.

You have said in interviews that with Can, the problems of the band started when you began using multitrack recording. Why?

When we started recording it was only on two tracks, straight onto stereo, and, you can say, right onto vinyl. We learned how to play as a group. Then when the multitrack machine came, we were playing the tapes back and correcting our mistakes as individuals. It didn’t take a long time until, for example, I recorded Can and found that special moments in the recording were quite good and others not. So I said, we take this little window and work that window out. And suddenly we had something which we couldn’t play live. The record company would come and say, "Can we hear something?" and we would say, "No, you can’t hear it." It was not a musical recording anymore, it became a data track. Though it was still an analog tape, we ourselves behaved digitally.

But it seems like your work now is more like that, more of an assembly than a recording in real time.

No no, that is not true. I still record live. For example, once I bought an old sampler. I didn’t know how to handle that thing. But I did know one thing: Whatever I start and try to test out I will make a ceremony out of it and record everything. This is what I have done and it is a piece called "Mirage" on Good Morning Story. I myself was surprised; I didn’t know anything about the sampler. But I knew how to direct and conduct the whole thing so I didn’t lose any of the music I had just recorded. These are the most magical types of recordings. If I had never recorded anything else with the sampler it would have paid off only for that one piece.

When Can started, you played shows in art galleries and other unusual places for live music. Who was your audience at that time?

When we had finished Canaxis [Czukay’s first record, made with Rölf Dammers] and Monster Movie [Can’s first LP], it happened that we were invited in 1969 by the State Theater in Zurich, Switzerland, to make a kind of theater show, as you call it, theater music, for three months. We said to the director that we will do this only if we are allowed after the theater show to hold a free concert every night for the audiences. At the beginning the people came in and they didn’t know what to expect. Later it happened that people would be standing outside of the theater, waiting for the theater show to be over so they could go to the free concert!

Every biography of you mentions your study with Stockhausen. Was it surprising to people that you decided to leave the serious music world, and to make pop music?

It wasn’t surprising to people because people didn’t know us. We were no-names, nobodies. Irmin [Schmidt, Can keyboardist] was a real conductor, and with him you could expect that people were surprised. But the only people that knew me were my pupils, and they brought me to this! They asked me if I wouldn’t like to play in their school band. And we played one time in the school festival together and I loved it so much. They were teaching me about music, actually, at this time, and I thought maybe there is a way to make this into a profession. And then it suddenly happened that I knew Miki [guitarist Caroli] and I asked Irmin to do something together. And that was the ignition, we were just there. It didn’t happen that we searched for one another, we found each other immediately.

Do you think musicians should study?

What should be studied is the human factor. It is not so much the skills, which one comes by alone. I would never say, "Put your fingers like this and like this." That means, no classical training at all. It is more developing your own personality, becoming someone. A strong personality.

You once said that you considered all your music to be church music. Am I understanding that correctly?

Yes. You are completely right. As a young child after the war, the only real music was in the church. It was the only place I could hear some music, and this affected me a lot. You must understand that at that time we became refugees. Have you ever heard of the Wilhelm Gustloff? At the end of the war the Nazis had a huge ship—it was almost as big as the Titanic. We were booked on this ship, we had tickets, to leave Gdansk. The ship was shot by Russian torpedoes and sank with ten thousand people. My grandmother said, "The water won’t carry us, we have to find another way to get out of Gdansk." You can understand when we heard that the ship had sunk, this is the recipe to make an unbeliever a believer.

I really firmly believe someone is conducting me. I am a medium, nothing else. Stockhausen said if in his process he could explain everything he was doing, then he would have big doubts that he was going the right way. And I said "Do you mean this really seriously, Mr. Stockhausen?" And he said, "Yes I mean it very seriously." And then I learned that he was Catholic. I am thinking somehow like him. But in a different way.