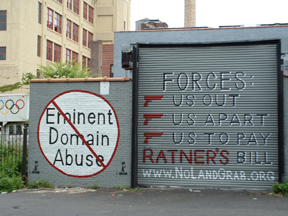 A mural on Carlton Avenue between Dean and Pacific Streets in the residential area that would be eliminated by the proposed arena. Photo by Brian J. Carreira.

The still comfortable New Jersey Nets lost Game 7 of the NBA Eastern Conference Semifinals to the Detroit Pistons. Over the last month or so, this has been one of the few pieces of news relating to the Atlantic Yards—the proposed block-busting mega-development that would include the Nets’ new home—that hasn’t been subject to some sort of gag order or secrecy agreement.

Bruce Ratner still has big plans for Prospect Heights. He would just prefer that you didn’t discuss them. A few lucky area residents, however, were privy to an alternative siting plan for the development, which would purportedly avoid much of the proposed demolition of existing structures, at the apparent expense of livability in these very same buildings. But Ratner prefers silence and he has the power to litigate, especially if you live at 636 Pacific Street and were willing to sell your property to him.

The revised proposal, trotted out recently with hollow, pre-recorded fanfare, was touted as a major concession to arena opponents. Forest City Ratner would still build the arena and the high rises, but the plans were re-worked so that area homes and businesses would be spared in the process. The details were spotty, and despite a flash flood of PR, there seemed to be little support from affected residents and the revised proposal quickly scurried back into the hole from whence it came.

More recently, all but one resident of 636 Pacific Street, a converted warehouse, allegedly agreed to sell their condo units to Ratner for amounts that in some cases greatly exceeded their current market value. This generosity came at a price. As part of the sales agreement, sellers are under a lifetime gag order under which they cannot discuss the terms of the sale. In addition, they reportedly are forbidden from donating to any groups that oppose Forest City’s Atlantic Yards vision; are required to remove any signs or banners that criticize the proposal from their windows; and must respond to any press inquiries from a script. Despite all of the secrecy, the fact that one unit sold for $1.3 million seems to have found its way into numerous articles reporting on the deal.

“I think it is Exhibit A of eminent domain abuse,” insists Patti Hagan of the Prospect Heights Action Coalition. “The people who are being forced to sell to him don’t want to leave,” she says, “they just moved in.”

The consensus amongst many in Prospect Heights is that the developer left residents at 636 Pacific little choice. They could take the money and run now, or risk the possibility that Empire State Development Corporation would condemn their building as “blighted” using eminent domain guidelines. City Councilwoman Letitia James agrees that the condo owners had a dilemma. “Some people have taken the buyouts,” she says, “but they have guns to their heads.”

Patti Hagan also points out that thus far, Ratner has not made similar offers to the smaller landowners on Dean and Pacific Streets, some of whom have been in the community for decades. As far as renters go, she believes Forest City “has no consideration for the tenants,” concluding that Ratner “doesn’t give a damn.”

So where, really, do things stand with the project? According to John McCarthy, a spokesman for the MTA, there are still no official proposals being brought to the MTA’s attention on the upcoming schedule. Which makes the 636 Pacific sellout in some ways look like a cart pulling a horse. On the other hand, perhaps it was meant more as a blow by the Ratner team to those who oppose his vision. If this is the case, Councilwoman James dismisses the effect. Opposition to the project, she says, is “growing,” and it will “continue to grow.”

James also explains that the issues of eminent domain use and abuse aren’t the only reasons members of the community are opposed to this proposal. “It is about having an open dialogue and the massive scale of the project,” she says. James is involved with the Atlantic Yards Development Workshop, a group formed to encourage this very dialogue. “My priority is not basketball,” the councilwoman notes. Instead, she advocates community planning of the site that would focus on issues such as housing, jobs, and education. James maintains that “developers should be put on notice that this is not the way to develop public parcels of land.”

Norman Siegel, who represents Develop Don’t Destroy Brooklyn (but does not represent the individual homeowners affected by the plan) also takes issue with the manner in which this development is taking place. “The process is upside-down,” he says of Forest City Ratner’s approach to the Atlantic Yards site. “The members of the community,” Siegel says, “should be meeting with the developers to put forward a future for Brooklyn.”

Siegel is bothered by the murkiness and secrecy surrounding the 636 Pacific agreements. “As the former head of the New York Civil Liberties Union, I am particularly offended by it.” Specifically, the gag order is “antithetical to the principles of free expression.” Siegel is currently trying to figure out if there is anything that can be done about these “very troubling” agreements, since they are between private landholders and a private company and therefore not subject to the First Amendment.

There are also some very real environmental concerns to be addressed. Fort Greene and Prospect Heights already have some of the city’s highest rates of juvenile asthma and other respiratory ailments. Such problems would only be exacerbated by the automobile traffic generated by adding a 20,000-seat arena, 2.5 million square feet of retail and office space, and 4,500 new residences to an already dense area. Thus far, no environmental impact studies have been presented to the community by Forest City or the state. And the MTA will only be required to do such a study once a formal proposal is made.

One obstacle currently blocking clear expression of community sentiment regarding the proposed development is that the site is currently situated over three community boards: 2, 6, and 8. Both Community Board 2 and Community Board 8 have each made motions to alter their boundaries to encompass the entire proposed development. These motions are subject to review by Mayor Bloomberg, who can then submit his recommendation to the City Council. The Mayor is under no obligation to do this, however. Despite the fact that it might benefit the community to have such a major proposal under the jurisdiction of one board, both in terms of feedback and communication, it is unlikely this will occur. With New York recently advancing to the final round of candidates for the 2012 Summer Olympics, there is every incentive for City Hall to keep its many proposals for new sports structures moving forward.

Through various back roads and shadowy detours, the Atlantic Yards proposal keeps advancing. Forest City Ratner has received nods from Borough President Marty Markowitz and the Mayor’s office. Ratner, in fact, has acquired one building that would be demolished in the plan’s footprint without so much as a shot being fired. Forest City has done little in the way of engaging in real dialogue with the community. Negotiations are hidden behind veils and protective agreements. Joyce Baumgarten of Geto and DeMilly, Forest City’s public relations arm, was unable to discuss the rationale behind the gag order or provide any more detail as to the developer’s future timetable.

Although Ratner has claimed to be making an effort to involve the community, thus far the details of this massive project have been released to the public on a “need-to-know basis.” But in spite of the effect the project would have on those who currently live in Prospect Heights, in Ratner’s mind, they don’t need to know too many details. With a 12.2 percent office vacancy rate in Manhattan during the first quarter of 2004, and the local opposition being vocal and persistent, one would imagine that a developer seeking to portray himself as “sensitive” to the needs of the neighborhoods where he builds would want to do a better job of justifying the need for his arena-office-condo project.

Instead, over the last few months, Bruce Ratner has engaged in a pattern of near-silent wheeling and dealing, interspersed with brief volleys of fine-tuned announcements regarding his designs on Prospect Heights. Direct communication with the community has been limited to a small number of Community Board presentations and private meetings with select homeowners. In its current outline, the Atlantic Yards project promises to irrevocably transform several neighborhoods, yet the exact details still remain cloudy. The people of Prospect Heights, Fort Greene, and Park Slope should demand better and clearer answers from Ratner and company. If Ratner cannot solve the many problems his proposal would create, the community should demand that he develop elsewhere.

Baltimore-based painter Jo Smail speaks with Louis Block on the occasion of her retrospective at the Baltimore Museum of Art, reflecting on her career in South Africa and the US, recovering from a stroke, painting emptiness, and the influence of Clarice Lispector.

At Home and in the Crowd

Audience members wait in the entrance of the townhouse (now run as cultural space by the nonprofit 1014) before filing in to a back room. Hassabi’s FIGURES (2019) unfolds. “51, 52,” a projected voice counts as four dancers move subtly between twisted sculptural poses. The harsh fluorescent light overhead cancels what warm tones would have been offered by the ornate, wood molding.