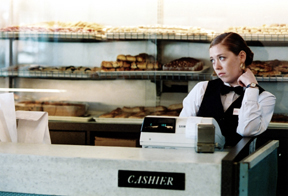 Sometimes the biggest issues can only be dealt with in the smallest stories. When Nelson George set out nearly five years ago to make "a film about race in America" for HBO, he solicited public input. Of the 2,000 or so proposals he received, George says that "nearly 70 percent of them focused on the workplace"—clearly an unrecognized arena where the actual dramas of race relations play out. Several workshops, a director and a script later, the product of George’s initiative is Everyday People.


At a packed-house Memorial Day screening at BAM, writer-director Jim McKay (Girls Town, Our Song)—who’s soon "moving back to Brooklyn"—and executive producer George—"an 18-year resident of Fort Greene"—drove home the fact that this is very much a "Brooklyn story." Originally titled Brooklyn, the film, George says, examines issues "that all central Brooklynites deal with every day." When one thinks of films about "race in Brooklyn," there really is only one comparison—and Everyday People pushes more racial buttons than any film since Spike Lee’s Do the Right Thing.

Taking John Sayles’s City of Hope and Lee’s Get on the Bus as models, McKay weaves nine different characters into a larger story of what happens when a neighborhood restaurant decides to close its doors. Though actually shot at the now-shuddered Ratner’s on Delancey Street, "Raskin’s" is a Junior’s-like diner, meant to be located in downtown Brooklyn’s Fulton Street Mall. Raskin’s is a venerable family-run neighborhood institution whose owner, Ira (Jordan Gelber), has recently agreed to sell the diner to a mega-developer eager to bring in a Hard Rock Café—a Brooklyn story, indeed.

The proposed closing of the diner threatens the livelihoods of Raskin’s diverse staff. Some, like the grandfatherly maitre’d Arthur (Stephen McKinley Henderson) and the ex-con dishwasher Sol (Steve Axelrod), have toiled at Raskin’s for years, and now face uncertain futures. Meanwhile, younger staff like Erin (Sydnee Stewart) and Samel (Billoah Greene) plan to pursue other options—the former wants to tour on the poetry slam circuit, while the latter, a product of the foster care system, now intends to go to college. Interwoven into these and other stories are poignant dilemmas of race and class. While Erin, who’s black, clashes with her mother (Iris Little-Thomas) over her pursuit of a life in the arts instead of the corporate world, Jolleen (Bridget Barkan), a white cash register girl, has to figure out how she’ll take care of her mixed-race son.

While nearly all of the ensemble acting is strong, Ron Butler gives a particularly fine performance as Ron Harding, the predatory, but ultimately conflicted black real estate executive eager to close the deal with Raskin’s. Early on, Harding squares off with Aqbal (memorably played by Reg E. Cathey), a street vendor who questions Harding’s blackness while at the same time dubiously hawking ribbons promoting black identity. In the film’s brilliant final scene, Harding is chastened by the wisdom of an elderly black woman regular at the bar, who reminds him that when it comes to developing the area, "You can’t wash out all the color and keep the flavor."

In addition to the many excellent montages of Brooklyn daily life, what also gives the film local flavor is the score by Fort Greene’s Marc Anthony Thompson, who wanders in and out of several scenes like a troubadour. Thompson explains that what attracted him to the script was the "way it sets up tiny surprises that question your own expectations and perceptions." His moody score captures that sense quite well. "As far back as my first read-through and then several re-writes later," Thompson adds, "I imagined it being played on this tiny guitar that I bought at a stoop sale on Clinton Ave. for 20 dollars. I mean, how much more Brooklyn can you get?"

McKay and George make no secret of their desire for Everyday People to become an HBO series, which is one reason that many of the stories are left unresolved in the end. The stuff of an excellent contemporary series—sharply defined characters facing real dilemmas, in this case of race and urban life—is definitely here. What’s needed is for Ira, the restaurant owner, to become more like Danny Aiello’s Sal in Do the Right Thing. In Brooklyn, sentimentality is usually backed up with a baseball bat.