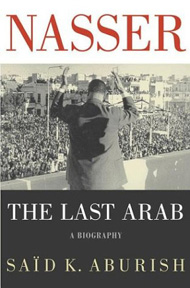 "It is a sad and disturbing comment on our times that today’s most popular Arab leaders are Saddam Hussein, Yasser Arafat, and Osama bin Laden —a thug, an incompetent, and a charlatan," writes London-based journalist Said K. Aburish in his biography of the former charismatic and controversial Arab leader, Egypt’s Gamal Abdel-Nasser. Sad and disturbing, indeed. But the fact remains that there’s never been an Arab who has not been controversial and disturbing to the West, and Nasser, according to Aburish, was for a time as popular as the Prophet. In his new biography Nasser: The Last Arab (St. Martin’s Press, 2004), the author examines that popularity, placing Nasser in the context both of his times as well as what is currently unfolding in the Middle East.


Nasser was the first and last post-colonial leader of the Middle East to put the Arab nation back on the map as a concept, if not as a fact. He evoked the concept of a greater, unified Arab nation—tied by language, history, and, most importantly, religion—from the Atlantic to the Gulf, an idea that ran counter to the West’s agenda of maintaining a fractured and individualized Middle East. Nasser, in the eyes of many Arabs, and to the ire of the West (which includes Israel), stood up to the colonial powers as well as that region’s new master, the United States. "To American, British and European publics, and members of the U.S. Congress, Nasser was…the Saddam Hussein of his day."

Yet, according to the author—who maintains a critical respect for the man known as Al Rayyes (the chief)—Nasser’s Arab nationalism had a major flaw. He could not move beyond his charismatic leadership to politically organize the "street" and the souk (market place) into a movement that would remove the kings, emirs and sheiks—in other words, all those who did the bidding of the West against the wishes of the Arab masses. As is the case with most charismatic leaders, Nasser was better at rousing the masses than actually building political institutions. In many ways, the rise and fall of Arab nationalism is the story of Nasser.

When Nasser died in 1970, thwarted by his inability to implement his ideas of a united Arab nation, he had been checked by the West (led by the United States); defeated by Israel in the Six-Day War; and undermined by his sister Arab countries who found him to be a threat to their regimes. In his wake, however, came Islamic fundamentalism, which had been used by the West against him. Nasser, as a secular but devout Muslim, was a great foe of fundamentalists, especially Egypt’s Muslim Brotherhood. As Aburish sees it:

Modern Islamic fundamentalism began with King Faisal [of Saudi Arabia], with solid American support. It was created to fight the enemies of Allah, at the time Nasser and the Soviet Union; but…this movement has turned into a monster of its own.

A similar pattern emerged with Saddam Hussein, who was also encouraged by the United States and the conservative Arab nations to act as a bulwark against the dire threat of the 1980s: Iran’s Islamic revolution. And we all know where that has led U.S. foreign policy: towards initially supporting the likes of Hussein as well as Islamic fundamentalists in Afghanistan, the latter giving rise to Al Qaeda and Osama bin Laden.

As president of Egypt, Nasser was a dictator, and although a relatively benevolent one, he was still an undemocratically elected leader. He obtained his position in a coup against King Farouk in 1952, which he led as an army officer of the Association of Free Officers, a cabal of progressive military men who hated the British and the corrupt Farouk. Nasser, however, was never—at least according to the author—a bloody tyrant like Assad of Syria or Iraq’s Hussein (except, that is, when Nasser was dealing with the Muslim Brotherhood). Although torture was committed under his regime, the author tries to absolve Nasser of any overt, mindful complicity with the practice.

Nasser in general was progressive, however: he instituted land reform for the peasantry, believed in women’s rights, and sought to organize the peasantry, workers, students and women into associations that had some limited say in Egypt’s circumscribed political system. He resisted the religious influence in the legal system sought by Islamic fundamentalists, which relies on repressive sharia jurisprudence. Nasser was also a staunch anti-Communist, but was still practical enough to get arms from the Eastern Bloc when refused them by the West; though he dealt with the Russians, he never fully trusted Moscow. Nasser, in short, never believed in trading one form of colonialism for another.

Written in clear, sharp prose, Aburish’s biography vividly portrays a man who was constantly walking the high wire of international politics during the Cold War. Nasser spent most of his presidency trying to keep his nation free from foreign poachers, the West, and the communists. He tried to deal with Israel as the national leader of the preeminent Muslim/Arab nation/state, and at the same time he sought to restore the "dignity" the Arab masses had known as the rulers of a greater Arabia from the Atlantic to the Gulf. Nasser’s rise also occurred as that world was shifting from the colonial regimes once dominated by Britain and France to those supported by the United States after World War II. Never a colonial power with holdings in the Middle East, the US, contrary to today’s image, was seen as a friend and counterweight to the British and the French in the Arab world. Nasser himself was a fan of American culture: he loved American films and heavily smoked L&M cigarettes; and he admired JFK and became despondent over his death.

What put Nasser on the map as an Arab leader? Simply put, he bucked the international system. He obtained weapons from Czechoslovakia after an arms embargo had been imposed by the West. Nasser also became a leader of non-aligned movement, which tried to remain neutral between the West and the Communist bloc (much to the horror of the United States), but at the same time he constructed the Aswan High Dam with the support of the Soviet Union. Time and again, Nasser played the Cold War powers off against one another.

What seemingly made him Al Rayyes in the Arab world, of course, was the nationalization of the Suez Canal in 1956 (to understand how this is viewed as a seminal event in modern Arab history, see the 1996 Egyptian documentary Nasser ’56). That move galvanized what we now call the "Arab street," which loved Nasser’s defiant action. After Britain, France, and Israel retaliated militarily, Eisenhower saw the whole thing as getting out of control, and soon forced the British and French to back down. Ike’s move, of course, was based more on his desire to maintain regional stability than on any sort of support for Nasser’s action. Three years earlier, the US had sanctioned and organized a coup against a democratically elected leader in Iran, Mohammed Mossadegh, who had nationalized the country’s oil when the British balked at giving the Iranians a 50/50 split of the profits from their oil.

Still, in the eyes of the United States, Nasser in general was "uppity." After all, Egypt was a nation that refused to join the Baghdad Pact, the Middle Eastern version of NATO that was a defense treaty against communism. For his part, Nasser thought that things could be worked out between the US and Egypt. Aburish writes:

Nasser wrongly believed that the two countries could coexist and always hoped for better relations between them. But the differences of opinion over Palestine, oil, regional hegemony, Arab unity, and the relations with the USSR stood in the way. While still accepting that he was anti-Communist, the United States no longer believed he could stop the USSR from attaining a strong position in the Middle East. The United States believed the USSR was using Nasser, while Nasser wanted to use both sides.

Precisely at the moment of decolonization, the U.S. stood in the way of Arab nationalism.

The beginning of the end Arab nationalism, according to Aburish, was not the Arabs’ defeat in the Six-Day War of 1967 (which "resembled an act of mass suicide"), but came after Iraq’s takeover by Abdel Karim Kassem, an Iraqi military officer, almost a decade earlier. Kassem and other nationalistic officers had approached Nasser years before about supporting a coup against the Hashemite throne, but they were rebuffed by Al Rayyes. However, when the coup was successful Nasser attempted to glide into Baghdad on the wings of Nasserism, trying to affix Iraq to the United Arab Republic, which consisted of Egypt and Syria. The new boys on the block flatly rejected Nasser’s overtures. What ensued was a very destructive power struggle that left 2000 Iraqis dead, and the USSR and Britain backing the Communists who supported Kassem in Iraq because they were against Nasser! Aburish surmises:

This feud was the low point of Arab politics in the twentieth century. Practically all the important leaders got involved and were exposed as lacking substance, not only in resorting to invective and subordinating principle to expedience, but in terms of the bitterness manifested by each side against the other, considering what was at stake.

This kind of internecine Arab politics, which had initially allowed for the establishment of the state of Israel, has seldom been acknowledged as a factor in Arab political history, except in books such as Eugene Rogan’s and Avi Shlaim’s edited collection The War for Palestine: Rewriting the History of 1948 (2001). But in the view of Aburish and others, the Six-Day War was just the most dramatic manifestation of the tensions, lack of trust and cooperation that Arab nationalism had failed to establish in spite of Nasser’s rhetoric.

The big prize, uniting the Arabs in one big, strong country, was gone. It was the threat of creating such a country which gave him stature; and it was the emptiness of this threat, the fact that he couldn’t even pursue the prize, which haunted him.

Nasser may have been the Middle East’s "last Arab," but he was also its greatest Hamlet. The subtext to Nasser’s story lies in his eventual realization that a united Arab nation was an illusion, much in the same way that the fundamentalists’ demand to return to a pure and theocratic Islam is also an illusion. With the demise of Arab nationalism, the Islamic fundamentalism—or political Islam— articulated by Sayyid Qutb and practiced by Al Qaeda has tried to fill the void. Meanwhile, the present battle for Iraq, a stand-in for the Middle East itself, is now a stage for the Bush administration to act upon its delusion that American democracy can be imposed on an Arab country lacking the necessary preconditions for its existence.

Nasser, by contrast, was operating within a

cultural logic drawn from his own people’s history. As for the Bush administration, one wonders what drives its ambitions. Could it be, like the Islamic fundamentalists, messianic hubris?

Norman Kelley’s The Head Negro in Charge Syndrome: The Dead End of Black Politics is now available from Nation Books.

From Center to Middle and Back Again

Chicago has a relatively limited commercial gallery system compared to other major national and global metropolitan areas, which has contributed to an overall context that doesn’t strictly center the commercial gallery as the sole path to a long-term, rigorous practice.

Devouring the middle to see the ends

Much has been written about how global communication technologies have fostered a network-based society, even a network-generated society.

Not long ago the great English critic and historian of photography Steve Edwards complained that art historians have “paid remarkably little attention to the petite bourgeoisie,” and particularly so its role as “the invisible social glue.

New Yorkers have witnessed a wave of mid-tier galleries close shop over the past year. Is this part of a wider trend?