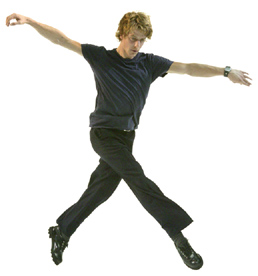 Matteson at Symphony Space, May. Photo by Bob Handelman

The Bessie-award winning choreographer Paul Matteson, together with friends—mostly fellow David Dorfman company members—offered an evening of adventurous dance at Symphony Space (May). The performance, a recitation on the most physically challenging ways to hurl, toss, and move the body, featured solos and duets choreographed by the dancers and collaborators.


In Joseph Poulson’s Rustytime, which is a meditation on the power of words, he dances as observer Heather McArdle calls him "names". It starts innocently enough, "piggy, doofus, dingleberry" she calls Poulson. But it then takes a serious turn as her name-calling becomes more malicious—"loser, idiot." All the while Poulson unleashes a flurry of movements. He squats and then shoots into a handstand. One moment he executes a perfect balance, but then upends himself the next. Poulson eventually lies prone, reiterating the litany of insults. It sounds as if he has come to believe them. But then he begins to move again, his body seemingly pulling him up to repeat the athletic phrases, this time without the insults. Instead, Poulson simply states his name.

In the duet Step Touch Matteson and Jennifer Nugent provide us with a glimpse into a relationship. Matteson and Nugent exude a we’ve-been-together-for-years rapport by anticipating each other’s every move. They start slowly with small knee bends and build into robustly articulated arms. Although the costumes—dark gray suits—suggest a kind of everyman and everywoman ubiquity, it is clear that this couple has their fair share of individual quirks. In a playful moment, the dancing turns to a series of jazz dance moves—step touches—punctuated by the stereotypical entertainer’s audience "point." The silliness devolves into more serious issues. Something goes awry, resulting in Matteson repeatedly picking up Nugent by her legs and dropping her to the floor. Nugent catches herself with her arms and then the lift is repeated until the two can no longer perform the same old worn out phrase, movement, pattern. The emotional evolution of the piece is sometimes hard to follow, but somehow how it doesn’t matter. Who knew that dysfunction could be so compelling? 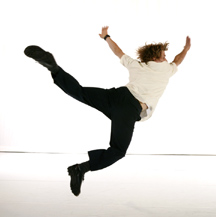 Matteson at Symphony Space, May. Photo by Bob Handelman

I Simply Live Now is the final piece and this solo, choreographed by Peter Schmitz, is a tour de force for Matteson. Here, Matteson is able to display his abundant physical gifts. His back is incredibly articulate. He arcs and bends in seemingly impossible ways; his joints are well-oiled and he is incredibly spry. Snippets of voice-over text allude to poor health. Crutches and plastic shards shaped like vertebrae frame the stage. Matteson’s limbs give way—a sudden knee bend sends him careening across the stage. At times he can barely stand, the soles of his feet no longer touch the ground in a way that can provide balance. Illness seems to overtake him—the music from the The Tindersticks and The Used highlight the deteriorating body. In the piece’s only faltering section, Schmitz has Matteson dancing on crutches.


As I Simply Live Now concludes, Matteson repeats the movement phrase that opened the piece, dancing to Schubert. The phrase grows in depth and one has the sense that this body or character is dancing for the last time. I was left wondering what remains when the body is no longer able to move.

SHANTI CRAWFORD is a choreographer and writer based in Greenpoint.