June
One could shell out $20 or more to see some of the larger dance names that will be performing in New York City this month. There is the Parsons Dance Company (Joyce, June 1-13), whose summer season will feature a new solo by David Parsons himself; the Mark Morris Dance Group (BAM, June 8, 10-12) will perform the New York premiere of All Fours set to music by Bela Bartok and the world premiere of Seven Visions with music by the jazz trio The Bad Plus at BAM; and Trisha Brown will be at the Guggenheim for the museum’s Works in Process series (June 6 and 7). In addition, any balletomanes out there can take in American Ballet Theater and New York City Ballet’s spring seasons. ABT will be performing the classics—Raymonda, Don Quixote, Swan Lake, Coppelia and Romeo and Juliet. Such performances allow for ABT to showcase its new crop of young ballet stars, including such performance pair-ups as Ethan Stiefel and Gillian Murphy, Paloma Herrera and Julio Bocca, Jose Carreño and Nina Ananiashvili and Irina Dvorovenko and Maxim Beloserkovsky. And NYCB continues into the spring with new ballets by artistic director Peter Martins and several all Balanchine or Balanchine/Stravinsky programs in mid-June. There is also a smart and stunning exhibit at the New York Public Library for the Performing Arts that pays tribute to Margot Fonteyn, the grand dame of all things classical ballet and the long time partner of Rudolf Nureyev who was twenty years her junior (go Margot!). But, beyond all these glittering names and star-studded affairs, there is an equal amount of dance going on in lesser-known, off-the-beaten track venues where good work can be seen for a mere $10 or $15. And these younger companies and choreographers, experimenting with site-specific work, new media projects and performances, and performance art, are blurring the boundaries between artistic disciplines and helping to extend the definition of what constitutes "dance." Even more, they are in need of open-minded, adventurous audience members.

Before Nest, the artists’ residency in DUMBO, closes its doors later this month, ending a 15-month, rent-free residency, choreographer Koosil-ja Hwang will present her new dance and mixed media work Deadmandancing Excess. With live video by Benton-C Bainbridge, music by Geoff Matters and the work of Liminal Projects, this piece will explore the act of dying. While this may seem a rather morbid subject matter, the raw intensity of Koosil-ja’s choreography and the live video projections will nevertheless make the work pulse with life.

In a collaborative site-specific work, four choreographers—Eleanor Bauer, Beth Gill, Heather Lang, and Hannah Spongberg—will attempt to meld together their diverse movement vocabularies on the rooftop of East Williamsburg’s Office Ops. The work, fittingly titled The Sunset Clause, will take place at sunset and attempts to present the "urban experience" in all its variety and multiplicity, tackling such issues as "emptiness, disaster, pop culture, contemporaneity, femininity and identity." But all the heady theory aside, dancers on a rooftop at sunset, moving against the backdrop of the cityscape, is a simple enough statement in and of itself—one that presents the body in movement, in, and slightly above, the urban environment. In addition to the performance, there will be drinks and live music. 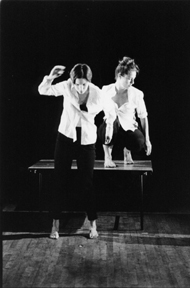 Lynn Marie Ruse and Alison Russell in Homage. Photo by Chris Coxwell.
Homage: A Rumination on the Grand Themes of Love, War and Justice

Headed by two Lynns—Lynn Brown (male) and Lynn Marie Ruse (female)—the dance and performance company FreeFall (ltd) is a company wholly committed to collaborating with visual artists and composers and also works diligently to bring dance into community environments through site-specific works. For its upcoming performance as part of the Flea Theater’s dance series, the company will perform Homage, a work in three parts that deals with such universals as love, war and justice. The segment on war will combine the opening speech of the war film Patton with vaudevillian movement. Spaghetti westerns will round out the justice section and the love segment will begin with the intoxicating passionate Ravel’s Bolero and wind its way toward illusions to the Weimer Republic. In short, Homage seems to be a work that will touch upon some of the contentious issues of the 20th century, while simultaneously acknowledging our country’s current state of messy affairs.

I’m not sure what, if anything, the streaming together of dance works’ titles means these days. Perhaps it’s that playing with language—phrases, words, syntax—is analogous to how one composes a dance. Choreographers work in phrases, develop a vocabulary and develop their own kind of grammar—a grammar of the body, if you will. But this fact seems even more true when one knows that a dancer/choreographer is also a poet, as is the case with Sally Silvers. Silvers, who has been performing in New York since the 1980s, is also a published poet, writing in literary journals and magazines. She will perform a new solo Dang Me as part of Danspace Project St. Mark’s City/Dans series. The solo is semi-autobiographical and is set to the melancholic music of her home state, Tennessee. Also on the program is her new group work Dreamsdocometrue, a two-part "dreamscape" with subtitles Metro Nightie and Lustration that seem to underscore this choreographer’s poetic sensibility.

Swiss-born and Brooklyn-based choreographer and visual artist Andrea Haagni and her visual motion construction company AMDat will present a new site-specific work as part of the Lower Manhattan Cultural Council’s SiteLines series in mid-June. Here, five women seemingly trapped in a corner of a vacant cigar store in Lower Manhattan, will navigate the limits of such a space, simultaneously exploring the contradictory themes of liberation and imprisonment—two very timely ideas floating around our own cultural landscape.

Martha Graham dramatized herself into such Western Greek heroines as Clytemnestra and Medea and in so doing created a visceral, wrenching, deeply emotional modern dance vocabulary—one filled with her trademark contractions and releases—and one that used narrative as its base to express the deep-seated emotions of the psyche. So perhaps it isn’t too much of a surprise that she herself has become a modern-day, mythic heroine in her own right, one worthy enough to be impersonated by the actor and dancer Richard Move. Move’s well-known, irreverent/ tribute to Graham, titled Martha at Mother was initially a nightclub series at the downtown performance venue Mother. Ghostlight, directed by Christopher Hermann and starring Ann Magnuson, Isaac Mizrahi, Mark Morris and Deborah Harry, is now the film version of this production and is scheduled to open at The Quad Cinema on June 23. In celebration of the film’s distribution, by Lot 47 Films, Move will present two performances of his nightclub "act" now titled Martha at Jane Street on Thursday, June 17.

Tickets for the live performance at The Jane Street Theatre are $40 and $50. The film is $10. For more information visit:

Thresh, a Brooklyn-based performing arts collaborative, headed by artistic director, Preeti Vasudevan, presents an evening of three new works at the Joyce Soho at the end of June. The works to be performed here are in line with the company’s mission to bridge classical and modern dance idioms. Vasudevan is trained in classical Indian dance, or Bharatanatyam, and also in modern dance’s Graham and Cunningham techniques. She also has an M.A. in dance studies from the Laban Centre London and is a dance scholar as well as a dancer/choreographer. Along with her artistic collaborator, Elif Isikozlu, who also has an M.A. from the Laban Centre London and whose work focuses on women and the body in society, Vasudevan aims to create a new, multi-disciplinary form that draws on both Eastern and Western dance practices. One work on the program is loosely based on a play about two sisters—one living and one dead. Along with Vasudevan, Nilaya Sabnis, Joy Havens, Lauren Ohmer, Rachel Golub and David Eggar will perform.

When Hurricane Sandy hit New York City in 2012, the storm surge rose over thirteen feet in Battery Park, breaking a record set in 1960, and the New York Stock Exchange was forced to close for two days, the longest closure due to weather since 1888.

Women have shared their wisdom with one another for millennia, in oral histories that teach and inform subsequent generations of women about family, home, sex, power, politics, and survival. But patriarchal histories didn’t include these contributions. Huh!

Each June, New York City observes Pride Month by celebrating and commemorating the LGBTQ community with vibrant events and exhibitions of all kinds. This year, among innumerable festivities, New York Live Arts facilitates “The House Party,” part of a multi-faceted celebration and remembrance of Bill T. Jones/Arnie Zane Company Co-founder Arnie Zane. Artist Zoe Leonard displays her work Strange Fruit at the Whitney, and discusses its themes of mortality and discrimination with the Brooklyn Rail. The annual Pride March floods 5th Avenue, and devotes a moment of silence to members of the community lost to AIDs and discrimination. The Joyce Theater provides a week of queer programming with performances from both Madboots Dance and Sean Dorsey Dance.