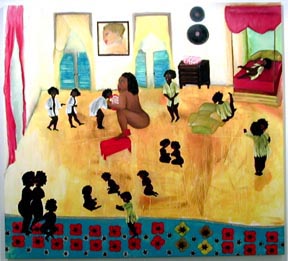 The clashes between the factions and subfactions of our aesthetic tribes are as unrelenting as conflict between the Protestants and Catholics in Northern Ireland, or closer to home, the Bloods and Crips on the streets of East New York. Of course in art warfare, no one gets shot or bludgeoned, casualties are just sidetracked careers and malicious critical indifference. The schism between abstract and figurative painting is a ready example. Phillip Guston was a heretical convert who influenced a generation of artists to reconsider the potentials of figurative painting. Now, nearly a quarter century after Guston’s death, there are still bastions of the “art world” hierarchy holding on to the notion that “American type painting” means some derivation of Abstract Expressionism. Happily, at the much ’dissed Working in Brooklyn exhibition at the Brooklyn Museum, the curators avoidance of any stylistic or thematic overview led me to discover “Parlor” (2002), a quirky large black painting with female forms and odd notations by Xiomara De Oliver, which pulled me in with it’s uneasy balance of abstract and figurative ingredients—like the bitterness of strong black coffee, it need not be sweet to deliver its jolt. It was to my eye, one of the standouts of that motley show.

Scarlets in Ghent, at RARE Gallery, presents six large paintings by De Oliver, which although not without minor disappointments, confirm my initial interest in her work. The title piece pictures two large dark female nudes, one frontal, the other depicted from the rear, apparently reaching for strawberries. Other smaller figures scattered across the composition also seem to be picking or gathering the fruit. Large fuzzy blocks of pastel color establish the ground, while a black arch that could be the edge of the world secures the top of the canvas. Without the figures, “Scarlets in Ghent” could pass for a Rothko-esque color field work. De Oliver tilts the plane of the ground, and brings the horizon flush with the top of the painting, the placement of bodies, their flattened and primitively accentuated curves taking on a naïve almost petroglyphic quality. Written vignettes like “I Give Freely” and “driver food by the barrel” add a diaristic component that implies an indecipherable code of personal reference. Parallel contemporary practices run the gamut from the eccentric genre works of Tomas Trosch via Florine Stettheimer, to Nicholas Africano, Kathy Bradford, Chuck Yuen, and of course Robert Colescott. However De Oliver is mining a unique vein informed by identity politics and feminist philosophy, and the work denies easy classification as either abstract or photo-derived realism. She is instead performing something that Camus might have termed “cultivating harmless eccentricities.”

“Queen Me” (2004) is an interior with a purported self-portrait. The floor is a deep yellow wash, the queen is a larger, lighter and more realistically rendered form, posed in an unnatural squat, with one foot on a red hassock. She is attended by several pairs of smaller, darker, flatter “courtiers.” An idealized portrait in lighter tones, echoing her profile, decorates the rear wall. Questions of status and class related to the relative shade and scale of the figures provoke uncomfortable associations with modern culture’s perceptions of “women of color.”

Perhaps the most satisfying picture for me was “Theories I Have About a Good Life” (2004). A thick red band divides the canvas horizontally. A woman in a turquoise dress on the left is surrounded by a group of seated monkeys. A black field in the upper right corner contains drawings of dogs that are as artless and direct as a child’s sketch on a blackboard. Other figures float around the composition and vary from black figures with yellow hair to mocha with curly brown manes. Written scripts include “theories are not like cherry pie” and “break the clutch right out of a ’64 Mustang.” In some paintings, when there is a profusion of tiny figures without larger contrasting shapes acting as a compositional vector, the picture tends to slip into an easy “cuteness.” Nonetheless, with this wide repertoire of devices at her disposal, De Oliver has plenty of material to conjure with and undoubtedly keep us questioning.