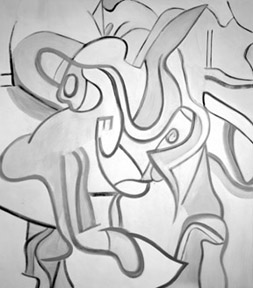 When New York was New Amsterdam in 1626, the Dutch West India Trading Company owned our little village colony that extended from South Ferry as far North as the stockade that later came to be called Wall Street. Three hundred years later in 1926, a twenty-two-year-old Dutch artist stowed away on a ship out of Holland and landed in New York. Willem de Kooning was born April 24, 1904, and this year marks his centennial.


Three galleries are celebrating his work and his place as one of the century’s premier artists, and each exhibition has surprises: previously unexhibited paintings at Gagosian, a 1929 still-life at Mitchell-Innes & Nash, and a strange oil on paper collage at Richard Gray that predates Pop technique. The most comprehensive exhibit is a world-class treat curated by David Whitney at Gagosian. Walk in the main gallery and you’re surrounded by stunning late paintings as big as king-size mattresses. Think Donald Duck, Al Capp’s schmoos, giant tulips, and squashed frogs. Pollock may have said "I am nature," but his work feels almost conceptual compared with the outpouring of natural and unnatural forms that flowed from de Kooning’s brush. He was the "natural," in love with paint, and the late work is a cacophony of color resembling the Sunday funnies that must have delighted his eye on his arrival in America.

De Kooning left grammar school at twelve to apprentice as a commercial artist, later in department store display. He was interested in the abstract painting of Mondrian as well as the symbolist painting of Jan Toorop. America itself in the world’s imagination was a kind of comic book filled with gangsters, cowboys, Indians, bank robbers, movie stars, and money: a wild, larger-than-anything canvas that could contain every dream imaginable. Sunday comics were a riot of primary color, reigned in by bold outlines and blocky boundaries.

In de Kooning’s late works, a jumble of broad, sometimes ribbon-like strokes of paint capture the essence of Hals, Rubens, Ensor, and Mondrian. Delft blue, copper green, brick orange, and luscious tulip reds and yellows capture cartoon-mannerist, gestural abstraction with glimpses and memories of landscape and friends. Often the forms echo those painted by his wife, Elaine, in the late 1940s and early 1950s. One, " The Cat’s Meow" (1987), appears as if it might be a self-portrait. You can make out the arms of a chair, a knee, a bulging eye that morphs into a "DE." Next to it is a hand holding a brush, thumb up.

With his formidable facility as a draughtsman, de Kooning worked both sides of a line like Ingres, at a time when an artist’s ability, especially an abstract artist’s, was measured by his/her accuracy in life drawing. De Kooning’s gesture was natural, but sharp or broad, relaxed or jagged, it was as accurate as Ingres. Essentially descriptive, his method was like Finnegan’s Wake via the Danish philosopher Soren Kierkegaard. When knowledge leads only to doubt, ambiguity is the remaining option. Kierkegaard questioned the limits of certainty, especially the certainty of action; de Kooning pushed ambiguity to extremes. Donald Duck’s head sporting Mickey Mouse’s ears becomes a matron’s torso and breasts. (Check out the small collage "Woman, Green" at Richard Gray.) A painter friend remarked once that she thought collage was the real revolution in art in the last century. De Kooning sliced up drawings and combined them with magazine advertisements, then re-combined them and transferred the eye-churning, mind-bending anti-compositions to canvas tacked to the wall that actually functioned more like a floor, bed, movie-screen, or all three at once. He used projectors, vellum-transfer, whatever it took to get an image he wanted onto the canvas. (Thomas Hess first brought up the bed idea in a 1953 article, suggesting Procrustes’s bed in particular. Andrew Forge visited the idea in 1969 in a wonderful piece on de Kooning’s retrospective.) Things, places, memories, women, still-life objects fold into one another. Like most moments in New York, everything is a surprise. Léger, whom de Kooning worked for on a WPA project, delighted in describing how people on the street would change color while you talked with them because of the neon lights.

At both Gagosian and the concise view of de Kooning’s career at Mitchell-Innes & Nash you can see great work from each period—big expanses of light, flesh, and water; the work structured around big, Kline-like brushstrokes. In "Bolton Landing" (1957), brushed bars of industrial looking paint evoke the Hudson River landscape inhabited by his friend David Smith’s painted iron and steel monumental sculpture. The equivalent at Gagosian is the 1958 "Suburb in Havana." Across the floor from "Bolton Landing" is one of the "impossible" paintings of the late seventies and early eighties: "Untitled V" (1980), in which wavy smears of troweled white, marbled with thalo green and cobalt violet, pulse and hover like Northern Lights over a still pond. If jumping ship was his first big splash, de Kooning kept the water moving afterward. His paint handling spanned an encyclopedia of traditions. His imagery groped back to wide-eyed Isis. Bruegel and Cranach’s women come on board.

Passion creates its own space, scale, and absorption. To look at a de Kooning painting is to look at a thorough engagement: right-side-up, upside-down, inside/outside, painting and drawing. It is a demanding effort and concentration on the part of the artist, and when the event, relationship, whatever one chooses to call it is over, the painting is either done or not; finished, or the painter is finished with it. Sometimes the resolution is dramatic, like the buttery splat of pigment launched by a large spatula that signaled the completion of "February" (1957) and cleared up once and for all the mystery about what constitutes an "accident" in gestural abstraction. One way or another, a de Kooning work is done, or done-with, and is either allowed to leave the studio or not.

A disproportionate number of de Kooning paintings are great. He was passionate about art, and his work does affect the way we see the world, and what we expect from art. "We are not yet living in a world where everything is self-evident," he wrote in a statement in 1951. Gallery attendance for these centennial celebrations appears to reflect his enthusiasm.

The theater has always been the most backward of all the arts. Because on the surface the theater seems most life-like, I suppose.