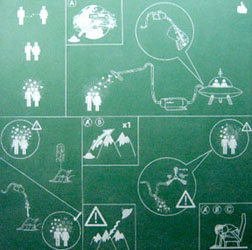 Drawing its title from a line in Mad Max: Beyond Thunderdome, Two enter and one leaves at YEAR has something in common with the post-apocalyptic Bartertown where Mad Max fights for his life against a mentally challenged giant controlled by a midget. It’s not the most politically correct battle sequence in film history, but the barbaric spectacle seems to be an important point of departure for the work.


Jenny Vogel’s baleful multimedia installation combines footage of war with real time video of the gallery and the streets of DUMBO. Vogel’s work is situated in the front of the gallery where a small black-and-white monitor sits next to a rather utilitarian-looking video switch box. The looped video footage of people running through the streets as artillery detonates gives way to a moment of relative calm, and the monotone narrator states, "and nothing happens." The footage cuts to live feed of the back of the spectator looking at the monitor in front of the bright window. Vogel implicates the spectator in the conflict, her monotone narrator saying "I was looking out the window." The video jumps to the industrial streets of DUMBO before transitioning into brief, chaotic scenes of urban warfare. Vogel’s narrator steadily speaks towards a climax, but the video loops fall short of catharsis, and the cycle begins again. The grainy video has a lyrical sadness that is echoed in the drab confines of the space and the black-and-white Xerox images of a female form silhouetted against the skyline.

The cyclical relationship Vogel establishes continues in the second space of the gallery with Aaron Steffes, Jade Townsend, and Christian Heilig’s grouping of installation and video. Superficially there seems to be little connection between these disparate works, but several interesting relationships gradually emerge. Aaron Steffe’s eight-minute video invites the viewer to contemplate an absurd scenario in which the narrator is accidentally electrocuted and paralyzed beneath a chair in his living room. There, trapped against his will, he is forced to contend with the objects in his immediate grasp: a book of Communist philosophy by Chairman Mao and a container of Q-tips. The narrator reads Mao’s text from page 142 on, and begins to theorize about the formation of a classless society using the Q-tips. As with Vogel’s video, there is no conclusion, as the enlightened narrator still lies immobilized on floor, helpless to change his physical reality.

As one watches the video from the couch, the chants and murmurs of Steffe’s piece mingle with the strained guitar notes from Jade Townsend’s comic installation. Sitting with his back to the entrance, a man wearing a flannel shirt is hunched over a guitar, his long hair obscuring his face. The illusion quickly gives way to a comic scene about artistic frustration and perseverance as the would-be guitarist endlessly plucks away at the first few notes of "The Rainbow Connection" from The Muppet Movie. The guitarist is positioned in front of a window with a plant, rendered in black lines. The empty bottle of whiskey and a full ashtray next to his right foot offer a glimpse into the futility of the effort. He struggles to play a song of hope while self-destructing in the process.

The themes of violence and frustration become increasingly personal as the show progresses. German artist Christian Heilig builds an appropriately ramshackle, site-specific installation out of drywall, plaster, wood, and aluminum foil. The constructed space is the most formal work in the show, but it still reflects the attitude of the narrative works. The fractured structure, which extends around the corner into Vogel’s space, takes its cue from a smaller structure that looks vaguely like a mouth full of broken teeth. Large sheets of painted drywall are propped up by wooden splints, which are held together with gobs of plaster. While Heilig’s piece is about its own material relationship with the space, it picks up and focuses the raw, unfinished personality of the surrounding works.

Eric McDade’s graphic chalk drawing of aliens stealing a couples’ love to fuel their spaceship is a wry story tempered by its impermanence. The temporary green slate surface gives McDade’s explanation for relationship failure a limited life span. Unfortunately, it doesn’t quite resonate with the other open-ended works. McDade’s subversive take on the emotional conflict in relationships is perhaps too concise and lacks the same unresolved turmoil.

Two enter and one leaves may very well embody the Left’s feelings of frustration and helplessness with the Right. The artists, like Mad Max, seem like angry loners frustrated with the social, political, and artistic order and are willing to fight, or at least speak out. While Vogel’s piece is the only one to directly address the climate of war, the show’s implied theme of conflict is taken up in Townsend’s reflection on the continuous struggle for self-expression, Steffes’s metaphor for internal ideological conflict, and Heilig’s contradictory struggle to define space materially. The works seem to be predicated on impossible scenarios and conditions, and represent the inevitability of failure. It is the artistic representation of these struggles that make the politics all the more affecting.

As an admitted Francophile, I’m always drawn to the FIAF’s annual Crossing the Line festival. But as this year’s programming continues to prove this is not la francophilie de votre grand-mere. (If you want Bordeaux and brie in berets by the Seine… who can blame you, but this is not that kind of party).