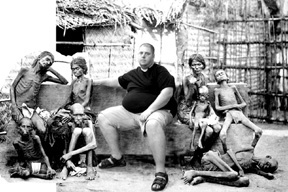 Returning home to New York City one February night after a party in Westchester County, I was mesmerized by grave ads inside the Metro North trains publicizing the NYPD’s Terrorism Hotline. A little drunk and a lot disgusted, I called and confronted the confused operator with a series of sarcastically naïve questions about the nature of terrorism. One in particular tripped him up: “What is terror?”

Terror means a lot of different things right now, depending on religion, race, politics, health, profession, or some combination of several of these. The conception of terror posited in Exit Art’s group show Terrorvision is necessarily loose, with one general argument connecting all pieces—terror is life in 2004. Now that Bronx gang members who sought to “enhance their status through violence and intimidation” are being arrested for terrorism, the focus of such “evil” has expanded beyond the Taliban, perhaps to the point where this twentieth-century buzzword is being abused. While terror 2004-style isn’t really a concept a curator could hope to pin down with any degree of accuracy or straightforwardness, Terrorvision’s inclusiveness negates meaningful vision, probably intentionally. While the show includes a decent amount of incisive work on the concept, much of it remains in the realm of illustration. Examples of terror are evoked or alluded to without probing the nature of the concept—how the term has come to dominate American political discussions, the mere possibility of its re-occurrence fattening our already stratospheric defense budget, like Garfield gaining weight when he just thinks about food.

For example, Uri Dotan’s double-screen video “We Will Fall” is a visually elegant re-screening of the Daniel Pearl assassination on one screen and a CNN.com mini-movie of Pearl’s life and death on another. Images are blurred and move in slo-mo, the content abstracted to the point where it’s indiscernible as the famous murder without reading the wall text. Dotan alludes to the media/government superstructure’s capitalization on an American’s death as a scheme to drum up patriotism. While the legions of Americans who quickly became hooked on the voyeuristic news broadcasts “from the front” and their grainy, time-delayed images will recall the haunting seduction of that unintentional stylization, Dotan’s video situates itself within the norms of contemporary video abstraction and reads as docu-drama eulogy. On the concept of terror, it evokes little. Michal Heiman’s photo series Blood Test (2002) depicts “evidence of past aggression” (pools of blood on concrete, crimson stretchers), essentially recapitulating nightly news images without pushing the idea beyond documentary illustration.

Fascinatingly, Dotan’s is one of the only pieces directly addressing the news media’s effect on conceptions of terror. Let’s be honest, terror wasn’t a word you heard every day before 9/11. Now, in the “after” era, terror alerts crawl by on Fox News tickers and the New York Post does its best to use the word in giant tabloid headlines in at least half of its editions. Newspapers, TV news, and web sites like Yahoo.com won’t let us forget terror, even for a minute. These are the mechanisms that shape Americans’ conception of terror (in the public sense, anyway), and to not confront this reality really at all is one of Terrorvision’s most obviously missed opportunities.

Most reviews of Terrorvision in the art press have mentioned with a tone of glee or at least bemusement how the show includes several artists’ notions of personal terror. While the terror of health (a broken tooth, breast cancer, falling without being able to get up) is legitimately frightening, maybe more so than the terror of political aggression since in most cases it can be anticipated and thus fretted over, it feels like work for another show. Works of this nature consist of no more than a few pieces from the show’s fifty-something objects and stick out like a sore thumb in the context of the public gravitas the vast majority of Terrorvision’s work addresses.

There’s a lot of art that really works in this show, as well. Saoirse Higgins and Simon Schissel’s “Mechanism No. 1: War” (2003) is a toy drummer boy that, when wound by the viewer, triggers a projector whose image appears on the floor, showing bombs drifting to the ground to the militant cadence of the toy’s clashing cymbals. Impressive purely on the level that it actually functions, the toy wryly alludes to Americans’ exposure at an early age and subsequent desensitization to weapons, violence, and combat glorification. Lior Noiger’s video “Globe” (2003) is a split-screen projection of two spinning globes that screech to a halt simultaneously at two random corners of the earth. “What are we doing in Iraq?” countless Americans must be asking themselves these days, just as countless Americans wondered the same when body counts escalated in Vietnam’s guerrilla warfare. “Globe” is globalization in a nutshell, where reasons for aggression remain necessarily enigmatic in order to maintain good public relations and international powers trot around it with ears to the ground for the next lucrative diamond mine or oil field.

Dennis K. McGinnis’s “Self Portrait as an American” (2004) is perhaps the most haunting and effective in an aggressively confrontational way of all the work in Terrorvision. The digitally manipulated photo shows the artist, an obese American, second chin sagging, wearing a t-shirt, shorts, and sandals—the uniform of leisure—within a group of horrendously emaciated, naked, starving people. It’s a new American era we’re in now, and McGinnis’s piece is an honest expression of guilt and shame at the state of things, where we subsidize the overproduction of corn so as to make (very fattening) high-fructose sweeteners as a substitute for sugar and dump excess crops on other nations, out pricing native farmers. McGinnis nails an idea that drifts through much of Terrorvision’s work without really being elucidated very effectively: it might require a significant degree of self-consciousness, self-distrust, and maybe even self-loathing before we form a truly incisive vision of terror.