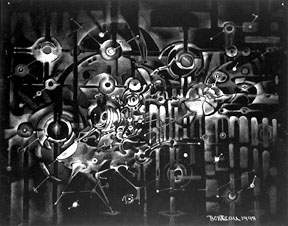 Matisse once said "He who wants to dedicate himself to painting should start by cutting out his tongue." It was the reason de Kooning revered Matisse, for not making an "ism," but rather just making paintings.


As I entered this beautiful survey of Lee Bontecou’s works on paper at Knoedler, all of my anticipated emotions and expectations, due partly to the recent press for her traveling retrospective, which will be at the MOMA in late July, hardly seemed to matter. What mattered was simply myself, as an observer, and the works. And even before I had a chance to contemplate the content, I was drawn to the work’s concentrated exertion and the incredible display of draughtmanship. The greatest pleasure can be found in the artist’s dexterity of hand and stunning control over her materials. Whether working in pencil, charcoal, casein, tempera, colored pencil, soot, or painter’s ink, Bontecou understands the elemental needs of her materials in relation to her thematic requirements.

For example, the application of soot from an oxyacetylene torch adheres to the minimal and expansive black field in a work from 1958. The two works of that period included in the exhibit point to her departure form quasi-figurative forms of synthetic cubism (in her early sculptures executed in bronze and terracotta), in favor of the early abstracted wall reliefs in welded steel, canvas, and wire. This transitional leap, which aroused great interest among artists such as Donald Judd and Eva Hesse in the early 1960s, could be found in two pictures from 1962 and 1963 (all of Bontecou’s works are untitled) that exemplify her landmark synthesis of visceral patched networks of irregular patterns over structured parts, and her mandatory scale with its three dimensional presence. While the former attests to the all-over imagery, the latter is subjected to the visual field, which contains real physical energy. They hover as a hybrid of molecular reconstruction and alien moonscapes.

Some of her drawings were made specifically for her sculptures. An illustrated in a study dated 1969 of an erect flower with six stamps and a robust petal was executed with such precision that Bontecou even rendered the number of bolts with which the sculpture was to be built in vacuum-formed plastic. Several other works from 1975 to 1999 suggest the artist’s fascination with the natural world and science as well as technology. The breadth of her ability to simultaneously alternate between subject matters is clearly as natural as the way an ordinary person goes about his or her own daily routine. I was exuberant, like Le Petite Prince, who, after meeting the wise geographer on the sixth planet, resists the ruin of his serenity before earth. From pacing back and forth slowly in front of the works, I found myself traveling in time and space. While the constellation of mechanized planetary forms at night, which seem to rotate in an unknown universe similar to that of the great Harry Smith’s imaginative reconstruction of Giordano Bruno’s solar magic and heliocentricity (Smith regarded Bruno as the inventor of cinema), filled me with the mystery of alchemy and science, the layerings of curvy horizontal clouds unveiling the sun reminded me of the visionary paintings of Charles Burchfield, though without his haunted and restless spirit.

Bontecou’s most lyrical and sensual aspect is revealed best in her repertoire of wave-like imagery, particularly one from 1982, executed in casein and acrylic with colored ground on plastic paper. In spite of the roaring convulsion of forces akin to Leonardo’s series of drawings depicting cataclysms, Bontecou’s deployment of colored hatch lines gives the work a feeling of sensual meditation yet also evokes a Redonian realm of fantasy. Perhaps the most expressive picture in the show is the one dated 1998 where the two pictorial fields, one above and one below, are separated by the window-like frame of the black paper. Within the reduced selection of color—purple, yellow, and white—Bontecou accents the multiple forms in both fields. Gliding up and down, the botanical forms placed outside of the frame from the bottom edge and growing into the middle band appear to be bringing the two worlds and all their inhabitants together.

From the nameable configurations to the unnamable ones, Bontecou’s private galaxy is both sublime and apocalyptic. Sublime in its hermetic beauty, and apocalyptic in its vision of inner and outer worlds in martial collision.

Matisse, among other Old Masters, gets the full Yuskavage treatment in her show of 14 new paintings at Zwirner, displayed in two rooms.