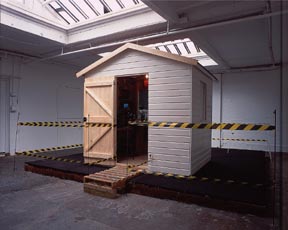 Sick fox is Berlin-based artist Klaus Weber’s New York debut: an introduction to some of the essential themes and variations in the multifarious artist’s oeuvre, with works in a range of media.

The back gallery evokes the pared down drama of a Robert Wilson stage set. Strong diagonal lines converge to create a zone of engagement for the viewer who gets caught the middle. A wall slices across the gallery’s rear right corner, onto which a video is projected. Perpendicular to this is an elongated bench, replete with graffiti, and parallel to it are two stacked speakers with a turntable on top. Overhead, two pairs of shoes dangle over two long black ropes, creating the feel of an abandoned lot. The urban abyss is countered, however, by the inclusion of wooden boxes, pocked with holes, suspended from the ceiling, dappling the room with delicate light.

The video on view is “Fountain Loma Dr/W6tSt. a fire hydrant, two police officers, a late model car and a sidewalk,” (2002) in which Weber placed a crashed car against a fire hydrant in Los Angeles. At regular intervals, water erupted and the car’s horn sounded, while police officers (hired by Weber) directed traffic and pedestrians around the scene. Weber, hidden, filmed spectators’ reactions: their simultaneous fascination and disregard for the accident interestingly reflect on the relationship between trauma and spectacle. Their presence also shifts the role participation plays in Weber’s work, away from organized engagement and towards spontaneous involvement. Earlier projects revolved around group contribution: for “Death Disco Club” (2002), Weber made a radio transmitter and temporary music studio in a van, and invited people to a public space in Berlin where their individual portable radios served as speakers for the temporary pirate broadcast.

Recasting “Fountain” in the private space of the gallery, Weber enlivens the film with the soundtrack “Kranke Fuchs” (sick fox), giddy German lyrics that embolden the images on the screen. Described as an album on “how to get rid of yourself,” it is available for $40 at the front desk. Integrated into the score is a high-frequency sound that makes crickets sing. In fact, bugs are present: they are invisible participants when the disc is not playing—and announce their presence inside the hanging boxes when the music starts. The noise in the gallery is a happy cacophony of electronic beat and natural din, and the results are a pleasing conflux of urban and rural association, which is surprisingly joyful.

On the speakers, a sign entices viewers to “Help Yourself,” a directive that also appears in Weber’s concurrent show at the Cubitt gallery in London. There, however, the sign is on a refrigerator housing mushroom cultures in plastic bottles that viewers can take with them to disseminate. Like the record in New York, the spores function as the literal link between the gallery and the outside world, illustrating Weber’s interest in exploring notions of public and private space. Similarly, the co-mingling of city and country environments suggests an attempt to distort stringent definitions of place.

The free spores are one element in a larger single project that occupies all of Cubitt. Drawing on a childhood memory of mushrooms that could push their way through asphalt, Weber attempts to recreate vegetative anarchy in the gallery by layering densely packed compost scattered with spores underneath a poured tarmac block. In the middle of the square, a small white shed stores the tools of laboratory research, which were used throughout the duration of the exhibition. The show was modeled on a similar structure Weber constructed on a deserted lot in Berlin where he actually lived during the mushroom invasion. In its transgressive use of public space, the earlier project seems more political and aggressive than the London show, which was tempered by the mediating qualities of a fine art setting.

The gallery, itself a rather hut-like space in an obscure cul-de-sac, smelled intensely of the sod and fungus. The ’shrooms were gigantic, literally bursting through the asphalt, creating remarkable bumps, fissures, and cracks as they grew. Doubling in size every 24 hours, curator Emily Pethick mentioned that the staff was constantly clearing the space of hundreds of fungi, a fact that made the blatant distribution of the seemingly benign plant all the more lawless.

Inside the shed were spore drawings—both complete and in process—remarkable for the intensity of their color and the clarity of their line. Photographic and written documentation revealed not only Weber’s interest in scientific research and ecological/biological processes, but also a strong desire to create an on-going dialogue within works, and the realization of social sculptures.

While both projects signal a move towards traditional gallery presentation, they continue Weber’s trend towards combining ephemeral experiences with mnemonic tokens in the form of pictures, sounds, or drawings. It seems clear that action rather than object drives his practice, but, like Christian Jankowski, Weber translates events into representational forms that retain their wit and their political tenor.