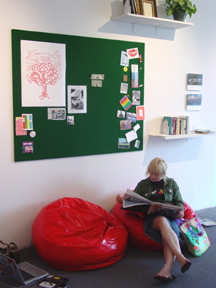 The hot summer day that I visited The Free Library, Lou Reed’s cool voice filled the room, the hip gallery attendant was napping on a beanbag among books, and hanging plants were scattered around the room enjoying the gentle breeze of an industrial fan. It immediately obvious that the objects in this show were not just for contemplation: the viewer was meant to actively participate in the show and go wherever the wind blew.


Behind the collection of books, posters, and publications in the exhibit was a group of graphic designers from the UK, the Netherlands, and North America, including curator Mark Owens, a New York-based artist/designer. Each designer’s practice is conceptually driven and described as using design as something that produces "a more accessible or ‘free’ platform for their ideas." The designers chose the books to be included in the Library as well as created original work for the show.

Sections of the room were delineated by vignettes of seating, books, and objects. I plopped down in a beanbag on the side of the room next to a portable record player, ready with cavernous headphones and a pile of well-selected records. Above me was a small collection of esoteric books with topics reaching from the obscure corners of art, science, and literature. I settled into one of these books and ended up learning a few things about the history of germs.

The compartmentalized spaces and overall aesthetic of the show was inspired by the Acorn School, built in 1973 in New York City. With carpeting, circular seating, and hanging plants, this parent-owned school was the manifestation of the "power to the people" spirit. It offered an alternative to the linoleum floors and rows of bolted down desks, which went hand in hand with a teacher talking at you rather than everyone talking together. Like the Acorn School, The Free Library provided a space more conducive to discussion rather than the lecture format of a traditional gallery set up.

Caught in between the Bedford shopping strip and the bulk of Williamsburg galleries, the location of Riviera allows the show’s allusion to utopian ideas of the cultural revolution of the 1960s and 1970s to slip between the fetishization of this era that is so popular in fashion and design and a display of art/ideas originating from this era. Am I in Urban Outfitters or the "think tank" that the show claims to be?

The show’s stated purpose was to "encourage visitors to the gallery to spend time reading, hanging out, and interacting with one another." The show succeeded in doing this, which not only made for a pleasant visit but also brought back a spirit of do-it-yourself activism that has gotten drowned out of the excessive and empty use of nostalgia in much contemporary art and design.

A Library Alone Is Not a Poets House

E.J. McAdams is a poet and artist, exploring language and mark-making in the urban environment using procedures and improvisation with found and natural materials. He has published five chapbooks, most recently “Middle Voice” from Dusie Kollectiv, and installed Trees Are Alphabets at The Bronx Museum of the Arts.

Deschamps’s interest in the losses and gains through the process of translation illustrated a mode of construction based on altered meanings. Just like a foreign language, the hotel is an abstract location that, through a visual and literary discovery process, becomes a familiar one.