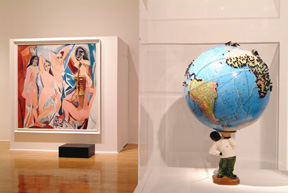 Diving into Fred Wilson’s excursions around the complex relationships between art collections and their institutional display, one cannot help but question the role and ambition of museums. In a small yet spicy retrospective entitled Fred Wilson: Objects and Installations: 1979-2000, organized by the Fine Arts Gallery of the University of Maryland and its Curator Maurice Berger, Wilson introduces his provocative thesis: neatly packaged and openly showcased in public exhibition spaces, too many prejudices of the past remain very much alive today.

While Wilson’s appointment as the U.S. representative to the 50th Venice Biennale in 2003 certainly guarantees the attraction of a larger audience to this traveling exhibition than it would have had a couple of years ago, it is the current unsettling state of the world that makes this show not only relevant but important to see. Though Wilson, a Bronx native of African American and Caribbean descent, has focused extensively on the racial discriminations rooted in his own country, he does not fail to touch on various historical and international evils, which manifest themselves in the colonial rape of one culture by another. After all, the cruelty of stereotypes and the fatal pairing of narrow-mindedness and denial remain universal problems.

Exhibiting Wilson’s skill to speak volumes with simplified visuals, “Mine/Yours” (1995) shows an intriguing juxtaposition of photography and ceramic memorabilia. While the picture on the left depicts a black family early in the twentieth century, the arrangement of figurines on the right closely mirrors the content of the photograph, providing each character with its three-dimensional counterpart. However, the quality of the two family portraits could not be more different. Whereas the photo has captured a proud group of related individuals, the sculptural pendant is nothing but a mocking provocation. Inspired by racist conceptions of African Americans during slavery, each cartoonish saltshaker and decorative porcelain doll—all of which were once popular collectibles—translates into a discriminatory insult. The mother in her best Sunday dress has become an overweight woman with a servant’s apron, bonnet, and exaggerated red lips; the curious young child gazing at the audience with embracing eyes has been turned into a melon-eating cliché. It is always the chosen descriptive vocabulary that will define a glass as half full or empty, or in this case, turn a sacred family document into a belittling farce.

Exploring this concept of differing realities further, the installation “Cabinet Making” (1992) brings together an unlikely group of handcrafted woodwork. Part of Wilson’s elaborate project Mining the Museum: An Installation, it was created for the Maryland Historical Society, Baltimore, and exclusively involved objects from the museum’s permanent collection. In “Cabinet Making” four chairs are turned towards a whipping post. Though devoid of any human presence, this theatrical scene is charged with psychological tension. Facing the cross-shaped torture device, each seat is readily inviting the audience to witness the gruesome spectacle (and comfortably at that!). The arrogance inherent in this harsh contrast between the elegantly designed period furniture and this painful relic of human injustice is heightened by a series of reward notices on the wall. Promising money for the capture of runaway slaves, a note from 1827 announces: “The above reward will be paid on having said servant lodged in any jail in Maryland, so that I can get him.”

Stripped to the bare bones, “Friendly Natives” (1991) features four skeletons, each of which is entombed in an antique display case made of a glass vitrine, velvet lining, and a mahogany support structure. Functioning as transparent sarcophagi that allow the viewer to inspect the physical remains, these elaborate treasure boxes become both altars devoted to science and containers of myth. “Who was this person?” or “What did he/she die of?” might be the most immediate questions, followed by thoughts about age, gender, and—color? Waving off all of the above, Wilson has attached two small index cards to each skeleton, which offer simple human definitions, such as “Someone’s Mother,” “Someone’s Sister,” “Someone’s Father,” “Someone’s Grandfather,” and so on. Without doubt, beneath all flesh, soul, and social circumstance, what all members of the human race will always have in common (besides a similar bone structure) is their link to the larger collective, familial relations that connect individuals: each person is also another’s mother, father, sister, brother, son, or daughter.

One of the most unsettling works in the exhibition, “H RR R and H PE” (1999) has all the dangers of a safely hidden rip tide. Originally part of a group exhibition held at the International Center of Photography, New York in 1999, this work involves sixty-four photographs of the Jewish Diaspora from 1914 to the present. Well-framed and almost entirely covered by mat board, these moving glimpses of the Holocaust and Jewish emigration from Europe and North Africa to Israel remain unrecognizable. Even while looking closely at a quarter-of-an-inch square slice of a photograph, the viewer barely sees more than an abstract pattern. With a ring binder, holding the necessary information for the photographs, Wilson challenges his audience to gain access to the truth through active participation. But, if we choose to narrow our access to reality as drastically as the provided matting, the uncomfortable evidence of human misery will vanish before our eyes.

Less metaphoric is “Addiction Display” (1991), a collection of objects associated with Colombia’s past and present. Set under glass, four replicas of pre-Colombian artifacts are contrasted with thirty carefully labeled articles of cocaine paraphernalia. Adding a headline to this incongruent ensemble, a photograph of a Colombian landscape and its explanatory inscription summarize the schizophrenic condition: “A Pre-Colombian Archaeological site 1500-500 BC and Cocaine Processing site 1991.” Illustrating the tragic downfall of a rich culture caused by its exploitation through Western invasion and intervention, Wilson points out again that life is shaped not by what we make of it, but rather by our choice to preserve or destroy it. For those not just seeking escapism in art, Fred Wilson: Objects and Installations: 1979-2000 provides some engaging food for thought.

Ricardo Wilson’s An Apparent Horizon and Other Stories

Wilson builds fully realized worlds in each story, be it a single paragraph or dozens of pages. The result is a challenging read where race and class are front and center, and they are explored in a way that is both sad and painful, and warm and witty.

This beautiful and well-researched book joins a selection of the artist’s collages with texts by his friend, the late critic William S. Wilson. But the star of this show is Johnson, whose magnificent, uncanny, and sublime collages require little explanation that he himself did not provide in abundance during his self-truncated lifetime.

A group of artists, gallery owners, and museum employees issue a call for museums and art galleries in New York City to close for one day as an act of protest against a war the U.S. is conducting in a faraway country. The Museum of Modern Art, the Whitney Museum and the Jewish Museum, plus many art galleries, comply with this request. Only two major museums decline, The Metropolitan Museum of Art (which does, however, delay the opening of an exhibition for one day) and the Guggenheim Museum, which is then picketed.