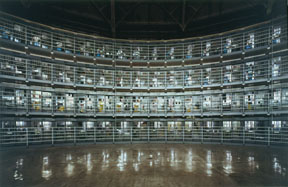 "Nha Trang, Vietnam" is Andreas Gursky at his best. Lady workers weave straw baskets and chairs on the floor of a vast factory. Their scattered presence coheres into a color scheme. The repetitious bland orange of uniform shirts and the sameness of a thousand opaque black ponytails swell to distraction. Long ropes of dried grass scattered on the floor divert and direct the gaze. Looking at "Nha Trang," I have an overwhelming sense of synesthesia: here, I not only see straw, but sense its scratch. I feel as though the picture were constructed like an Anselm Kiefer, with paint and straw shellacked to woodcut and photographic print.


Instead, of course, it is one elegant surface, divided into bands of activity by the black lines of electric lights. These lines are disorienting: they slice through any weaver in their path. The light changes—falsely—in each section. Moreover, these bands flatten out the picture plane despite a space that seems egregiously deep, despite the picture’s violent perspective and the suck of the black columned back to this room.

There is nothing relaxing about this composition, despite its order and the regularity of the frame. Gursky’s horror vacuii prevails. This picture does not look correct at any smaller size. It owns and activates every inch of its nine and a half feet. It is a step forward for Gursky. It combines his superb organizational capacity and his urge towards abstraction with his culturally satisfying tendency to describe international worldviews. At the same time, it is messy, strange, and out of control.

That’s it. There’s nothing else to look at at Matthew Marks. This is Gursky’s first solo show in New York since his major mid-career retrospective at the Museum of Modern Art in 2001. This show is, of course, disappointing. The retrospective revealed all of Gursky’s evolution: over the years, his colors became more saturated, people became less and less the point, and the dimensions of his prints seemed to emphasize his interest in form. The monumental scale of certain prints made sense in the context of an oeuvre that also included smaller prints: size became a choice rather than a rule. When Gursky chose huge, he meant it. His photographs demanded to be considered individually, rather than in the default serial format so common to photography.

The pictures he shows at Matthew Marks seem like the gleanings of the last eight years. They are all over nine feet long, and that works to the detriment of some. "Dusselstrand" (1997), for example, is better online than in person: the print is too large to apprehend the diagonal underbelly of the horizontal stripes or its mesmerizing shifts in tone. "Rimini" (2003) shows infinite rows of beach umbrellas, grouped systematically by color. It is an ironic description of recreational space and a pleasant picture, but ridiculous at this size. "Stateville, Illinois" (2002) is a beautiful, eerie photograph of the inside of a prison, but its composition so precisely mirrors that of "Library," from 1999, that I wonder what it really contributes to Gursky’s process. In fact, the heavy white swell of "Library’s" ceiling and its extended length offer more formal enticements than "Stateville, Illinois," which boasts only certain details: the colors of uniforms through muddy glass, faces warped by the curve of the frame.

The only picture in this show that seems to offer some new structure is "PCF, Paris" (2003). It is constructed like a weave: small panels in a gray scale overlap to make both a checkerboard and a grand wheel of lights and darks. This picture is a pattern, first and last. Looking harder doesn’t make you think about what it is; it makes you see the relationships between the parts, which in effect, is what all great Gurskys do.

From the Threshing Floor

Threshold: the magnitude or intensity that must be exceeded for a certain reaction, phenomenon, result or condition to occur or be manifested.