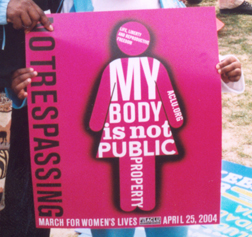 Just prior to the recent, momentous March for Women’s Lives in Washington, DC, the City Council issued an alarming report documenting the impact the attack on abortion rights is having here in New York City. According to the report, "nearly a quarter of New York City hospital emergency rooms are failing women and breaking the law," specifically "by not providing survivors of rape/sexual assault the medication necessary to prevent pregnancy."

"Despite New York City and State laws that require every hospital to provide such patients with emergency contraception [EC]," the report continued, "Women across NYC are being denied access to this safe, effective and essential method to prevent pregnancy after unprotected intercourse or contraceptive failure." The report, entitled Emergency Contraception: Available at an Emergency Room Near You?, was presented by City Council Speaker Gifford Miller, Councilwoman Christine Quinn, Chair of the Committee on Health, Councilman Eric Gioia, Chair of the Committee on Oversight and Investigations, and Councilwoman Eva Moskowitz, on April 21.

"Rape is a very horrific violent act that doesn’t discriminate against race or religion or class," says Carla Goldstein, Vice President of Public Affairs at Planned Parenthood of New York City. "And yet, you can see from that report there’s real discrimination in terms of the healthcare that’s delivered depending on where you live in the city." The report showed that of the 14 Hospitals surveyed in Manhattan, 93% said that they provide EC, while of the 17 Hospitals surveyed in Brooklyn, only 53% said that they provide EC. Goldstein suggested that the report highlights that healthcare disparities are often drawn along racial and class lines. Councilwoman Letitia James agrees that the report is "alarming" and suggests that it shows a disparity in access to health care and perhaps a lack of appropriate education regarding reproductive rights.

The City Council as well as the State Legislature passed laws guaranteeing that hospitals provide EC in 2003. In New York City, Local Law 26 of 2003 requires that survivors of rape and sexual assault who contact a hospital emergency room be informed that emergency contraception is available and given it upon request. Hospitals with city contracts or agreements face a $5,000 penalty if they fail to comply with the law. Similarly, the amended New York State Public Health Law, which went into effect in January 2004, requires hospitals that provide emergency treatment to survivors of rape and sexual assault to inform such patients about EC both verbally and in writing, and to provide EC unless it is refused by the patient.
"We don’t know actually what’s causing them to break the law," says Councilwoman Quinn, "But we’re going to ask them personally in an attempt to find out what the stumbling block is for them, so we can remind them it’s the law and they have to follow it."

Nationwide, Planned Parenthood Federation of America estimates that 25,000 women each year become pregnant as a result of sexual assault. As many as 22,000 of those pregnancies could be prevented by the use of ECPs. In New York State, according to the Family Planning Association of New York, as many as 1,000 rape victims each year have been sent away from emergency rooms in New York without the option of receiving EC on-site. "It’s clearly alarming for us in the State of New York," says Sylvia Henriquez, director of the Brooklyn-headquartered National Latina Institute for Reproductive Health.

"Although it is difficult for anyone to get emergency contraception, it is especially difficult for Spanish-speakers," adds Caricia Catalini, Community Organizer at the Latina Institute. According to Catalini, many women in Latin communities have been victims of sexual violence, but in general they don’t seek treatment in hospitals or press charges because of linguistic and cultural barriers. Furthermore, many Latina women do not have health insurance, and are thus averse to the costly visits to doctor’s offices and emergency rooms that are required to obtain ECPs. (According to the National Council of Women’s Organizations, 37% of the national Latina population is uninsured.) Catalini and Henriquez both emphasize that legalizing over-the-counter ECPs would raise awareness and accessibility in Latina and other low-income communities.

This past February 26, the New York City Council overwhelmingly approved Resolution 92A, which urges the FDA to allow the sale of a brand of ECPs called plan B over the counter. According to the Council’s April report, over-the-counter access to EC would be especially important for victims of sexual assault and rape who do not seek medical attention.

Henriquez, one of the co-organizers of the March for Women’s Lives, remains optimistic in her battle to ensure fundamental rights for Latina women, despite the Bush Administration’s attack on women’s rights and the City Council’s worrying report.

"I think that this march is an indication of the traditional pro-choice movement broadening its message to include reproductive freedom and reproductive justice, which in our definition includes a focus on access and affordability and culturally and linguistically accessible care."