Growing Up with the Brooklyn Outlaws

By Andrew Hodges and Ian Daly

The Taino Tribe motorcycle club is tucked away on a desolate stretch of Flushing Avenue in Bushwick, Brooklyn, behind a series of three unmarked doors in a worn-out red brick townhouse. Two members, Mike and Raymond, are hanging out under a Special Forces banner, absorbed in a game of chess. 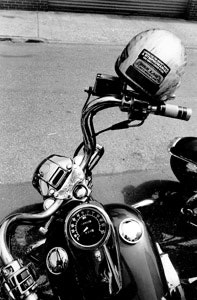 A Minimum Matter of Survival.

Stepping through the bright yellow door and into the cafeteria of Neighbors Together, the first thing you notice are the white Fruit of the Loom T-shirts pinned to one wall above a chalkboard. Messages are scrolled in thick, uneven black marker across the front of the shirts: “Governor Pataki: Help Us in Our Struggle,” “Election Day Is Coming,” and so on.

Just prior to the recent, momentous March for Women’s Lives in Washington, DC, the City Council issued an alarming report documenting the impact the attack on abortion rights is having here in New York City. 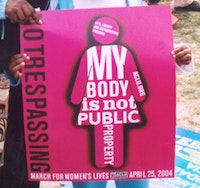 When it comes to taking care of people who need help—small kids or people who are sick—that’s my life. I love it,” says Jennifer Clarke. Before moving to East Flatbush from Jamaica, Clarke asked her brother, already living here, to poke around for jobs in the medical field. He had a friend working as a home health aide, and Clarke (who will, for the record, only state that she “looks to be in her mid-30s”) has been a home health aide since coming here 13 years ago, and now works for All Metro Health Care.

Dear Mr. Ratner and Members of the Forest City Ratner Company Board: I took the liberty of visiting your company’s Website the other day since, as a Brooklyn resident, I’ve been very concerned about the proposed Atlantic Yards development project. I also tried to look up Mr. Ratner’s home address since, having noticed that the Ratner Company was located in the 1 MetroTech Center, I thought Mr. Ratner might also reside in Brooklyn and understand some of the concerns that local residents have about this new project. Sadly, I was not able to find his home address, so I have to assume that he does not live here. If he did, I don’t think he would be proposing to ruin his own neighborhood with irrational development projects.

Givin’ the People What They Want, pt. 1

Developer Bruce Ratner calls New York City Mayor Mike Bloomberg to talk shop. “Mike.” “Yes, Bruce.” “I’ve been thinking about something, Mike.” “What’s that, Bruce.” “Mike, do you really think people want stadiums everywhere?” “Now Bruce, I’m not hearing doubt, am I? Remember, I’m counting on you to take care of the people of Brooklyn.” “Mike, it’s just that people are starting to hate me, that’s all.” “Take it from me, Bruce, that’s ok. I know what it’s like to be hated.” “How’s that, Mike?” “Well, it started when I took away people’s cigarettes. Now, I’ve started firing people who won’t flunk third graders, and my poll numbers spiked. People say I’ve finally found my ‘inner Rudy.’”