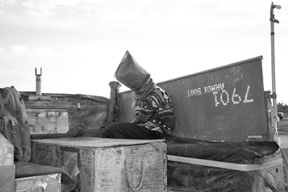 Arrogance, incompetence and racism are becoming the signature features of American military rule in Iraq. Exhibit one: the siege of Falluja, where hundreds have died. Even more are set to die at the hands of U.S. Marines.

Let’s be perfectly clear about the situation: the current uprising in both Sunni and Shia areas of Iraq was provoked by L. Paul Bremer III, the American proconsul in Baghdad. First he shut down al Hawza, the small weekly newspaper (circulation 10,000) of Moktada al Sadr, a radical Shiite cleric. Then Bremer arrested one of Sadr’s top aides and announced that Sadr was also an "outlaw" soon to be jailed. When Sadr’s followers protested peacefully in Fardos Square, U.S. troops opened fire on them and then followed the protesters back to the Shia slum of Thawra, or Sadr City. At the same time, Bremer and the U.S. military vowed spectacular revenge in Falluja because four mercenaries had been killed and mutilated there. As punishment, the Marines attacked Falluja and are now bogged down in bloody fighting on its outskirts.

Had Bremer and general Sanchez played it cool and not provoked the Shia or besieged Falluja, Iraq would probably be limping along as it had been for the previous year. Instead, the country is now falling apart and the U.S. military is committing serious atrocities against civilians.

In January, I spent time in Falluja, Ramadi, Adamyia, and Sadr City, all of which are now battlegrounds. I’ve embedded with the U.S. Military and interviewed cells of resistance fighters. I was with the 82nd Airborne in Falluja, when they came under attack in the area that the Marines are now trying to occupy. From these experiences I have concluded that in Iraq, America is its own worst enemy. Don’t get me wrong, I never supported this war, and I am not trying to offer a better way to colonize Iraq. These comments instead are a political autopsy.

Most Iraqis I met were war-weary and hesitant to fight. They were desperate for jobs—that is, real reconstruction. The resistance was, for most of the last year, a loose and paranoid network of cells only capable of hit-and-run attacks. The Shia and Sunni eyed each other with increasing suspicion. Overall, Iraqis seemed to be patiently tolerating occupation—and they were ambivalent toward the resistance, neither supporting nor condemning it. Many people maintained an unrealistic hope that peaceful methods would allow them to regain real sovereignty. Now, thanks to the arrogance and aggression of the occupiers, all that has changed. Every new U.S. tactic seems more cruel and insane than the last. 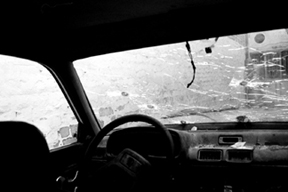 Consider what is happening in Falluja. The disparate resistance cells are engaged in a massive recruiting drive and military reorganization. As they fight the Marines, these cells are in the street, clearly linking up, re-organizing and launching a large-scale defense of their city.

As for new recruits, the resistance owes much to the U.S. Marine Corps, which is halting all refugee convoys, allowing the women, children and elderly to proceed, while turning back all "fighting age" men! What happens to these guys? They head back into an urban battleground of alleyways, rooftops and side streets, where they are no doubt joining the insurgents who battle to defend the city.

Even U.S. tools like Adnan Pachachi, a former foreign minister and a member of the U.S.-appointed Iraqi Governing Council, are condemning the Americans. Pachachi has called the siege of Falluja "unacceptable and illegal." To alienate the likes of Pachachi takes real effort.

In Baghdad, Sunni and Shia are united, praying and fighting together. Shia aid convoys are attempting to bring food, blood and fighting age men to Falluja. Elsewhere in Iraq, U.S. forces slowly try to retake Shia strongholds. These assaults will kill many civilians and harden the support of a military opposition to the U.S..

Along with Bremer’s provocations, this new state of affairs can be blamed on the lack of any meaningful reconstruction. The stalled political and economic efforts are the result of two interconnected things: the pro-market ideological delusions of Bremer’s staff and the wholesale private sector fraud these delusions foster.

To win hearts and minds America needs to turn on the lights, provide clean water, give people jobs and impose law and order. But hardly any of this has happened because Bush administration-connected firms like Halliburton and Bechtel have stolen the vast majority of the money allocated for such tasks. 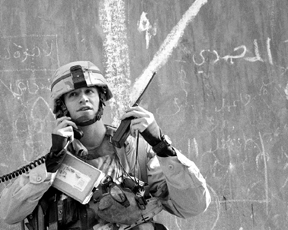 Recall the revelations of Halliburton’s over-billing the military for food and fuel. Halliburton and its subsidiary Kellogg, Brown and Root both voluntarily returned millions of dollars while the Pentagon has opened criminal investigations. But these scandals are just the tip of the iceberg. Overall, $11.2 billion in contracts have been awarded in non-competitive bids to U.S. firms.

As journalist and former investment banker Nomi Prins found, there is in fact no one agency even keeping track of this reconstruction. Instead, "a slew of separate entities" from "the State Department, Treasury Department, multiple Defense Department divisions, and international organizations like the World Bank and United Nations" are all keeping their own books—or sort of. "Each is privy to receiving and responsible for disclosing only a subset of information," Prins wrote in Newsday.

When one U.S. journalist went to various reconstruction project sites he found that many projects that had allegedly been "rebuilt" had in reality barely been touched. One "repaired" school he saw was overflowing with raw sewage. When I visited Ramadi and Falluja in January, both suffered inadequate water and electricity and people were very angry about these shortages. Power plants, telephone exchanges and sewage systems all remain looted and bombed out. According to the NGO CorpWatch, of Halliburton’s initial $2.2 billion in contracts, only about 10% has been spent on meeting community needs. The rest was simply ripped off. 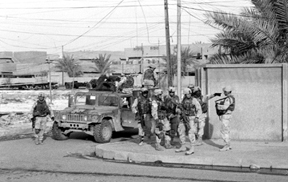 In past counterinsurgency efforts, lack of real reform—that is lack of real reconstruction—has caused militaries to use greater and greater levels of terror. To separate what Mao Zedong called the "fish" of guerrilla from the "sea" of the people, counter-insurgency forces use aerial bombardment, defoliation, forced relocation, torture and lots of killing. This was the pattern in Vietnam, El Salvador, and Guatemala and is still the case in Columbia.

We now see that sort of hyper-violent "plan B" emerging in Falluja, where the American planes have bombed mosques as well as used AC 130 gunships to concentrate fire into densely packed civilian neighborhoods.

Will this sort of barbarism "work"; will it "pacify" Iraq? Here it is worth listening to none other than Henry Kissinger, who said of the Vietnam War: "We fought a military war; our opponents fought a political one. We sought physical attrition; our opponents aimed for our psychological exhaustion. In the process, we lost sight of one of the cardinal maxims of guerrilla warfare: the guerrilla wins if he does not lose. The conventional army loses if it does not win."