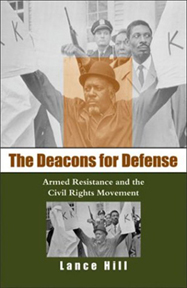 The realpolitik of the civil rights era is probably the least understood aspect of that halcyon period. Awash as it was with the moral high tone of redemptive
suffering, of marching blacks and whites, and of America finally living up to its creed of equality and justice for all, it’s no small wonder that the era’s actual policies and practices are not yet fully understood. Today, Dr. King is even the poster boy for conservative colorblind policies; former lieutenants of "De Lawd" (as SNCC activists called King) now use his legacy to advance self-aggrandizing schemes like the Wall Street Project.

What is never openly recognized, much less ever really admitted, is that the very successes of that period—blacks winning the right to vote and the ability to go about their lives secure from racist violence—also ended up circumventing black popular mobilization. Presently, there is a dearth of effective black organizing. Blacks are unrelentingly encouraged to vote and participate as a mass appendage to the Democratic wing of the Property Party. Exactly how African Americans willingly demobilized themselves and the consequences of this process are seldom examined. Explored even less is the idea that working class blacks have needs different from those of black middle-class leadership.

The University of North Carolina’s latest book on the civil rights era, The Deacons for Defense: Armed Resistance and the Civil Rights Era, written by Lance Hill, an adjunct professor of history at Tulane University, opens a window into some of these issues. It cannot be disputed that what made the civil rights movement a high-toned moral project, and one particularly attractive to the northern liberals whom black leaders sought as allies, was its principled stand on nonviolence. Organizations such as the Southern Christian Leadership Conference (SCLC), Student Non-violent Coordinating Committee (SNCC), and the Congress of Racial Equality (CORE) were knee-deep in the Gandhian philosophy of nonviolent violent resistance and redemptive love. After all, most of the leadership tiers of those organizations were composed of middle class blacks who were educated and worldly.

Yet the movement was also a mass phenomenon that, in fact, needed the masses, meaning working-class black people: domestics, sharecroppers and mill workers, as well as schoolteachers, ministers, and funeral parlor owners. The needs and views of the southern black working class were often different from those of middle-class civil rights organizations, however. By the time the Deacons for Defense came on the scene in 1964, the civil rights movement had been in existence for nearly ten years and blacks were becoming disenchanted with the pacifistic, legalistic and legislative strategies of national organizations like the NAACP and CORE. The Deacons were a Deep South organization that arose in the nigger-hating environment of Louisiana and Mississippi, within two adjacent congressional districts that were often seen as a Ku Klux Klan nation. The group’s mission was to do the politically unacceptable—or, in Hill’s words, to challenge the "unwritten racial code of conduct in the South [that] forbade blacks from using collective forms of self-defense."

Hill’s book, like any good scholarly endeavor, works on multiple levels. In particular, it examines the class differences that permeated the civil rights movement, specifically concerning the allegiance to nonviolence as a philosophy or tactic. Nonviolence contradicted the code of masculine conduct that black men shared as leaders and protectors of their families and communities. Getting black men to participate in the movement was difficult due to some of the civil rights movement’s strategies and tactics, especially when it came to treating beat-downs as redemptive suffering.

Many African Americans, men in particular, refused to participate in the era’s nonviolent protests because they believed that passive resistance to white violence simply reproduced the same degrading rituals of domination and submission that suffused the master/slave relationship. The response of some black men, Hill argues, was thus predicated on notions of manhood and honor—in other words, that a man has to do what a man has to do. Bound by the "notions of masculine honor," Hill writes, "black men [had] much more to lose than women and children: what was at stake was their pride, manhood, and very likely, their life." It was on such an issue that the Nation of Islam, via Malcolm X, castigated the pacific orientation of the civil rights movement. After all, real men don’t accept a whipping. Instead they protect their loved ones and communities from receiving one. In the South, however, such defensive activity had always been the privilege of white males.

The Deacons for Defense came into existence in Jonesboro, Louisiana, in the parish (county) of Jackson. The region was a hard-scrabble environment that was less conducive to farming and more suited to lumber millwork and manufacturing. CORE became active in the area in 1964, initially assisting local high school students in a voter registration drive. CORE soon split its activities into voter registration and direct action against other segregationist barriers—fighting black access to the public library and the public swimming pool, among other places. The Deacons started as an amalgam of cashiered black police officers, led by Frederick Douglas Kirkpatrick, along with other local residents, led by Earnest "Chilly Willy" Thomas, who had informally begun a self-defense group to protect the Jonesboro headquarters of CORE, a place called "Freedom House."

The Deacons's formative moment came when Thomas and others confronted Police Chief Adrian Peevey at his home after Peevey had escorted a Klan convoy through Jonesboro’s black quarter. Peevey was told in no uncertain terms that such a provocation wouldn’t be allowed to happen again—if so, the Deacons warned, "there was going to be some killing going on." The convoy itself was the beginning of a night of terror in the county by the Klan. Within a few days, a determined group of approximately twenty black men met at the union hall to discuss forming a self-defense group. The meeting brought together the two groups that had been active in armed defense: Kirkpatrick’s black police squad and Thomas’s informal defense group. The groups shared overlapping membership as well as essentially the same goal of protecting the black community from white violence.

The Deacons for the most part operated as an under-the-radar organization. They didn’t announce themselves, yet neither were they entirely invisible. The very fact that they were known to be around and solely working in a defensive position still frightened whites. However, their visibility was heightened when the New York Times ran a "sympathetic" article about them on February 21, 1965—coincidentally the very same day that Malcolm X, one of the foremost exponents of black self-defense, was assassinated. Despite the place of nonviolence at the center of the larger civil rights movement, self-defense had always been a contentious though mostly underground issue. Robert Williams, the head of the local NAACP chapter in Monroe, North Carolina, had been dismissed from the organization when he advocated and then took up self-defense against racist violence. Williams later chronicled the struggle that eventually led him on an odyssey outside of the United States in his 1962 classic, Negroes with Guns.

While the Deacons came to existence in Jonesboro, it was Bogalusa, home of their second chapter, which gave rise to the legend of the Deacons as no-nonsense black folk who had tired of being suffering Negroes. That city was the capital of the Klan nation in Louisiana and was fiercely resisting desegregation. What made the local Klan intractable was that it had a history of being organized by a white working class that was insistent in keeping its caste privilege, precisely as the local economy was shifting and new opportunities were being opened to blacks. CORE had found the city to be the perfect place to set up shop and when it sent to organizers to help do so, they were greeted by organized white resistance, in the form of "wrecking crews" that foreclosed any civil rights desegregation and intimidated white moderates.

Understanding that their efforts to organize would be limited, and fearing that their staff would be murdered or maimed, the CORE organizers called on the Jonesboro Deacons. Thomas and Kirkpatrick came and helped the local blacks that had protected the organizers to set up the Bogalusa chapter. In keeping with the working-class character of the group, Charles Sims, a somewhat disreputable but salt-of-the-earth type, became president; Sam Barnes, an ex-convict with twelve arrests, was vice president. As Hill explains, by selecting these men—one a veteran of the military, the other recently assaulted by the Klan—the local community was being represented in the Deacons by "the legendary ‘bad nigger’ feared by whites and blacks. Their reputation for violence served them well in their confrontations with the Ku Klux Klan."

Given the level of violence that had occurred in Bogalusa, one wonders why it is less well-known than other confrontations with southern intransigence. In Birmingham four little black girls were killed in the infamous church bombing, and in Selma, blacks suffered on the Edmund Pettus Bridge. In Bogalusa, however, a Deacon shot a white attacker, which discouraged the white population from joining further Klan demonstrations and violence. The spectacle of righteous black suffering, perhaps, was preferred by civil rights leaders (including King) and their white liberal supporters. From this perspective, black self-assertion and self-defense set a bad example.

This is a fascinating account of an unrecognized chapter in civil rights history, but at its heart is more than just the story of how some communities resorted to violence. It also shows the imperative of working-class political mobilization being organized by working class people themselves. While the men and women who advanced civil rights through nonviolence should be lauded, those individuals who decided to engage in self-defense in order to protect the right to organize and to be free of racial terrorism deserve credit, too. The trouble, however, is that American society generally becomes more than uncomfortable when the downtrodden decide to take matters into their own hands and then have the audacity to succeed. The Deacons for Defense is a welcome challenge to the nonviolent mythology and orthodoxy that serve as the basis of civil rights history’s master narrative. Hill’s work blows the lid off that cover story, persuasively arguing that the "will to coerce change rather than win consent from one’s enemies" is that era’s real legacy.

Kimberly King Parsons’s first book, Black Light, is aptly titled. Each story reflects light out of darkness. Equally, these stories find rot and provocative weirdness in the well-lit subdivisions of Texan America—middle-class parents stand at one or two removes from reality; hotels become heavens to the down-at-heel; children bully and are bullied and proceed by means of fictions.

Rehan Ansari sat down with Rob Fields, Executive Director, and Eboni Banks, Development Director (TBC) of Weeksville Heritage Center in Brooklyn to discuss Weeksville’s legacy as an intentional community, the community surrounding this neighborhood nonprofit, social justice, and their forthcoming program of exhibitions.

GEDI SIBONY:
The King and the Corpse

The King and the Corpse is a room-within-a-room and fills the main gallery to such an extent—from floor-to-ceiling with a walk-able, but not too capacious path around—that it’s impossible to get far enough away from the sculpture to gauge its true nature as a structure. It’s all sides and angles, but no sense of a whole.

Will Corwin write about the Helen Frankenthaler Foundation and how it supports emerging artists while maintaining the legacy of its founder.