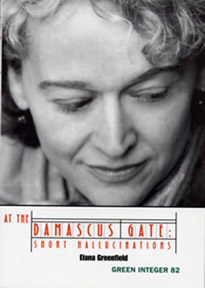 The first book-length work by Elana Greenfield, author of several plays and Acting Director of the Arts in Context at the New School, At the Damascus Gate gathers together 12 stories, dramaticules, and prose poems. One of the book’s strengths is that it’s not always easy to tell which is which—the stories sometimes read like dramatic monologues (not unlike A.B. West’s Wakenight Emporium) and some of the dramatic pieces are closer to the written philosophical dialogues of writers ranging from Plato to Diderot and De Sade. The logic of both stories and dramaticules are not dissimilar to that of prose poems, with leaps at times being unexpected, moving almost more as a sequence of thought than as a progressive unrolling of narrative.

As suggested by the book’s title, which refers to the triple gated entrance to the Old City of Jerusalem, these are pieces about connections between old and new, exchanges between inside and out. A common thread is the importance of voice, and the voice as a palpable, resonant, eccentric entity. As one of the two epigraphs suggests (this one from Jane Austen, the other is from Borges) “You sink your voice, but I can distinguish the tones of that voice when they would be lost on others.” It is hard not to feel that each of these pieces is, in a very real sense, an utterance, and Greenfield’s care with rhythm quickly generates not only a sense of personality but a series of cadences that makes the best of these pieces feel audibly textured. Bits and pieces of quoted material, hints of religious rituals and scriptural knowledge, give the feeling of a variegated text, one in which no voice is unified. These are pieces that want to be spoken aloud. It is hardly a coincidence that the opening of the text proper begins with the words “Keep talking.”

The better moments include the dialogue (or rather augmented monologue) “Possessed by a Demon,” in which a woman tells a story about the first time she saw the devil, the devil’s speech offered to us by a second woman, the two switching roles (and stories) halfway through. “Desire,” a radio play, brings together a woman’s externalized memories of childhood with her dreams of flight and of an angel/stewardesses, the effect being oddly and quite wonderfully disjunctive, each becoming wrapped in the other. In “The Soldier’s Dream,” a man named Lynol lies unconscious on the floor of a helicopter, dreaming of an unknown woman and her daughters in a harbor “city filled with his children who were skinny and whom he did not know.”

Lynol reappears as a minor character in “Neutrino Blues” who thinks he’s been paralyzed ever since he was a child. “It just seemed like I was moving because I was always getting stuck in different positions. I live in hell.” The rest of the story circles around Fred Tedd, a singer trying to get back with his girlfriend Rita. In “The Voice of the Biographer” a woman has chosen an animal to speak her monologue to, based on his resemblance to Harold Lloyd. The “Premonition” reinterprets the Annunciation as a moment of dread, with the Virgin Mary declaring “What is more terrible than for a mother to know the life of her child before he is born.”

These are quirky pieces, often funny, sometimes shading subtly into darker locales. At the Damascus Gate: Short Hallucinations is a marvelous trip, and is an impressive and quite original debut.

BRIAN EVENSON is the author of ten books of fiction, most recently the limited edition novella Baby Leg. He has translated work by Christian Gailly, Jean Frémon, Claro, Jacques Jouet, Eric Chevillard, Antoine Volodine, and others. He is the recipient of three O. Henry Prizes as well as an NEA fellowship.

The Foundation for Contemporary Arts

Charlotte Kent profiles the Foundation for Contemporary Arts and finds the the venerable institution as nimble and necessary as ever.