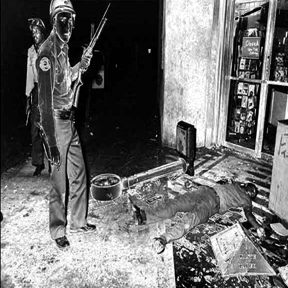 Taking the form of an abstract African-American studies course, Rico Gatson’s History Lessons/Clandestine attempts to trace and rehash segments of twentieth-century American history that were particularly crucial to African Americans in a four-part video and several paintings, drawings, and an architectural structure. Mid-century American politicians used the Cold War to present the nation as freedom fighters, protecting the notion of private property and consumer rights across the free (non-Communist) world, but did that really do anything for America’s blacks? The urban unrest and violence of the 1970s suggests that it didn’t. The civil rights movement supposedly granted American blacks freedom from racial discrimination, so what about white flight, the Watts riots, and Rodney King? This tension between how America likes to think about its own history, and what the effects of white America’s treatment of black America really resulted in, is what Gatson’s getting at here.

"History Lessons" (2004), a four-screen projection (same thing on every screen) complimented by a cluster of four television sets facing north, south, east, and west (showing the same images as the larger projections) is the centerpiece of the show. The 10-minute video initially seems like a color-saturated Brakhage rip-off, with shapes and forms dispersing throughout the screen in kaleidoscopic fashion. As your eyes adjust, it becomes clear the shapes are actually soldiers bursting through the Technicolor in search of something to conquer. Then the screen goes blank (black, actually—then white), followed by images of a dopey black man raising an axe over his head, only to have it pathetically droop behind his head like a limp phallus—the quintessential sexualized yet marginalized Other. Gatson’s source material comes from American films: in the two aforementioned cases from the 1915 silent film Birth of a Nation, and from an unnamed racist talkie, respectively. A music video-type segment juxtaposing a Bob Dylan song about the murder of Medgar Evers with cartoon-y imagery follows. Then a gorgeous and unnerving barrage of images from the Watts riots.

What’s really going on in "History Lessons" is the abstraction of source material—sometimes to the point of pure pattern—to achieve a type of distance or separation from the content through form. Gatson’s kaleidoscopic manipulations of the films are almost always beautiful, which is unsettling because they are disturbing, rapid-fire images of race riots. The tension between the ambiguously threatening images, the pulsating percussive music, and the colorful beauty of some of this piece just feels right.

In the adjacent room, the Clandestine part of Gatson’s exhibition presents work that is representative of the white fraternities and exclusionary practices that undermined black dignity, personhood, and political power throughout the twentieth century and long, long before that. Most of the pieces are rather minimal, black-and-white or white-on-white paintings or drawings, mostly circles and mandalas. While the press release argues that this body of Gatson’s work stands as metaphor for "the power of symbols to enforce secrecy and fraternity," the manner in which it critiques American race relations doesn’t have the nuance, poignancy, or humor of William Pope.L’s similarly inspired work.

It’s clear both from this exhibition, and recent exhibitions, that video work is Gatson’s strength. In the case of "History Lessons," it seems especially important to question how and why the form of the video advances its content. Firstly, why the multiple projections? It works nicely in the Watts segment when the pulsating images seem to jump right out of the wall at you from all sides. But aside from this one brief portion of the video, the four projections plus four TV screens feels like a transparent attempt to echo a current video art trend. Gatson’s manipulation of primary source material, though, is supremely slick—the viewer is assaulted and terrorized by images from a nation’s racist past, yet simultaneously soothed by colorful stylization. "History Lessons" exists within an art world loophole—pure beauty mixed with content-heavy visual information, each engaged with different faces of America—achingley gorgeous for some, achingly painful for others.

Rico Gatson and Baseera Khan: Free to Be

The exhibition is a bold curatorial collaboration: Gatson and Khan shine both individually and together at Jenkins Johnson Projects, a Prospect Heights art space connected to the community around it and highlighting artists of color.

Jenny Snider: A selection of paintings, drawings and sculpture, 1970 to the present

Jenny Snider is a fiercely independent artist who is deeply steeped in film culture, which has inspired her way of viewing her own life and times as inseparable from political history and the lives of the cultural figures and film makers whom she admires. As Snider said in a recent gallery talk, her work has never been based on “what was in the galleries,” which is a way of noting her outlier status in the art world.