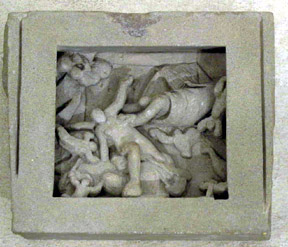 Painters are known to become obsessed by sculpture and sculptors may admire painterly virtuosity, but it is rare that a sculptor’s admiration for painting compels her to capture the spaces and the forms within it. In deep reliefs that fit snugly into the wall and are aligned with it, Natalie Charkow Hollander offers an unusual and modernist interpretation of the old masters with a sense of reverence and ambition. In these works, Charkow Hollander first asserts the walls’ planar surface, then creates miniature interpretative carvings based on compositions by such artists as Titian, Poussin, Matisse, and Piero della Franscesca. Carved in limestone and marble, and molded in clay and plaster, they are often arranged serially and stacked in boxed compartments behind the frame. In one series, she carves single tableaus of pastoral themes, and in another she represents caves, including "Plato’s Cave."

Orpheus, Ariadne, Narcissus at his fountain, the huntress Diana, Vulcan at the Forge, the Flagellation of Christ, and Matisse’s idyllic nudes are just some of the gods and goddesses Charkow Hollander recreates. Her aesthetic approach to this subject matter engages a twentieth-century feeling of dislocation from the classical world. Moreover, while it overcomes its quest to reject academic art, it includes distance in order to re-imagine that classical art had once been alive, and to regain those personifications which have been lost. Like other modernists, meaning for Charkow Hollander takes place in pictorial problems about shape and spirit, and this makes her inclusive obsession with Matisse relevant. But like Joseph Cornell, Charkow Hollander creates box-like formats, where visions of lost magical worlds reside. The overall effect of her work is a dual sense of miniaturization and of encyclopedic multiplicity, with a sense of renewal through the means of formal conversion and reduction. As a group, her work creates a richness through the purified and monochromatic substance of stone that contrasts with the richness of color in her classical models.

The satisfactions of Charkow Hollander’s awkwardly charming multiple figured compositions often resides in her exploration of deeply cut tableaus where shadows surround and support a wide range of rhythmic variety, and the slightly differing figural proportions. The variations of rough cutting and velvety smoothness that alternate around volumes and against planes further enhance the initial impression that her endeavor is an especially attentive one. Yet some of the most sensitive carving resides in the single curved tableaus where she explores shallow relief, framed under lyrically curved prosceniums.

In her series on Plato’s Cave, Charkow Hollander engages the idea of loss more thematically. The caves in Plato’s allegory were inhabited by people who were chained to its walls and unable to turn or move. Prisoners of their darkened surroundings, they watched puppeteers stage puppet shows, yet could only see the puppets’ shadows on the cave walls. Plato was demonstrating his theory of original forms, and of humanity’s reluctance to experience real objects. If led into the light, his prisoners were blinded by its force. Charkow Hollander relocates us behind several caves, one step further removed from identifying with their inhabitants mesmerized by the flattened walls that she lovingly carves, but which block our sight. In general, shadow and shade play a great role in her depictions, as in other tableaus, like "Garden Party," which take place underneath great shade trees.

The contours of what constitutes ambition have so changed over the last few decades that Charkow Hollander’s modernist project of translation becomes historical. The secrets and mysteries of earlier epochs, like archaeological finds, lay in wait to be rediscovered.

A selection of virtual theater spaces to gather in

In this time of actual theater closures, virtual theater spaces are burgeoning. Following is a curated list of live theater programming by top NYC innovators, now available for your at-home viewing pleasure and participation.