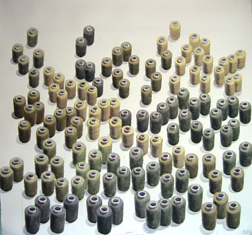 Los Carpinteros’s recent New York exhibition, paradoxically entitled Downtown while inhabiting a prominent midtown location, succeeds in further feeding the buzz around this popular artist group. Though having enjoyed the support of New York’s museum curators for years—they participated in projects at The New Museum, P.S. 1, Museum of Modern Art, and El Museo del Barrio—the show at Anthony Grant marked Los Carpinteros’s local gallery solo debut. Whereas some might argue that it seems plausible that a Cuban art collective should make its first international splash through the intellectual plateau of the museum rather than the capitalist art market, the days of a low commercial profile are over. Unsurprisingly, the prices for the few available works are climbing steadily.

Originally made up of Alexandre Arrechea (born in 1970), Marco Castillo, (born in 1971), and Dagoberto Rodríguez (born in 1969), Los Carpinteros was formed at the Instituto Superior de Arte in Havana, where all three artists studied until 1994. After working and gaining substantial attention as a dynamic trio for almost a decade, the group’s configuration was significantly altered when Arrechea split early last year. However, looking at Downtown, an exhibition that primarily includes works from 2003, it seems that not much has changed. By continuing their elaborative focus on building structures and construction materials—themes that have been significantly inspired by the decaying infrastructure of the artists’ home country—Castillo and Rodríguez reconfirm formerly established aesthetics. Devoid of any human presence, the radiant, large-scale watercolors grant center stage to generally overlooked marvels, such as concrete blocks, drainages, and blown-up water drops on parquet floors. Favoring a palette that brings antique frescoes to mind, Los Carpinteros transform the mundane into poetic metaphors of labor and progress. As accentuated by the name of the ensemble’s symbolic disguise ("The Carpenters" pays homage to workers’ guilds and trades), the idea of collective organization becomes a predominant structural device in installations, sculptures, and drawings alike.

Even though the works on paper originated in the eclectic brainstorming process that precedes any of the group’s three-dimensional projects, they are far from being mere studies. Fusing illustration with the analytical perspectives of technical drafts, each work reveals an extraordinary sensibility for simplified form and translucent color. In "Rodapies" a row of terracotta shingles is portrayed with an unusual elegance. Leaning against a wall as if waiting in line expectantly, each object is arranged on a dominant diagonal that divides the composition just below its gravitational center. The strong graphic quality of the work is loosened by delicate gestural marks caused by a few drips of watercolor, as well as handwritten titles that label each drawing on its surface. The idea of grouping objects in order to create abstract narratives is pushed further in "Camuflaje," where numerous yarn spools are assembled into a surreal battalion. Carefully rendered in green-grays and brown-ochres that are inseparable from associations of international military fashions, the formerly harmless still life suddenly provokes a sense of unexpected tension. One can only imagine the chaos this setting could inspire if each roll began to unwind itself and give up its allocated position.

Shedding light on the aftermath of enforced pressure, "Concreto Roto" exposes several shattered concrete blocks. With their multiple cracks forming abstracted spirals, each object’s natural sturdiness has been eliminated. Suggesting the physical properties of glass rather than the solid mixture of gravel, cement, and sand, each block is rendered with transparent washes of subdued green. The concept of assigning reverse characteristics to basic building materials reaches new proportions in the exhibition’s sculptural selection. Installed in the gallery’s main room, four well-crafted cedar plywood constructions manifest as both oversized architectural models and surreal furniture pieces. Inspired by urban living, and particularly Havana and Miami cityscapes, each work houses manifold functional drawers that animate the sculpture’s polished surface. Presenting the functional role of housing with a literal twist, these miniature skyscrapers and ideas for city multiplexes become resourceful containers that archive progressive thought—the traces of a metropolitan future.

As I write, the nonagenarian artist Alex Katz, long a mainstay of downtown painting, is involved into two major shows: the one he has curated at Peter Freeman’s gallery and the other is an extraordinary show of recent work at Gavin Brown’s Enterprise in Harlem. The first exhibition establishes him, very quickly, as a curator of repute, while the second makes it clear that Katz is moving into a territory wholly his own, particularly in the wonderful scenic studies that pass on, completely successfully, his love of nature.

A young artist full of admiration for Mark Rothko and abstraction in general is unsatisfied with her own paintings because they don’t seem to address the pressing problems in the world around her.