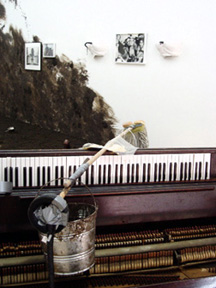 Feminism hasn’t looked this good in a decade. Indigestible Correctness, a pair of concurrent exhibitions at Participant Inc., and Kenny Schacter/ROVE, is a gutsy and visceral curatorial exercise. Curators Rita Ackerman and Lizzi Bougatsos create a set of shows that are as much about display art as an attitude, starting with the self-consciously bad, fragmentary poem of a press release. Their statement is an analog for the show, not merely an obligatory description. Each exhibition is a dialectic montage of works that acquire and re-acquire meaning through the relationships that develop in between them. The exhibits are hung differently, emphasizing the curators’ feminist intervention, unfortunately at the expense of Part II at Kenny Schacter/ROVE.

Part I, at Participant Inc., functions as both an exhibit of individual works and an organic whole, creating an engaging narrative of shifting identities, individuating the show from its fraternal twin at ROVE. Angelblood’s installation, "Desperate Final Stature" (2004), activates the entire space and subsumes the work of the other artists into a grand, ramshackle vision of sexual and gender identity. The rest of the works in the show are collisions of difference between masculine and feminine, neither one dominating the discourse. The overt emphasis on the body and sexuality that the show exudes makes it all seem like a conceptual orgy. Lutz Bacher’s bad pin-up girl "Gentleman Callers (panther)" (1993) hovers above Robin Graubard’s darkly beautiful "The Doll Hospital" (1994) against the soiled wall, a giant smear of dirt that runs across two walls and the floor to a kind of piano plow. Louise Bourgeois’s 1970 "Rabbit" hangs near the ceiling, a muddy looking reminder of mortality. Richard Kern’s photo "Japanne tied up" (1986) is hung with Robin Graubar’s "X-Box Death Squad" (1992) and "Lost" (1994), imparting S&M, violence, terror, and fame into the psychosexual narrative. This one section of the show, with its majestic punctuation by Angelblood’s piano thing bent on "messing shit up," is brilliant.

The other compelling montage is a corner of photos by Katja Rawhles and Robin Graubard along with a Richard Prince sculpture that captures the themes of the show— violence, sex, and power. Rawhles’s female protagonist stares out at the viewer while suggestively interacting with phallic objects near Graubard’s photos of a nude cowboy, an angry boy, and armed men. Richard Prince’s female bust with a plastic bread fastener necklace "Untitled (necklace)" (2001-02) locates the site of the struggle between masculine and feminine identities in our desire driven consumer culture. Alone, these works would be at best odd portraits and didactic feminism, but together they create a critical intervention.

Part II, at Kenny Schacter/ROVE, is a different exhibit, although the content and the theme of the works are similar. The works are hung farther apart, denying the kind of dialogue, or more appropriately, the intercourse, that occurs between the works in Part I. Kembra Pfaler’s installation of photos from the Wall of Vagina series, boogie boards, and personal objects is a self-contained version of the montage strategy that Ackerman and Bougatsos employ at Participant, Inc. It’s unfortunate that the works are isolated, because it emphasizes the formal over the interplay of meaning between them. This simultaneously reduces the curatorial intervention in Part II, while making its presence in Part I more apparent. This may simply be a result of space issues, but it demonstrates how the meaning of an object is not a fixed thing independent of context. It also places more weight on the individual works, which isn’t the real strength of the show at all.

Part II isn’t a brilliant statement: It is an interesting and uneven collection of works that echo the themes in Part I. The most curious entries in the show are Christopher Wool’s "brown, untitled (P432)" (2003) and "black, untitled, (p436)" (2000). They are similar to Marlene McCarty’s "Untitled (SLASH)" (1993) included in Part I, which is one of the few works preoccupied with almost purely formal questions of representation. Wool’s silk-screens mimic the gestures of abstract expressionism, while McCarty’s heat transfer parodies geometric abstraction. Along with Jeff Elrod’s tape painting, "Fallout" (2003), they stand out from the rest of the overwhelming narrative of sexual identity that finds a unique expression in Pfaler’s personal, post-feminist altar to her seventies inspired "vamp" character.

Part II is best viewed as a collection of clues to the curators’ vision, from Picaba’s early self-reflexive painting of the artist holding a painting of a nude, "Montparnasse" (1940-41) to Inez van Lamsweeerde and Vinoodh Matadin’s meticulously constructed picture of female goth sexuality in "Guinivere Descending a Staircase" (2000). The immaculate C-print is a modern reinterpretation of "classical" beauty, and though it clearly objectifies the female subject, its inclusion is a provocative act of political and ideological incorrectness by Ackerman and Bougatsos. They understand art’s ability to challenge the dominant culture, which has become at once intolerably correct and reactionary. As art becomes a "profession" with formal equations for success, it also grows boring, cold, and superficial. The art world’s conservative posturing is sad in what are becoming desperate times for progressive politics and expression. What Indigestible Correctness does beautifully is to make the argument that feminism isn’t merely theory, but a way of challenging cultural hegemony. In Part I, the curators have imbued every work with a sense of urgency and life that every other major show this season, from the Whitney Biennial to Working in Brooklyn, has sorely lacked.

Tune in on November 16th at 7pm for a livestream of our panel discussion, moderated by Jo Melvin

Two recent books by a pair of lawyer/journalists attempt to help the general public understand our convoluted state-specific system of voting, the barriers to real democratic voice, and what we need to do to increase voter participation. They are both useful almanacs for how voting works, how to actually vote, and the barriers placed inhibiting participation.

Unholding and other exhibitions of Native American art

On November 16, 2017, an underground section of the Keystone Pipeline in northeastern South Dakota spilled over 200,000 gallons of oil. As part of the same pipeline network, the Dakota Access Pipeline had been deemed too hazardous to locate near the local water supply of Bismarck, North Dakota, and so was rerouted beneath the Missouri River upstream from the Standing Rock Sioux Reservation.

Historically the professional art world has depreciated motherhood—forcing artists to choose between careers and motherhood or hide their status as mothers lest their work be dismissed1—but a new wave of exhibitions and online communities over the last five years or so has been challenging this.