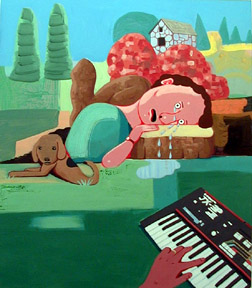 "According to the artist’s bio, he’ll turn fifty next year. You’d think Mr. Humphrey would start acting his age already." Thus ends a review by Mario Naves that appeared in the New York Observer regarding David Humphrey’s current exhibition at Brent Sikkema. He did, however, spell his name right. In response I can imagine Mr. Humphrey replying with something like, "Not bloody likely, mate."

In the nearly twenty years that I’ve been watching the progression of Humphrey’s work, I can’t help but think that he’s due for a breakout season. A cover article in November’s Art in America by Raphael Rubenstein featured Humphrey along with seven other locals as "painters…who have the ability to hold the viewer’s attention…for a substantial amount of time." His move from a blue chip 57th Street gallery to a young Chelsea dealer was a big gamble for a mid-career artist. This edgier space seems to be willing to let the artist’s "freak flag fly." Finally we’re getting a chance to see the sculptural work in depth, a branch of his pursuit that we haven’t seen often in the galleries before. Now don’t get me wrong, much of the essence of the work is a sense of critique, a critique of his own middle-class upbringing and a critique of current trendy fashions in the Manhattan art scene. There is a fine line between an artist who follows a particular party line, and one who is able to identify and incorporate those devices and stylistic mannerisms, and through subversion, use them for their own satirical purposes. 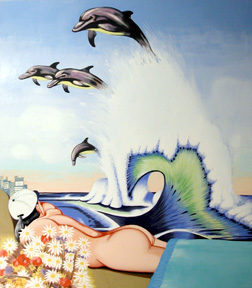 White and whiteness are a common theme in this group of work. Whether it is the whiteness of a snowy landscape, the whiteness of foam on a cresting wave, or the white marble of a carved poodle with a pillow head, it’s ever present. The supposedly carefree world of suburban enclaves with their fairytale themed playgrounds presents a disturbing image when seen through Humphery’s lens of memory. Perhaps too much Jell-O and marshmallow salad and fluffy white bread in Whitelandia has a deleterious effect on the white blood cells.

A repertoire of cutesy kitschy images like poodle figurines, pairs of fuzzy puppies and kitties, puffs of snow, and rec room doodads begin to take on a more malevolent mood when they are repeated and enlarged. "Movable Wave Hutch" (2004) is an inflated wave balanced on a slim pole with a rolling base, drops as fat as snowballs hang from the crest by links, and litter the floor. Tiny poodle tchotchkes are secreted around the structure and in small niches. Is this a statement on the durability of cute, or some aquarium accessory grown monstrous? In "Crier" (2004), a lightly painted, neutral toned landscape, the torso of a wavy haired boy seems to rest on a large sandwich, his eyes, wide as Lifesavers, excreting tears that flow down and across the bread. He is accompanied by his cuddly pup, while in the foreground a disembodied hand plays on an electric keyboard. The central figure, as in several other paintings, is rendered with a red line, less an example of facility and beautiful brushstrokes than a workmanlike directness that thickens and thins like the paths worn in a lawn through repeated passages. Humphrey’s recent switch to acrylics comes with a lightness and synthetic quality that is conducive to this subject matter. "Baby Sitter," "Horsey Love," and "Snowmobile," all from 2004, employ snow covered grounds, figures in the middle ground, and appliances or vehicles in the foreground. Is this a coloristic contrivance, a desire for the clean bracing chill of a Connecticut winter, or a metaphor for the chilling veneer of domesticity as depicted in the Ang Lee film The Ice Storm? This is a place where teenagers are pretty, their hair is perfect, and recreational vehicles sparkle. You may not be comforted by Humphrey’s dialectical amplifications of the grotesque in the cute, the oppressiveness of the fluffy, or the reinforcement an image receives as it begins to fade. These visions are not unlike those one might encounter while sniffing nitrous oxide and watching cartoons in the basement rumpus room. End of scene… fade to white.

I recently found myself thumbing through a well-worn edition of Charles Baudelaire’s Les Fleurs du mal (1857) and thinking about chance and accidental poetics.