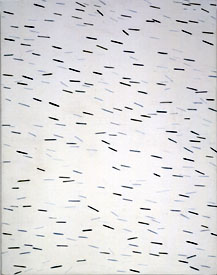 Eve Aschheim’s exhibition, "New and Recent Paintings", April 2-May 22, 2004 is now on view at Larry Becker, Contemporary Art. Spanning a three-year period, from 2001-2004, Aschheim’s approach is methodical and resolute. Her paintings, while small in size, feel much larger than their actual dimensions. The support varies between canvas, panel, or linen indicating that each work is specific to its materials.

The scale of the paintings, the relationship between the support and the markings on the picture plane assert the presence of these as objects – a presence in which the size of the object establishes a direct relationship to the body. Subtle and spare in her use of forms, the canvases are dominated by an all-over whiteness, with black, blue, or graphite markings depicting complex spatial motion and subtle states of mind.

In "White Without Words", 2002 (Dec.), light passing through the painting allows the color of the wood panel to come through and radiate a pink light. The opacity of the material where light is trapped creates a diffusion of light resonating within its surroundings. The color too seems to emanate. Through the deliberate process of accumulating thin layers of paint either by constructing a flat smooth surface with a brush or working with a palette knife she builds and activates surfaces. Simultaneously she demarcates space through drawing delicate shifts in space and light.

The most recent paintings from 2004, consist of thin layers of paint creating a luminous membrane that one can peer into at the point where the bare canvas becomes visible. Though they are not as layered as the earlier paintings, the bareness of the skin-like canvas speaks of the vulnerability of the surface. The notions of visibility and invisibility and the focus on the material does not entirely designate a negation of optical aesthetics, but rather because of the inherent drawing process the work moves between pictorial illusionism and the affirmation of the art as object.

"Clear Lightness", 2002, (Dec.) and "Clear Darkness", 2002 (Dec.), are paintings where I felt as if I may be at the center of a whirlwind of dust. Using small dash lines the particles of matter swirl by. Natural kinetic forces of velocity as reveled through wind and gravity express the artist’s inner experience. Aschheim painted "Dust", 2001 in the aftermath of 9/11. It is the only square painting and at 24" × 24" it is the largest in size. The axis is placed off center; the forms are often ambiguous, slipping away. This painting brings together the aspects of defining and erasing concrete structural space that Aschheim characteristically confronts while suspending them in tension as a formal contradiction. A seemingly ephemeral approach, Aschheim’s method creates a dialectic between her inner world and an outward awareness. She conveys these contradictions without having resolved to evoke them in a singular form. The involvement of openness and the shifting viewpoints of the picture plane fold and unfold in on themselves, while the work’s restraint and ambiguity are generous.

Aschheim finds a non-static solution to painting within the revision of the art object by minimalism. While not imposing themselves the presence of these works are personal and intimate, they mysteriously unveil with each layer the intricate structure of an interior light. Aschheim says the most with the least using her subtle play of reverie and the delight in the act of painting itself.