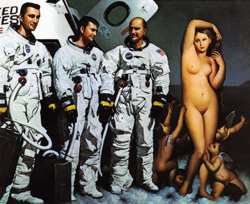 Worldscapes is the first major American exhibition of the Icelandic artist Erró, a joint endeavor between NYU, the Reykjavik Art Museum, and the Goethe-Institut. Along with the mini-retrospective at Grey, a series of paintings titled Femme Fatales is uptown at Goethe, and the lithographs Mao’s Last Visit to Venice are at NYU’s Lillian Vernon Center for International Affairs. The panoply of Erró images and events across the physical and cultural map of New York mimics the painter’s own working method of collection and accumulation along an international route of voracious travel.

The paintings on view at Grey seem to evolve along two related, but different, tracks. The first is a clearly legible style of juxtaposition where the individual elements are crystalline and
concise, and each picture’s wit and irreverence belies a darker core. Early on, stick-form figures with massive heads and little bodies are caught in comic despair as text floats nearby screaming headlines like FLU COVERS THE WORLD (from the 1956 series Radioactivity). Later, the same type of posturing occurs in the lushly painted portraits from the Mega-Make-up series (1959-60), a forceful social critique implicit in the violent images of hybrid machinated-people (in one, a carburetor comes out of a woman’s eye) mediated by stylized surrealist humor, familiar in the French context in which they were made.

A trip to New York in 1962 added Pop to Erró’s repertoire; the saccharine colors and seductive shine had an immediate, lasting impact. But while Warhol, Rosenquist, and Wesselman guaranteed commercial imagery a permanent future in American art, Erró used Pop’s didactic style and slick accessibility to re-present and question history. First this happened in discrete panels. For instance, in the series Forty-Seven Years (1966), American Realist and Russian Realist frames are separated by a pre-historic landscape that recalls the palette and brushwork of Manet. In the seventies, hyper-realist renderings of contemporary events are set into divergent landscapes as in one of the Chinese Paintings (1970-80) "Breeze" where a statue of Mao Zedong sits on the banks of New York’s East River. Alternately, they are paired with historical paintings. In "On Venus" (1975), from the Space series on US astronauts, Erró balances three men, relaxed and confident, in their American flag space suits, emblematic of the everyday macho-man next to Ingres’s voluptuous, nude Venus. A ridiculous duet, each is equally seductive, absurd, and powerful to those who revere their myth and aura. 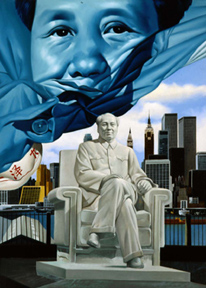 In designing these historical comparisons, Erró’s sardonic sense of humor upstages even the most sacred forms, for they reveal the universal nature of modes of expression, and suggest greater similarities between seemingly opposite cultures and systems. He works from collages – a process he describes as "automatic writing"—then projects them onto canvas. The paintings are painstakingly executed, flawless, and shiny: although devoid of touch, they are rife with politics and opinions. They demonstrate power struggles (particularly Cold War politics and policies) and the shifting definitions of progress; they mock gender roles and address class consciousness (women, devoured by technology, still pose with lipstick and carry the title Madame); and they universally portray an astute respect for, and response to, art history. Manipulated to deliberately engage the viewer in a particular type of reading, these pictures operate like popular culture: consumed quickly, digested easily, and designed to keep the viewer moving forward, unaware of the darker implications they’ve absorbed.

In comparison, Erró’s other strand of painting packs information to the point of illegibility, and demands more time and energy on the viewer’s part. Describing these "eye-popping" pieces in the catalogue, Gregory Volk links them to traditional Icelandic landscape painting, and the influence of living in a country that itself erupts. In fact, many of the paintings feel like a molten explosion. Graphic and grotesque, these canvases operate on a micro-scale, each involving thousands of tiny elements. "L’Abolition of the Races" (1959) is a macabre, frenzied world of fetuses and larvae, surrounded by mythical figures composed of disembodied eyes, spindly legs, bulbous asses, and oversized teeth, pawing and fucking and choking; it remains unclear whether the beings are destroying or salvaging one and other.

"Self-Portrait" (1961), like a Technicolor x-ray, is a deadpan resemblance to Adam in Fred Tomaselli’s painting of the expulsion, and foreshadows the younger artist’s infatuation with the dissonance between altered and normal states. However, while Tomaselli looks primarily to drugs as he investigates human anatomy, Erró’s representation, rooted in post-war Europe, suggests the tortured inner demons of the post-war psyche. Reflecting the fractious reality of France, and the bedlam state of Fluxus (whose French leader, Jean-Jacques Lebel, was a close friend)—in particular, the group’s desire to dissolve art, science, literature, and politics into an experiential fusion of life as art—prismatic rainbows, dissolving corpses, and multicolored fetuses coexist in a psychotic Day-Glo state as in "Swiss Vacation" (1959-62). Titled by a friend, it suggests the ghoulish humor people use to come to terms with normalcy in the wake of atrocity. It also reflects the random and haphazard location of meaning and identity, while turning the naming process into a kind of bricollage that is similar to the way his early collages combine text and image.

By the seventies, these maximalist works had shifted from away from surrealism and into cartoons, a motif that continues today. A cursory glance through the catalogue reveals that these works are not well represented in the Grey show. Filled with popular icons from GI Joe to the Teenage Mutant Ninja Turtles, content is splattered all over the page, resisting meaning and even comprehension. They are comprehensive catalogues stored in a shoebox, shaken and scattered on the floor. In an intriguing addendum, the pieces from the Art History series (1991) show Erró beginning to sort each of the elements into its own tiny partition, so that the whole turns into a wave-like grid.

The largest disappointment in this Erró-fest is the absence of very recent work. It is difficult to fathom that he is not investigating the current East-West rifts. Similarly, his ambivalent relationship to America offers an incisive opportunity to think about our country and the dissonance between how the world sees us and how we see ourselves. The show asks why such a talented history painter has been ignored on this side of the ocean, and as a country, if we are ready to critique ourselves with the same standards we impose on others?

Eamon Ore-Girón: The Symmetry of Tears

In golden and grandiose paintings like cosmological topographies, Eamon Ore-Girón uses a geometric and mathematical language to reconsider the value and meaning of ancient aesthetic systems. Building upon medieval, colonial, and ancient Andean influences, Ore-Girón’s work allows multiple truths to exist in harmony and perhaps suggest new ways of thinking about how the past persists in the present.

One work in the final gallery contains the image of a small pink cross, above which Centurión embroidered the phrase, “renazco a cada instante,” “I am reborn at every moment” (1995). To feel renewed in deep crisis by faith, creation, and love. To be carried forward by small joys, to allow these joys the fullness and purity of our appreciation. This is art, personified.

These two very different tales share few themes beyond the nascent power of young girls and a characterization of the natural world as essential in understanding our own humanity. Where Booker Prize winner Ben Okri’s (The Famished Road) magically graceful environmental fairy tale is full of light and hope, Mónica Ojeda’s Jawbone is rife with gothic body horror and the darkness of the jungle and within ourselves.

Eerie, yet seductive, amorphous, but arranged by the grid of multicolored glass tiles, the extraordinary sculptures of Hungarian artist Zsófia Keresztes are on view for the very first time in the United States.