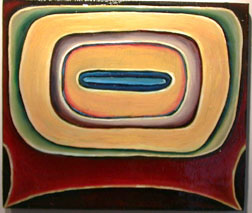 Cristobal Dam and his partner Leah Stuhltrager are artists who, like a lot of Williamsburg folks, also run a gallery. After years of showing the work of others, Dam is debuting his own recent efforts. I was struck by a disquieting quality in Dam’s paintings when I saw them in a group show a couple of months ago. It was a quality that registered with my own predilection for the outsider, the loner going against the grain. In a way, the paintings are a throwback to an earlier age, a time before it was required for every artist to have a strategy, a convenient philosophical or stylistic formula, a gimmick.

A series of small square pictures whose sole compositional element is an irregular circular form seems to bear out the idea that a wealth of engaging and painterly incident can be coaxed out of what might seem an exhausted form if one seeks with diligence. "Complimentary Eclipse" (2004) pictures a blue orb on a yellow ground. The edge and contours of the central form are distinguished by their tonal shift from a cerulean blue center to a dark, near black edge. Likewise the light yellow ground, which provides a robust contrast, shifts to a rusty orange tone at the edge of the canvas. One of the contradictory components of Dam’s work is the glazed lacquered surface that he coats the newest works with, a mixture of damar and spar (a nautical varnish). I’ve written before about the preponderance of "slick" finishes so popular with young painters today. Like the ambient sound in some popular music, it provides a scrim or pane that acts as a homogenizer or a signifier of self-referential hipness. However, for Dam, this may be a point of contrary intent. The image, a rugged primary shape rendered with obvious handmade strokes, seems to negate or at least diminish the immaculate surface. The artist has commented, "I’m interested in getting back to the crude side of painting. The side that has to be seen and not programmed into a computer." 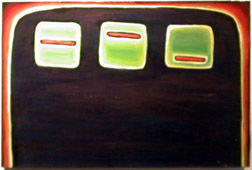 There is also an echo of dry southern landscape with warm earth tones and strong contrasts. Dam has installed a group of small cutout pieces that are constructed from thin sheets of wood which use the painted forms as the actual structure. The shapes are layered, some pierced with holes that also relate to the painted arrangements. A row of these is presented on a long white oval floating on an enameled black rectangle, which could double as a surfboard or an "Atomic Age" tabletop. While recalling the "organic abstraction" of some early masters of American Modernism, the titles like "Three Floating TVs" are intentionally up to the minute. These new paintings are smaller and simpler, iconic though more rigorous, refined to distill the significant form by a reduction of complexity, and extending relevant humanistic abstraction through a meditative subtraction.