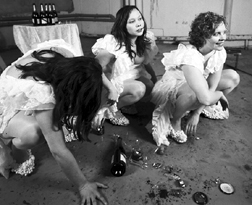 "Mixed media" in the art world has lately meant something very specific: the conglomeration of materials and techniques arranged in a gallery and dubbed "installation." But the mixing of mediums does not always happen in one work; rather, genres may be cross-pollinated through simultaneous and ongoing practices. Two art collaboratives, Chicks on Speed and The Icelandic Love Corporation, recently performed and presented their colorful, energetic, sometimes silly fusions of art, music, and life in New York, gleefully blurring the lines between art and celebrity with a little humor and a lot of sass. In events and exhibitions organized by galleries, both all-girl groups offer up a new, improved type of happening—an elite audience is showered with hipness, and treated to actual entertainment, as opposed to suffering the machinations of conceptual art (none of the Cage-inspired non-drama elaborated by Allan Kaprow in his essay "Happenings" here). Meanwhile, meaning is suspended somewhere in the atmosphere.

Disgruntled art students Melissa Logan, Alex Murray-Leslie, and Kiki Moorse met in 1997 at a bar in Munich, near the Art Academy, and formed Chicks on Speed, an art project-cum-independent electronic music label for their "fake music" (the last time they played New York, the venue was Irving Plaza). The Chicks’ aesthetic is like Hannah Höch gone wild: an allover collage of mass cultural materials, from paper dresses for the stage to an almost abstract medley of breasts on the announcement for their "big mess" at Deitch Projects. The commercial aspirations and successes of the project turn the performances and products into strange utopian economic fantasies. The weeklong installation at Deitch leading up to two performances in the Wooster Street space was a frenzy of making and selling. In the neon chaos of costumes, props, posters, and videos, helpers sewed and the Chicks worked on the music, while the gallery sold their wares. A combo book/bag/ artist statement and $80 limited edition t-shirts smacked more of overpriced lower east side boutiques than affordable art, making literal the crass commercial aspects of the contemporary gallery system, as well as cheerfully embracing our constant desire for stuff, especially hip stuff. Although the band performs with the props and costumes, and videos for the music depict the adventures of C.O.S. dressed like space aliens in their own creations as they wander the streets of Europe, the music does not actually use these materials. Unlike the German art-rock collective Einstürzende Neubauten’s use of junk sculpture to make sound, Chicks on Speed makes art and music that reflect and distort their eclectic, DIY production philosophy.

The Icelandic Love Corporation, "Balancing Globe" (2004), Acrylic sphere, sugar, shoes. Courtesy of Jack The Pelican.
Where Chicks on Speed trades on the irony of selling out, The Icelandic Love Corporation uses romantic iconography in their performances, videos, photographs, and sculptures, which are both heartfelt and silly. Sigrún Hrólfsdóttir, Jóní Jónsdóttir, and Eirún Sigurdardóttir met at art school in Reykjavik and formed a collaborative in 1996 that has turned them into Iceland’s favorite art celebrities. They capitalize on the exotic beauty of their home to weave their invented narratives—dressed in fur coats wandering in the country with guitars on their backs eating hotdogs, they are three housewives on the lam. National associations also function as their mythology—their first performance was kissing each other, not to shock or titillate, but to spread joy and intimacy, and play up their "naïveté" growing up on an isolated island. The love children sprung full-grown from the pop avant-garde union of Björk and Matthew Barney, The Icelandic Love Corporation’s art and performance revolve around symbolic associations of materials and icons woven into fanciful scenarios, like an eagle made of pantyhose to soften the American emblem, kissing a television camera to kiss the nation, or a video of the un-gutting of a codfish to pay homage to Iceland’s main export. Showing no allegiance to particular materials, their fanciful narratives are rooted in the island’s landscape and its metaphorical associations. However, because these fairytales draw on the powerful myths of nature, nationality is defined by place, but embodies ideals that can be communicated to an audience no matter what their origin.