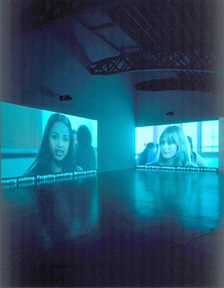 In a video work titled "Twelve," Barbara Kruger continues her original format of combining loaded phrases with imagery. But she sheds the stylized graphics based on fashion magazines and the look of Russian propaganda art that sustained her oeuvre for at least two decades, and presents "conversations" between people in various urban and domestic settings, like luncheonettes, schools, and cafeterias. Twelve scenes of varying length present two, three, or four monumental talking heads of urban types drawn from racial categories: Hispanic, Islamic, Asian, African American, and Caucasian men and women. The scenes are further subdivided into students, journalists and artists, cliques and friends, and family relations (a white nuclear family and a black family headed by a single mother). All of the characters are played by actors to create a clean, mask-like look. Teletype texts of their thoughts run below each image and around the room. Most of the characters are in their late twenties and early thirties, and conversations often begin with critical or offensive remarks, followed by a counter attacks that escalate into unproductive dialogues that leave the protagonists either at an impasse, or emotionally drained and conflicted, between what they think (in the teletype below) and what they say.

The monumental format, and the bombastic yet crude dialogue of "Twelve" reminds us of our ills by displaying our symptoms. People are equally blunt in speaking with each other as in talking to themselves, from the white guys who criticize each others’ eating habits while boasting about their latest car buy, to the woman who blames her girlfriend for her boyfriend’s betrayal, to the abusive boyfriend who challenges his girlfriends request for "space" and then demands a beer, to a theoretical discussion between four artists/critics who display polarized viewpoints in sophisticated terms, yet can’t find a common thread of exchange.

Kruger’s position essentially remains a postmodern one. She is a pessimistic about our ability to bridge the gaps between ourselves, rejecting the idea that what is communicable comes from "grounds deep-seated and shared by men and women, underlying their agreement in estimating the forms of the objects given to both of them." "Twelve" contrasts starkly to the current of the Biennial’s mood of celebration for ideas about cultural freedom and diversity, as well as with Thomas Struth’s recent video piece at the Metropolitan Museum, where faces were projected as presenced subjects. Instead, with Kruger’s characteristic complexity and edge, "Twelve" mines the most polarized levels of personality, where aggression cannot be subverted by the unpredictable insights of unconscious thought.