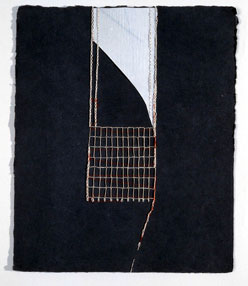 The temptation of complacency in making art is nearly irresistible, particularly when one attains a modicum of success with one’s work. It is always tempting at such times to fall back on technical skills or ideas of what art should be, to substitute these for the uncomfortable, uncontrollable search that is the actual process of art making. Amanda Guest’s show Reworking offers much work that is obviously the product of the latter search. It is therefore frustrating to see in some of her most recent work, a touch of the former complacency.

One striking feature of the show is the marked strength of the pieces Guest returned to work on over an extended period of time. These pieces date back as far as the late 1990s. Perhaps the strongest among them is "White on Black 2," begun in 1997 and finished in 2004. Its composition is roughly centered in a vertical strip along the upright rectangle of the paper’s black, handmade surface. Delicately sewn red and white thread defines its linear structure. A slice of pristine white paper fits snugly into this gentle armature. A twisting vine of red and white thread trails off bottom center. It makes me think of a swing or a lawn chair. Somehow Guest has imparted a sense of outdoor atmosphere to this adamantly surface-oriented piece.

"Breath Again," also begun in 1997 and completed in 2004, is equally intimate, equally strong. A simple grid embroidered on white muslin forms its composition. The edges of the needlework end flush with the beginning of the awkward stretcher bars visible through the thin muslin. This subtle effect unifies the composition and opposes the rough structure of the piece to its delicate needlework.

It is hard not to assume that the strength of "White on Black 2" and "Breath Again" is linked to their development over a period of years. One imagines that the artist’s growth over time is embodied in the work, lending it a connection to lived experience with an accompanying vitality. These pieces could not have been planned.

The same cannot be said of Guest’s Silk Square series, executed in 2004. These pieces, made by sewing into stretched quilted fabric, are slick, accomplished, and predictable. In each, Guest interrupts the grid of the quilted surface by inlaying a square swatch of fabric from which she improvises needlework form—here a curvilinear abstraction, there a chair. These pieces appear to have been largely thought out in advance and, in an art of abstract intuition such as Guest’s, are proportionally staid.

The work in Kristen Fredrickson’s downstairs project room reveals that time spent is not the primary issue for Guest. "White on Red," numbers 2, 8, and 9, show that the artist can complete a successful piece in a single year. Apparently, the dilemma involves willingness to grapple with the uncertainty of seeking form consummate to lived experience, a struggle in which the best of Guest’s art inheres.