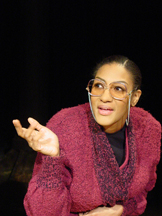 "God bless America," declares a Haitian-American woman—reciting her poem dedicated to "one certain real estate man" with round-worded, witty defiance—"but not because of you."


Ms. Rose Aimee Sylvance is one of fourteen immigrant characters into which Sarah Jones transforms, with quicksilver timing and uncanny attention to her subjects’ physical and emotional landscapes, in her new one-woman show bridge & tunnel.

Set during an annual meeting of amateur poets who happen to be immigrants (they met online), the piece takes place at the Bridge & Tunnel Café, which, as the evening’s host, a Pakistani accountant named Mohammad Ali (also played by Jones) declares, is located in "the heart of beautiful South Queens."

As the relentlessly entertaining Mohammad, Jones nervously delivers string after string of bad jokes and awkward wordplay—"it’s a good one, no?"—introducing each guest poet before slipping into their characters with a simple change of prop—a jacket, some glasses—and a radical change of intonation and persona.

At 29, Jones—of African-American, European and Caribbean descent—moves across age, race and gender with alarming conviction. And she clearly delights in all quirks of translation.

Take the elderly Lorraine, a Polish-German-Lithuanian-American from Long Island, who is impeccably observed, from the tips of her trembling arthritic fingers to her unsettled bemusement at her grandson’s request to call him "Funkmaster Sherovsky." "I’m happy to be here tonight among Moslems!" she innocently declares, before finally delivering her guilt-drenched "protest" poem, set on a bus—"No, Really, Please, Don’t Get Up."

As a 15-year-old Dominican girl from the Bronx, Jones enters noticeably diminished in her slouch, wearing a tight hoodie and self-consciously hiding her face behind her hand. She starts her poem, the treble in her voice high, then chokes and forgets her lines. "I can do it. I can do it," she says to her teacher, off-stage, before starting again and launching into a spoken word poem, a tribute to her sister, "the midnight ghetto daffodil," fusing street and literary poetry in a torrent of passion, vulnerability and pure striving, as only a fifteen-year old girl can feel inside.

The key to Jones’s success is that although she mercilessly mimics her characters and revels in their idiosyncrasies, she never mocks them; her portraits always delve to find the honest struggle beneath the veneer. Well, almost always—the one character Jones completely skewers with her sly humor is a woman from "Australia by way of Williamsburg, Brooklyn," who, dressed all in black, speaks in an Aussie accent laced with an overeducated, bitter hipster patois.

But there is more compassion than not in Jones’s deck.

Introduced as a Vietnamese poetry slam champ, the intense Bao catches us off-guard without a trace of an Asian accent. His poem slams against all assumptions and stereotypes of his culture: "This poem is a slur-proof shield/ And an arsenal of anger to wield/ Every time someone wants a medal from me ‘cause/ They’ve feng-shui’d their pad…"

Juan Jose, meanwhile, tells the story of waiting for his wife, a beautiful girl from Chiapas, lost somewhere between here and there, as she traveled from Mexico wedged into the paneled a/c unit of a bus. Mrs. Ling, who came to America so her children could have freedom, struggles with the unexpected permutations of this gift: a gay daughter. Habiba, a Jordanian accounting friend of Mohammad’s, wearing a hijab, awkwardly tells the story of her first love, reciting Beatles lyrics in Arabic.

By the time even Mohammad recites his poem and we see that which his incessant joking strives to protect, we realize that we have been so caught up in the surprising humor and emotion of Jones’s work, that its political implications have seeped in nearly unnoticed.

Set in the xenophobic atmosphere of post-9/11 New York City—the poetry event moved to its current location when its former host, a Starbucks, was too cautious to have them back—the piece quietly emerges as an allegory of free speech. It shows us immigrants trying to be heard in a country that tries to silence them. As the intrepid Ms. Rose Aimee finally allows her racist, unlikely muse: "God bless your ancestors, mister real estate man, once they were new here, too."

bridge and tunnel is a showcase for Jones’s considerable talent, as she flawlessly adopts one set of cultural and personal traits after the next. Yes, this is the essence of acting. Yet somehow, in the transparency of Jones’s transformations, we are reminded that these identifying qualities are learned. They are the marks of divergent experiences and circumstances, but beneath them is one body. And in her skillful channeling, Jones somehow makes one final transformation—into the actual body of democracy. E Pluribus Unum, indeed.

bridge and tunnel, written and performed by Sarah Jones,

at The Culture Project @ 45 Bleecker Street, through June 14th