When you think of the great images that have come out of rock ’n’ roll, what comes to mind are pictures of, say, Jimi Hendrix holding his arms aloft like a voodoo priest as his guitar goes up in flames. Or, better yet, the inner sleeve photo from Talking Heads ’77 , which, while it doesn’t seem worthy of note at first, becomes so when you learn that the reason for the pained expression on drummer Chris Frantz’s face is that David Byrne has just let out a massive fart. Apparently the great images of rock ’n’ roll are sometimes accompanied by a great stench.

Rock ’n’ roll—the best of it is smelly, unsavory, and just a little bit out of it. Real rock musicians don’t usually look all that cool. (There are exceptions, of course, such as the aforementioned Hendrix and, from the Talking Heads, Tina Weymouth.) When you see a rock musician—one with some kind of real talent, at any rate—offstage, the first question that comes to mind is usually, “What’s wrong with this person?”

This is exactly the sort of question you might have asked had you been lucky enough to see retired postal worker William “Shooby” Taylor playing air saxophone while doing an insane scat vocal on “Over The Rainbow.” Or if you’d chanced upon the sight of dock worker George Coleman lugging his fifty-five-gallon Texaco Firechief oil-can drums to his next gig on the streets of San Antonio or Galveston. Or if you’d been on the cruise Bert Berns from Bang Records devised in 1967 to promote Van Morrison, who had just recently been divorced from his old band, Them. 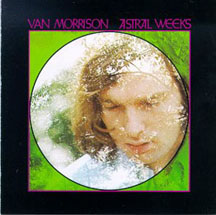 A photograph from the cruise shows Morrison, accompanied by his girlfriend (and soon-to-be wife, then ex-wife) Janet Planet, Bert Burns (looking lecherously past Morrison towards Planet), Jeff Barry (who played tambourine on Morrison’s sessions for Bang), and a mysterious person going by the name of Dr. Sussel, on the deck of the cruise ship as it wanders down the Hudson River. Everyone except for the tambourine player—tambourine players, after all, mustn’t fuck with their gift of rhythm—looks completely soused.

Could Morrison be referring to this photo in the title cut to his latest CD, What’s Wrong with This Picture , when he sings about having “left all that jive behind”? Who the fuck knows? It’s hard to get anything out of Morrison, who—unlike Hunter S. Thompson, for example—didn’t need years of drug and alcohol binges to mumble incoherently during interviews. Morrison was doing that right from the start.

What we do know is that it all fell apart soon after Morrison’s cheery “Brown Eyed Girl” hit the top ten in the summer of ’67. By the end of the year Bert Berns was dead of a heart attack and Morrison, whose relationship with Berns had soured anyway, was looking for a way out of his contract with Bang Records. All that’s left of that get-the-hell-out-of-Bang period are spare, nonsensical songs like “The Big Royalty Check,” “Dum Dum George,” and “Ring Worm,” where Morrison, backed up only by his mournful guitar strumming, sings:

But these are more than just bitter, cynical songs Morrison performed to kill his contract with Bang Records. These songs marked the first time Morrison did exactly what he wanted to do in the studio, and these sessions—which have been released on various labels with titles like The Lost Tapes or The New York Sessions —actually laid the foundation for Astral Weeks, Morrison’s dark, moody masterpiece and arguably the greatest outsider record ever made.

Yes, Morrison, who sang and wrote the aforementioned “Brown Eyed Girl,” as well as “Moondance” and other classic rock standards, is an outsider. Which is to say that he is among that class of musicians who, though they may have talent in varying degrees (from zero to infinity), have no idea what they’re doing. Or at any rate, no conscious idea. Morrison is among that class of outsiders with real talent that includes—as music writer Irwin Chusid wisely notes—someone like Brian Wilson, who, as skilled as he may be, would never be described as someone who knows what he’s doing.

Take Morrison’s bizarre scat singing. You can hear its early development in “Brown Eyed Girl,” when, at the end of the song, as he starts singing “Sha la la la” through to the fade-out, it sounds like he’s starting to get angry. He’s spitting out the “la la” sound like an angry toddler who isn’t able to put his anger into words yet. Then, in Astral Weeks , you begin to see Morrison’s technique of rapidly repeating phrases over and over again, as in “Beside You,” where he frantically sings, “You breathe in you breathe out you breathe in you breathe out you breathe in you breathe out…” By the early seventies, in songs like “Listen to the Lion” and “Caledonia Soul Music,” Morrison had developed a scat language that consisted of grunts, moans, and all sorts of heavy breathing—the kinds of sounds you’d hear by hanging out too long in the men’s room at Penn Station. That Morrison made this work is perhaps evidence of his genius as a singer. Still, no singer in his right mind would ever consciously attempt this sort of thing. 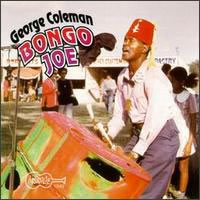 It is by no means a stretch to compare Morrison with outsiders like Shooby Taylor and George Coleman, who, though they were far from Morrison’s equals in talent, made music that was just as intriguing.

A “rapper” in the sense that he rarely actually sang, Coleman (who died in 1999) accompanied himself on his homemade oil can drums. These were not steel drums, mind you, but empty petroleum containers—Coleman’s music bears no resemblance to those light-hearted percussion-fests of Trinidadian steel drum bands. His song “Innocent Little Doggie,” for instance, relates the tale of a tick-infested mutt who gets hit by a car and finds itself lying crippled in a ditch. Comparing the situation of a man on Skid Row to that of the dog, Coleman finds that there isn’t much difference—except that the dog is worthier of rescue than the man. But Coleman is no animal rights fanatic, and his tale is not so much a comment on the inherent goodness of animals as a critique on the deviousness of man.

In “Transitor Radio,” a woman “inhaling dust, spitting out dirt, grass in her hair, dirt in her mouth” wails over the grave of her husband. But it’s not the death of her husband that’s making her sad, it’s the fact that he’s being buried with her precious transistor radio. Though Coleman’s songs are not without their sense of humor, the sense of humor they display is, undeniably, a very dark one.

While Coleman reflected Morrison’s dark, brooding side, Shooby Taylor reflected Morrison’s flip side—the side you see on upbeat songs like “Jackie Wilson Said (I’m in Heaven When You Smile).” Taylor, whose vocals consisted entirely of him using nonsense scat syllables to approximate what he called “the Human Horn,” recorded some fourteen songs at a studio in New York City in the early eighties, then disappeared. But soon after a WFMU DJ got ahold of these recordings in 1989 and played them on the air, the legend of Taylor’s music grew. And for good reason: There’s nothing else like it in the world.

Take Taylor’s version of “Stout-Hearted Men” (perhaps Taylor’s most popular song), which starts, “WEEB, shoo shoo SAW, shoo shoo SHWA / Shoo do PLAW, do do RAH / Do do saw, do do raaaaah / ShoodeliDWIdop! Shoodelido-dePLEEbop!” After scatting the melody of the song, he forges ahead into the realm of jazz improvisation, often using “POPPY POPPY” or “SCHWEE” when mimicking a saxophone’s upper-end squeal. The cassette goes on to feature Taylor scatting standards both secular (“You’re Nobody ’til Somebody Loves You”) and spiritual (“Just a Closer Walk with Thee”), as either an organ player or a scratchy old LP provides the only musical backing. It is, undoubtedly, rather strange. But once you get over that, the effect is nothing short of exhilarating.

William “Shooby” Taylor, broadcasting. Photo courtesy Irwin Chusid: www.keyofz.com
Taylor, who died last June, had no idea that he had fans who actually appreciated his music until the last year of his life, when he was living in a nursing home in Newark. Most of his public performances, such as an appearance on Amateur Night at the Apollo Theater in 1983, were treated as jokes. Nevertheless, of the three musicians discussed here, Taylor was the one who took music out the furthest. That he was probably the musician who had the least awareness of what he was doing does not diminish this achievement. 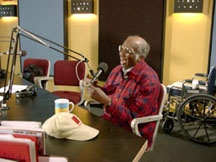 Taylor, Coleman, and Morrison are all artists whose originality makes their music unfathomable for some. Indeed, although he has achieved a fair measure of fame, Morrison is still often referred to as a “cult” artist. Which is to say that he hasn’t reached the sales levels of someone like, say, Dave Matthews, whose music, though infinitely marketable, lets loose a stench that’s infinitely greater than that of David Byrne’s most massive fart.

This isn’t to say that Dave Matthews doesn’t know what he’s doing as a musician. He does, in fact, know exactly what he’s doing—and that’s the problem. The best rock ’n’ roll, jazz, and even perhaps the best classical music (would anyone disagree that Mozart was just a little bit out there?) come out of a certain sense of obliviousness, a failure to completely grasp the concept of what’s “right” and what’s “wrong” in music.

Of course, not all outsiders can reach the same heights as Morrison, Taylor, or Coleman. But even the worst outsider music is more intriguing, more powerful, and, above all, more honest than most of the professional product that gets played on popular radio. And even though they may get laughed at from time to time, that’s the price the outsiders are willing to pay. It’s a price not many musicians can afford nowadays.

José Padua's fiction, nonfiction, and poetry have appeared in many publications. He is co-author of the blog Shenandoah Breakdown.

Troy Montes Michie’s Dishwater Holds No Images continues his use of textiles to tell stories of resistance, and expands his work in collage into a space-consuming format.

Alec Soth: A Pound of Pictures