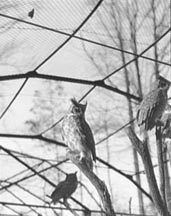 While many New Yorkers consider Columba livia, or the conventional street pigeon (an estimated 7 million of which live in New York City), the only bird in town, for Paul Sweet, collection manager of the Ornithology Department at the American Museum of Natural History (AMNH), it accounts for less than a dozen of the over 800,000 bird specimens he must care for. As Sweet walks through the museum’s research offices and storage areas, carrying a set of keys fit for a locksmith, or the super of Co-op City, he mentions a certain geographic region or type of bird and locates the specimen in a matter of seconds. He finds Garrulax milleti sweeti, a subspecies of the Black-hooded Laughingthrush that was discovered in the highlands of Vietnam and named in Sweet’s honor, with more ease than most of us find our MetroCards. “Taxonomically, the collection is very well organized,” Sweet explains, dismissing the notion that he is the only person in the world who could find his way around a collection that includes not only bird skins (the technical term for a stuffed bird specimen), but thousands of bird nests, eggs, DNA samples, and skeletons.

Despite its comparative youth (the museum was founded in 1869 and the Department of Ornithology in 1885), the AMNH’s bird collection is considered by many scientists to be the most comprehensive. Amassed during the 1920s and 1930s, the collection grew as a result of expeditions to Congo, Madagascar, New Guinea, and Amazonia, as well as through the rising and declining fortunes of some of Britain’s and New York’s wealthiest families. While the Whitneys were busy sponsoring bird collecting trips for AMNH curators, Walter Rothschild, heir to the Rothschild banking legacy, was forced to sell a significant portion of his extensive private bird collection. Walter, who had started collecting insect specimens at the age of 7, and declared not long afterward, “Mama, Papa, I am going to make a museum,” found himself at the age of 64 being blackmailed by a former mistress and in need of ready cash. Much to the muted dismay of British Museum scientists and curators, just under 280,000 bird specimens from Rothschild’s collection were purchased by the Whitneys for AMNH in 1932, making the collection in New York the largest, and most diverse, in the world.

Conservation is now the rationale behind many new acquisitions of bird specimens. “We are in a triage type situation,” says Sweet, regarding the preservation of natural habitats and species. “There are so many areas in the world where bird habitats are being destroyed, that we have to focus on which are the best areas to preserve in terms of maximum biodiversity. We know that in the last two centuries over 100 bird species have been lost because of human activities and that hundreds more are threatened with extinction due to the pace of development.” A current museum project collecting data on bird species in Vietnam will help the Vietnamese government set priorities for designating areas as national parks and protected reserves.

Although the standard classification of birds goes back to the 18th century, when Linnaeus developed the binomial classification of genus and species, species classification is subject to its own types of evolution. In 1900, according to then-current classification systems, there were estimated to be over 20,000 species of birds. But by the 1940s, when the biological species concept emerged, the number of bird species was re-classified to less than half this number based not on the distinct characteristics of populations—as former classification systems had been—but on the potential to interbreed. “Correct classification of species is particularly important to conservation because it is at the species level that governments are more likely to step in to prevent the destruction of habitats,” Sweet explains.

Using the North American Spotted Owl as just one example in the current species debate, Sweet stresses that there are distinct populations of Spotted Owls in the Pacific Northwest, California, and Southwestern United States. The question, then, is whether there is only one species or, based on distribution and genetic differences, three. If it is decided that there is only one species, conservationists fighting the expansion of logging of old-growth forests in the Pacific Northwest will hear the timber industry dismiss claims that the “species” is endangered. But if the three subspecies are reclassified as species, the government will have to increase levels of protection for each of the distinct populations and habitats.

Pointing out variations in beak shape and markings between two currently recognized subspecies of babbler from Southeast Asia, Sweet himself seems a bit amazed by the differences. “Even now, we’re finding new species of birds. In an isolated mountain range in southern Vietnam, researchers recently discovered three new species. Although there may be birds closely related to these species only a short distance away, they may never come into contact with each other. A mountain is like an island for a bird. There is no way for them to get to the next mountain top and it is through this isolation that speciation occurs.”

Warren Neidich: The Brain Without Organs: An Aporia of Care

At the Museum of Neon Art, The Brain Without Organs: An Aporia of Care, takes a radically deconstructive approach to the brain as a material organ and as an emblem of human intellect, the source of our unique evolutionary advantage.

Paul Pagk, a British-American-French artist based in New York, demonstrates his mastery of color and painting. His first solo exhibition with the gallery in Lower Manhattan was on view until July 9, 2022, at Hionas Gallery.

The sculptures, installations, films, and videos in Cuentos de cuentas/Accounts of Accounting, Zaccagnini’s first solo show in the US, contain similar anecdotes that are at once purposely naïve and endearing.

Ecologies of Care, Ani Liu’s current exhibition at Cuchifritos Gallery and Project Space, uses the language of technology and material culture to confront the all-encompassing, messy, pressured experience that is contemporary motherhood and thrust it front and center.