Even with growing popularity of theatrical documentaries, nonfiction still doesn’t seem to warrant a fraction of the publicity money that goes to awful fiction films. This makes those important docs that you "really meant to see" in the theater even easier to miss. So, for all that are often awed by the variety, drama and original perspectives that the form offers (usually those who remember to take a multi-vitamin along with a Red Bull), here are some of the docs that are premiering in April at independent theaters that need your support. —Williams Cole 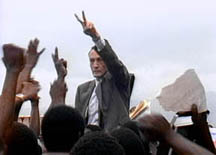 As the unrest in Haiti continues its uncertain path, Jonathan Demme’s portrait of Haitian national hero, journalist and militant activist for democracy Jean Dominique is more relevant and insightful than ever. Dominique, the founder of Haiti’s oldest and only free radio station, was greeted by crowd of 60,000 upon his return from exile in 1986 only to be exiled again and then assassinated in 2000. Demme was a close friend and has made an intimate and crucial portrait of Dominique and his wife Michele Montas while presenting a contextual history of the beleaguered nation that will help everyone make sense of the chaos and the U.S.’s role in such instability. With an original soundtrack by Wyclef Jean and Jerry “Wonder” Duplessis.

Stretching the inherent elasticity of the documentary medium, Albertina Carri’s film about the loss of her parents to the military junta during Argentina’s “dirty war” puts the politics of the 1970s in Brechtian relief. Carri has an actress play herself as she explores the memories of friends and neighbors who actually knew her parents. Here, the production process is exposed and a daring personal viewpoint is apparent as narrative risks are taken that are a world away from anything seen on such nonfiction venues as the Discovery Channel. 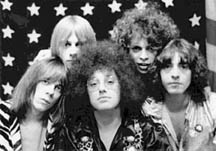 This film about the politically militant late ’60s–early ’70s Detroit-based rock band will please those who embrace late ’70s Punk, ’80s Metal and perhaps even ’90s “Grunge” and corporate “punk.” Geezers will be able to point out that the Real Thing began when they were young ones and the story of how the MC5 were rewarded with critical indifference, broken contracts, police hassles and the censorship and suppression of their music will break all hearts. In their own words, the MC5 became “perfect targets for the double-cross” and were relegated to a forgotten corner of rock history. Hopefully, this film changes that.

Weeks of order cancellations. Mounting dread. The March 12 shutdown of all Broadway theaters. Then the following Monday, Mollie Thoennes was told to collect her things and stay home. There was no return date.